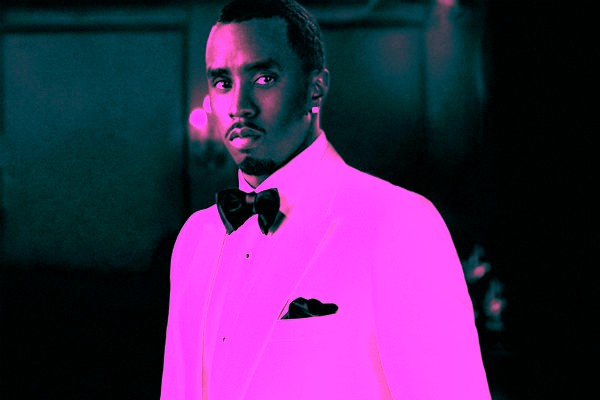 The first level is almost entirely glass on two sides; you can see the Pacific from every corner. As you stand at the center of the great room with all the glass doors open to the temperate climate, an infinity pool in front of you bleeds into the edges of the ocean and the sky.

There is a curated Cîroc collection to the right and artfully framed family photos to the left. Within moments of entering, a member of his staff offers you a drink and sets out a lovely spread of hors d’oeuvres.

A chef waits for you to appear hungry. Music streams overhead, first from Nigeria’s Afrobeat pioneer Fela Kuti, then Michael Jackson’s Off the Wall album. I dub the playlist “Global Black Dopeness” in my mind for how it broadcasts the man who lives here. As I wait for Combs to join us, a steady flow of casually dressed people attend to my comfort. The hospitality is both overt and inconspicuous. You will enjoy yourself here or someone will die trying.

We are meeting on a blustery West Coast day, a Friday. Mr. Combs is hard at work. Emergency calls keep him from joining us right away, and I wonder what constitutes an emergency for a global celebrity businessman. People scuttle up and down the staircase with a deceptive lackadaisicalness that feels more L.A. than the Harlem hustle that produced an ambitious young man the world would first meet as Sean “Puffy” Combs.

His publicist says they used to take summer Fridays, that mythical thing I have heard of where New Yorkers break early on Friday afternoons to escape the city heat. For all the trappings of ease, this is clearly still a place where work gets done.

Combs descends the stairs just as a house staff person (I have no idea what you call a waiter in a private home) replaces my first glass of red wine with my first glass of champagne. Impeccably groomed, he still walks like a Harlem dude. It is an attitude as much as it is a rhythm, although he does move like a gymnast or dancer.

Combs is wearing the classic hip-hop uniform that he helped enshrine in our popular imagination: white tee, track pants, and diamonds. A nameplate necklace with “Love” in bejeweled rose and white tones glimmers like neon pop art. He welcomes me and my assistant with a bear hug. When I mention it is one of my first hugs since COVID-19 made human contact feel dangerous, he comes back in for another. Sean Combs likes to spread love.

After taking a few more calls and offering a sincere apology for keeping me waiting, Combs moves our chat outside. His instincts for mise-en-scène are on full display. We sit on a wooden bench at the edge of his infinity pool like sweethearts as he instructs his staff to make the setting “sexy.” That means moving a centerpiece of pink tea roses from inside to our feet, for ambiance.

He calls for an ebony pashmina—not a blanket, he specifically asks for a pashmina—to help me ward off the chill in the air. I am settled, but he thinks I could be more comfortable. He wraps me in the massive woolen throw like a burrito, fixing the edges to his satisfaction. His hands are elegant and competent, much like the man himself. I tell him he was obviously raised right, and he concurs easily. “I love the company of women and I take care of you,” he says. It is his way.

Warmed inside from the wine and outside by the worsted wool, I get down to business. Combs is not hesitant. He knows what he wants to talk about. “I actually sit here every morning, it’s where I come and I meditate.… I’m not going to lie; this ocean saved my life, changed my thinking,” Combs tells me.

The man who turned hip-hop culture into a global lifestyle brand in the go-go 1990s has a lot to think about during the cultural upheaval of the 2020s. “I am the happiest I’ve ever been in life, I laugh the most, I smile the most, I breathe the most,” he tells me. In a word, Combs has love on his mind.

Born Sean Combs in Harlem in 1969, the 51-year-old businessman has had several names through the years. His staff talks about these as eras.

“Love” is Combs’s latest nom de plume. Born Sean Combs in Harlem in 1969, the 51-year-old businessman has had several names through the years. His staff talks about these as eras. I ask Combs if that is how he thinks of them. “Yeah, I do,” he says without hesitation. The name changes are about the almost-billion-dollar brand he built. Each one signals an ideology and a strategy. Combs calls them off easily enough. “You have the Puff Daddy era, that’s like this young, brash, bold hip-hop, unapologetic swagger on a million and just fearlessness and really doing it for the art and rooted, the only thing I know is hip-hop. I don’t know about changing the world or anything like that as possible.” The Puff Daddy era is not just Combs’s cultural foundation, it is also a defining moment for pop culture.

As the late 1990s were giving way to the 21st century, Sean “Puff Daddy” Combs had taken hip-hop iconography to scale. Much has been made about the shiny suits and over-the-top videos that made Bad Boy Records, Combs’s eponymous record label, a massive hit factory. Perhaps too much has been made of it, at the expense of understanding what Combs meant in the culture. It is something to which his team is very sensitive—what they might think of as his rightful context.

In fairness to the audience, it was hard not to be distracted by the shiny things. They were designed to distract. The visuals, the braggadocio, and the drama kept us entertained in the 1990s and early 2000s. But beneath the showmanship was Combs the innovator. He understood hip-hop as a lifestyle at a time before “influencer” had entered our cultural lexicon. His image looked larger than life in 1999, when consumers watched music videos on television and bought clothes at shopping malls.

We were still sending SMS messages on our cellular phones and two-way pagers as Combs was making hip-hop art that predated visually-driven social media culture. He was a GIF machine before we knew what a GIF was or how, 15 years in the future, making viral content could turn anyone into a celebrity. Most of the celebrities from the Puff Daddy era are locked in a social media liminal space.

Try to find, as I did recently, an Insta-quality image of your defining pop culture memories before 2010. There may be some YouTube videos or a few grainy GIFs. You will remember the moments as important, the actors as celebrities, but they were massively huge before we had the technology and taste for content. Content is now king, and Combs was one of the first mega-celebrities to turn music, art, fashion, and branding into a content machine.

Click here to read the remainder of the amazing story of From Puff Daddy To Diddy To Love, The Reinvention Of Sean Combs.