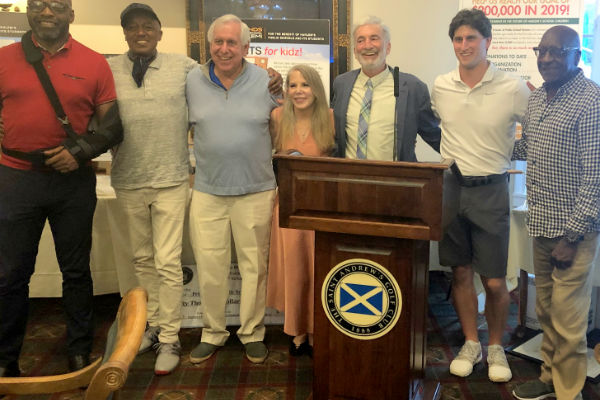 Supporters of Friends of Public Schools Harlem boosted by a matching grant by the Migdol Family Foundation raised $200,000 at their Annual Golf Tournament to provide needed resources to Harlem’s public schools and its students so that Harlem’s students can learn, compete and achieve. In the last month, the organization has distributed more than 4,000 backpacks and school supply kits.

“These schools in Harlem’s District 5 rank 735th within New York City’s 805 school districts,” said FPSH Board member Jerry Migdol. “So the urgency to contribute funds and resources is all the more important given the lack of government funding. These kids need the help we are providing so much more than ever before. We aim to level the playing field by giving this generation of Harlem students an equal opportunity to learn, compete and achieve”

“On behalf of the parents and children of our district, I would like to extend a heartfelt thank you to Friends of Public Schools Harlem and the Migdol Family Foundation for your generous donations of backpacks and school supplies,” said State Senator Brian Benjamin. “These school supplies send a powerful message to families letting them know they are not alone and have a real impact in a child’s success in the classroom and in life. You have continuously committed yourself to our children throughout the years by demonstrating through your contribution of more than 4,000 backpacks and school supplies. You have made a tremendous impact by enabling students to come back to school prepared with basic school supplies.”

Assemblyman Al Taylor added, “During the Back to School events, I saw firsthand how parents and children were elated and deeply impacted that they had received school supplies and backpacks. Many families wouldn’t have been able to afford the items that were given to them, but through the generous donation of the Friends of Public Schools Harlem and the Migdol Family Foundation, I know that children’s lives were transformed because they were given essential tools that would allow them to succeed in school.”

The winners of the golf tournament were the team of Chris Jackson, Gerald Coulston, Michael Coulston, Aaron Migdol and Jerry Migdol.

Friends of Public School Harlem Inc. (FPSH) is a non-profit that provides much-needed resources to Harlem’s public schools and its students so that Harlem’s students can learn, compete and achieve. It seeks to level the playing field so Harlem’s students and schools can reach their full potential and feel the success they are capable of and want so much to achieve by donating resources to the students and the public schools of Harlem. To date, FPSH has donated over $600,000 in conjunction with the Migdol Family Foundation and given over 15,000 school supply kits for kids, 500 computers and iPads, and this year we will be giving away another 4,000 school supply kits along with backpacks for Harlem’s public schools.