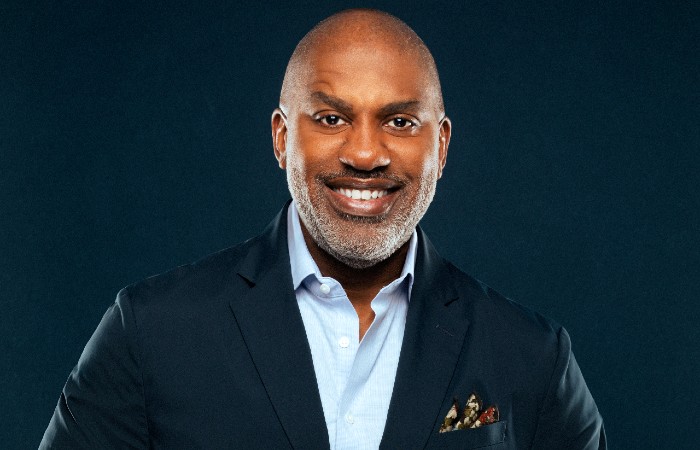 The Harlem Globetrotters, are world-famous for originating basketball style with skilled athletes of the highest order.

Showcasing their iconic talents in 124 countries and territories on six continents since 1926, have big plans to elevate the historic brand beyond the court.

As part of the Globetrotters’ continued evolution from a live event business to a global entertainment brand, parent company Herschend Enterprises has brought in award-winning media veteran Keith Dawkins to lead the transformation.

Dawkins, who spent 17 years at Viacom (now ViacomCBS), was elevated to the position of Executive Vice President at Nickelodeon where he oversaw and grew some of that brand’s most beloved and successful networks.

Dawkins also launched the Nickelodeon Sports initiative which saw him strike strategic partnerships with the likes of NFL, NASCAR, the PGA Tour, MLS, WWE, and a variety of pro athletes.

After his run at Nickelodeon, he went on to lead the internationally renowned junior golf nonprofit The First Tee, and was most recently Founder and CEO of Rock Hill Media Ventures.

There, he forged partnerships with the National Basketball Players Association and Believe Entertainment, the developing studio of Dear Basketball – the Oscar® and Emmy® Award-winning short film from Kobe Bryant – and The LeBrons, an animated series from the mind of LeBron James.

“As we head toward a tremendous milestone, marking our 100th year, there’s never been a more exciting time for the Harlem Globetrotters,” said Herschend Enterprises CEO Andrew Wexler. “With ambitious plans in place for new content and branded media ventures, we know Keith will bring the perfect blend of expertise and drive needed to propel us to the next level.”

The Globetrotters content expansion into millions of homes worldwide is powered by its parent company’s in-house media arm, Herschend Entertainment Studios (HES), which develops and produces 360 franchises of wholesome entertainment worldwide for TV, film, publishing, licensing, and other media.

“I grew up on the Globetrotters. Their rich history of entertaining and inspiring kids and families, both on and off the court, is undeniable,” said Dawkins. “They are basketball royalty and we have a unique opportunity to expand the brand and reach an entirely new, diverse generation of fans by amplifying the way we do business.”

A fresh look for the team also made headlines this past year, with world-class designers creating new team uniforms – stepping up the swag while still paying tribute to the brand’s rich and iconic history.

“From content to marketing consumer products and international development – we look forward to bolstering the Globetrotters brand so it continues to thrive for another 100 years,” stated Dawkins.

The originators of basketball style, influencers on today’s game, and skilled athletes of the highest order, the world-famous Harlem Globetrotters have showcased their iconic talents in 124 countries and territories on six continents since their founding in 1926.

Proud inductees into the Naismith Memorial Basketball Hall of Fame, their mission to spread game and bring entertainment to the world continues to drive them today.

The Globetrotters are basketball innovators who popularized the jump shot, slam dunk and half-court hook shot.

For nearly a century, the Globetrotters have exhibited Black excellence on and off the court, entertaining, inspiring, and uniting families.

The Harlem Globetrotters International, Inc. is a subsidiary of Herschend Enterprises, the largest family-owned themed entertainment company in the U.S.

For six decades, Herschend has operated with the purpose of bringing families closer together by Creating Memories Worth Repeating®.