They are announcing that the first two Requests for Proposal (RFPs) for early work for the City’s Borough-Based Jails Program will be issued in the first quarter of 2020.

The announcement was made at an Industry Day event held yesterday at DDC headquarters in Long Island City for firms and companies interested in learning more about the program and how to participate. More than 200 industry professionals representing 122 firms attended the event.

“In evaluating responses from firms that want to contract with us, DDC will emphasize a proven history of exceptional performance along with good labor relations and the ability to meet important diversity goals, while seeking innovative designs that will become civic assets in the years to come.” said DDC Commissioner Lorraine Grillo. “The response to our Industry Day event indicates there’s great interest in our Design-Build program by designers and builders.”

DDC last week issued a Notice of Intent detailing the release dates of Requests for Qualifications (RFQs) for the seven total Design-Build contracts anticipated under the Program, three for necessary early program work in Brooklyn and Queens and four for the Design-Build teams that will construct the four Borough-Based Jails themselves.

SOQs will be evaluated to create short-lists of firms that are deemed qualified to respond to seven total RFPs. Up to three vendors will be short-listed per project. Responses to the seven RFPs will then be evaluated and will lead to contracting with the Design-Build teams that will perform the early program work and construct the four new facilities.

In order to be eligible to respond to an RFP, firms must have responded to an RFQ with an SOQ and been selected to progress to the next stage. The schedule for issuing RFPs was presented at Industry Day, though DDC officials noted that the schedule could be moved up depending on the volume and quality of responses DDC receives to its RFQ for the new facilities: 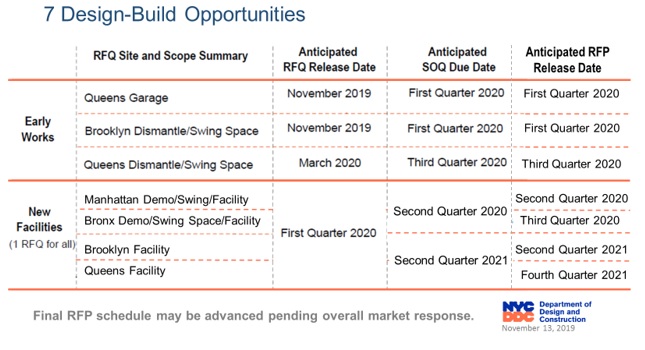 In selecting the Design-Build teams and carrying out a collaborative Design-Build approach to project delivery, DDC is committed to using best practices as defined by the Design-Build Institute of America. In accordance with the Rikers Island Jail Complex Replacement Act of 2018, DDC will utilize a best-value selection that prioritizes design, quality, past performance and qualifications. DDC today also committed to providing stipends to short-listed firms that participate in the Proposal (RFP) process, but are not selected to be awarded a Design-Build contract.

The City also highly encourages participation in the jail’s program by Minority- and Women-Owned Business Enterprises (M/WBEs), and will set significant requirements for M/WBE participation in the program’s Design-Build contracts. To learn more about how eligible firms can become certified as an M/WBE, please visit: https://www1.nyc.gov/site/sbs/businesses/certify-with-the-city.page

To learn more about the roadmap to closing Rikers, please visit:
https://rikers.cityofnewyork.us/nyc-borough-based-jails/