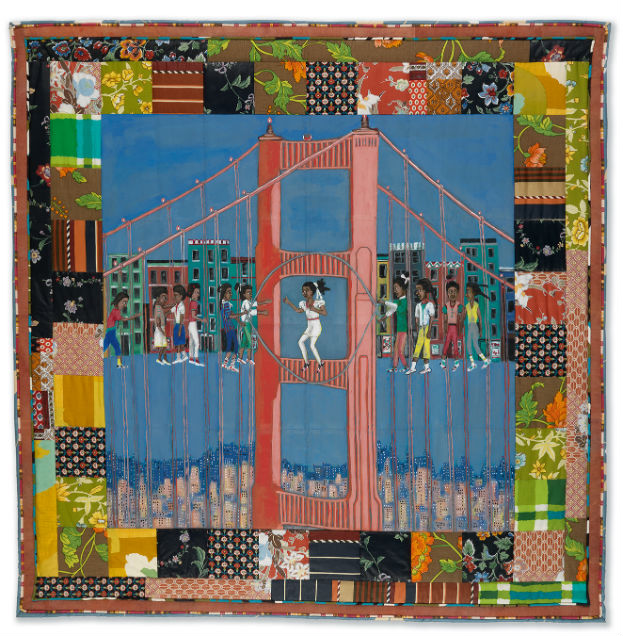 She Persists: A Century of Women Artists in New York City coincides with the centennial year of women’s suffrage and is the first of its kind in Gracie Mansion. The exhibit includes emerging and established artists including: Kara Walker, Cindy Sherman, Alice Neel, Diane Arbus and Faith Ringgold. She Persists is intended as a forward-looking celebration of the 19th amendment which granted women the right to vote on June 4, 1919.

“I’m excited that we are beginning this new year with She Persists, a powerful exhibit of artists who are all women and exceptional, and displayed on the walls of Gracie Mansion for the very first time,” said First Lady Chirlane McCray. “Because these women were viewed as having lesser value than men, and even lesser value if they were women of color, how and why their work was created has additional significance. It is important that their personal stories and struggles are front and center along with their art.”

A wide variety of objects are featured in the exhibit including paintings, sculpture, film, photography, craft, design, and archival materials. All of the participating artists have had formative experiences in New York City. The exhibition is organized across four central themes: contending with history; the body as a battleground; picturing people; and expanding abstraction. The exhibition also includes a brochure, website, public programs, and a middle-school social studies curriculum.

“She Persists is a poetic look across one hundred years of prodigious creativity by women artists in New York City,” said NYC Cultural Affairs Commissioner Tom Finkelpearl. “With a sensitive touch, Jessica Bell Brown has woven a story that will be delightful for visitors to ‘The People’s House’ while telling a story of brilliant art too often overlooked in traditional art history.”

The public exhibition builds on the work of the de Blasio administration to support the arts and gender equity in New York City, as recently exemplified by “She Built NYC,” which will erect monuments to important New York women. She Built NYC has commissioned a public monument to Shirley Chisholm in Brooklyn’s Prospect Park.

“She Persists is an amazing opportunity to reflect, through works of art, on the incredibly important contributions women have made to New York City and the world,” said Thelma Golden, Director and Chief Curator of The Studio Museum in Harlem. “The Studio Museum in Harlem is honored to be a part of this significant initiative saluting the legacies of women’s suffrage, feminism, and artistic representation.”

Curator Jessica Bell Brown is an art historian and independent curator based in New York City. Brown was previously the Museum Research Consortium Fellow in the Department of Painting and Sculpture at The Museum of Modern Art in New York, where she was a member of the curatorial team for Robert Rauschenberg: Among Friends. Her essays and art criticism have appeared in catalogs and publications for The Studio Museum in Harlem, Lévy Gorvy, The Museum of Modern Art, the Institute of Contemporary Art Philadelphia, Flash Art, Hyperallergic, and The Brooklyn Rail. She is currently a Ph.D. candidate at Princeton University in the Department of Art & Archaeology.

“I was thrilled to receive the invitation from the First Lady to curate more than 60 artworks, objects, and archival ephemera on view,” said Curator Jessica Bell Brown. “Ranging from the earliest years of the 20th century to the present, these works tell the story of women’s tenacious endurance and the ways that women artists have persistently used their art as platforms for dialogue about feminism and women’s rights, LGBTQ+ advocacy, AIDS awareness, immigration, and gentrification. Spanning ten decades of art produced by women, She Persists is a celebration of women’s contributions to culture and the great city of New York.”

“The very breadth of work included in She Persists is a powerful reminder of the diversity of New York City,” said Melissa Browne, Executive Deputy Director, Gracie Mansion. “It is important that the thousands of New York students who visit Gracie Mansion each year are able to see themselves reflected in the exhibits at Gracie Mansion. I hope that when visitors leave they remember Gracie Mansion as The People’s House.”

She Persists is especially relevant in the era of the #MeToo movement and renewed attention to women in arts and politics. The exhibition’s name is a play on a feminist rallying cry that began after Senate Majority Leader Mitch McConnell in 2017 attempted to publicly silence Sen. Elizabeth Warren.

The exhibit was made possible with the generous support of The Ford Foundation and The Helen Frankenthaler Foundation. While some of the objects were already a part of the Gracie Mansion Conservancy collection, more than fifty lenders contributed to She Persists.

The Gracie Mansion Conservancy is a not-for-profit organization established to preserve, maintain, enhance and enliven Gracie Mansion. Gracie Mansion is one of the oldest surviving wood structures in Manhattan and home to the sitting mayors of New York City, beginning with the LaGuardia Family in 1942. The Conservancy provides public access via tours, programs, and diverse media platforms with a goal of illustrating the rich history of New York.

The artwork and objects featured in the installation will be integrated into Gracie Mansion’s existing artwork to reflect the diverse experiences of New York City’s inhabitants.

Highlights of She Persists: A Century of Women Artists in New York 1919-2019 includes:

Barbed Wire (Separation) (1954)—This print by Elizabeth Catlett describes the past determination to overcome the injustices of slavery and sharecropping as a metaphor for the struggle that continues today. Catlett’s work is a mixture of abstract and figurative forms in the Modernist tradition, with influences from African sculpture and Mexican muralism. She often said that the main purpose of her work is to convey social messages rather than purely aesthetics. For nearly 75 years she used her art to advocate for social change.

Lost in the Music (2017)—Tourmaline (formerly known as Reina Gossett) and Sasha Wortzel both explore the intersections of and activism and worked together to create Lost in the Music. Tourmaline was the 2015 artist recipient of the George Soros Justice Advocacy Fellowship from the Open Society Foundation for her work with LGBTQ people navigating the criminal justice. Sasha Wortzel is a New York-based artist and filmmaker originally from Florida. She blends documentary techniques and fictional narratives in order to explore how structures of power shape our lives around race, gender, sexuality, and place.

Invasive Species( to be placed in your native garden) (2017)—Kara Walker is a painter, print-maker, sculptor, and filmmaker exploring American history through a lens of intersectional identities including gender, race, and sexuality. Invasive Species summons a recurrent theme of human migration and displacement and the resulting advent of hybrid cultures embraced by some while reviled by others.

Sun Spot (1954)—Helen Frankenthaler a lifelong New Yorker, (1928-2011) helped to define post-war American abstract painting for more than 60 years. Her originality and experimentation with materials grew out of Abstract Expressionism and influenced generations of artists.

My Playground (1980)—Perla de Leon was born in Harlem. When the photographer arrived at her first assigned school in the South Bronx in the late 1970s, she was shocked at the neighborhood’s physical decline yet was determined to record the resilient African-American and Puerto Rican residents.

A series of celebrations for “She Persists” include:

Doors open to media on Tuesday, January 22 at 4:00 PM, at Gracie Mansion

To learn more about the Conservancy or to reserve an individual or school group tour of Gracie Mansion, please visit the website at nyc.gov/gracietours or call 212-676-3060.