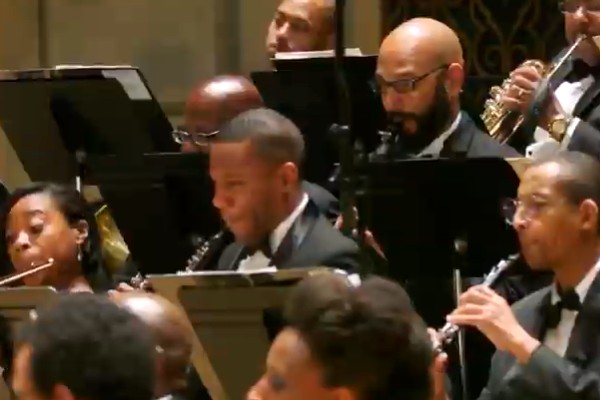 Led by Music Director Michael Morgan, the concert will showcase the world premiere of a new Gateways commission from 2021-22 “Perspectives” artist Jon Batiste, the Oscar-winning, Grammy-nominated music director of The Late Show with Stephen Colbert.

Batiste’s new work shares the program with Brahms’s Variations on a Theme by Haydn, Florence Price’s Third Symphony, and Sinfonia No. 3 by George Walker, the first African-American laureate of the Pulitzer Prize for Music, whose centennial falls next year.

The concert concludes with James V. Cockerham’s Fantasia on “Lift Every Voice and Sing,” a signature piece for the ensemble, whose distinguished members hail from the foremost orchestras and conservatory teaching faculties nationwide.

For professional classical musicians of African descent, the Gateways Music Festival represents a welcome haven from the isolation many faces in their working lives.

To give these musicians a supportive artistic home, the festival was founded in 1993 by eminent concert pianist and educator Armenta Adams (Hummings) Dumisani, whose string of honors includes Musical America’s Musician of the Year and the first Leeds International Piano Competition Special Prize.

Originally based in North Carolina, the festival relocated to Rochester, New York in 1995 when Dumisani was appointed to the faculty of the Eastman School of Music.

Since then, Gateways has formalized and strengthened its partnership with Eastman while remaining independent and steadily increasing in size and reach.

At recent festivals, the Gateways Music Festival Orchestra comprised 125 instrumentalists, many drawn from such major orchestras as the New York and Los Angeles Philharmonics, the Cleveland Orchestra, and the National, Boston, Houston, Phoenix, and Detroit symphonies.

Over the course of each six-day festival, the musicians give a full orchestral concert and participate in numerous chamber recitals, open rehearsals, professional development activities, lectures, panel discussions and film screenings at 50 venues in and around the city of Rochester.

This prodigious growth was achieved under the auspices of Lee Koonce, who has served as Gateways’ President & Artistic Director since Dumisani’s retirement in 2009.

Koonce’s long association with the nonprofit festival dates back much further, however, for it was he who instigated its celebrated three-week quartet residency with the Chicago Symphony Orchestra in 1997, when he served as that orchestra’s Director of Community Relations.

Now, almost a quarter-century later, he explains what Gateways’ historic Carnegie Hall debut means for the festival and the communities it serves:

“Gateways Music Festival’s journey to Carnegie Hall has been 28 years in the making. To be the first all-Black classical symphony orchestra to headline a performance there* is momentous, especially at this time of racial reckoning in our country’s history. Hearing and seeing the Gateways orchestra on Carnegie’s revered main stage will show Black children that they can perform classical music at the highest level, while reminding people of all backgrounds that this music belongs to everyone. We are grateful to Carnegie Hall for its belief in our mission and its commitment to showcasing the artistry of Black classical musicians. It’s a sign of hope and heralds a brighter future.”

“We are delighted to be presenting the Gateways Music Festival Orchestra this season in the ensemble’s Carnegie Hall debut. We have long been inspired by the festival’s commitment to extraordinary artistry as it celebrates the many contributions that musicians and composers of African descent continue to make to classical music. We look forward to introducing the Gateways musicians to our audiences as they embark upon their residency, connecting with music lovers throughout New York City.”

Earlier in his career, Morgan made his New York Philharmonic debut at Leonard Bernstein’s invitation and served under both Sir Georg Solti and Daniel Barenboim as Assistant Conductor of the Chicago Symphony, becoming the first Black titled conductor in its illustrious history. “Interested in community, in blending cultures, the power of diversity, and the intersection of music and well-being, imagination and hope,” Maestro Morgan is, as the San Francisco Classical Voice observes, “one of the most underrated conductors in America.”

“The Gateways artists look forward to connecting with audiences in New York City and bringing the music they love to communities in a way that is unique to our organization – personal, connected and engaged.”

Further details of the 2022 festival will be announced this fall.

* While Carnegie Hall has presented several all-Black ensembles over the course of its history, Gateways Music Festival Orchestra is the first known all-Black classical symphony orchestra to be featured at the venue.