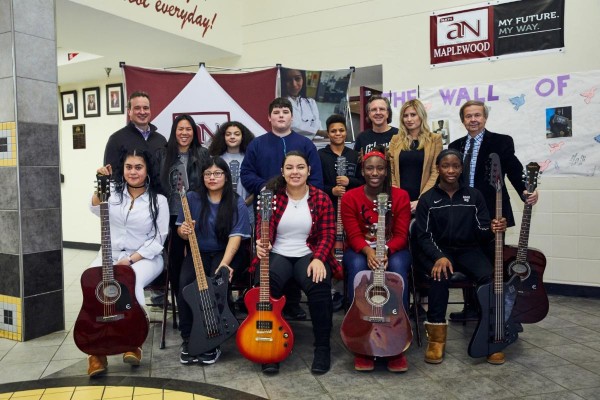 In July-2019, Gibson re-launched its philanthropic arm Gibson Gives–and upon its two-year anniversary.

Gibson Gives is proud to announce it has raised over $2.5 million dollars worldwide through its mission of creating, developing, and supporting non-profit organizations in their efforts to advance musicians, as well as youth-focused education and wellness initiatives.

Leveraging the success of Gibson Gives, the brand followed with KRK Kares, and has announced today the launch of Epiphone Empowered, Kramer Kares, and Mesa Mission.

Under the umbrella of Gibson Gives–a 501(c)(3) organization–the above programs will follow the same success path and bring awareness to the charitable spirit of all the brands of Gibson.

100% of all donations to and from Gibson Gives go towards giving the gift of music.

Gibson Gives has created two new groups which include an Influencers and an Artist Advisory Council to help drive the culture of giving back across Gibson’s brands, employees, artists, partners, events, and communities worldwide.

The Gibson Gives Influencers and Artist Advisory Council will provide thought leadership, foundation, and funding strategy, as well as present philanthropic opportunities they are passionate about that fulfill the foundation’s mission to amplify the reach, message, and awareness of all program initiatives and non-profit partners.

The Gibson Gives Influencers group is comprised of a community of leaders across the Music and Entertainment Business, Sports, Youth, Education, Legacy, International, the Nashville “Music City” Community and our partner advisors.

Gibson Gives recently announced the launch of TEMPO, Training and Empowering Musicians to Prevent Overdose–a collaborative program with MusiCares, Harbor Path and 7 non-profits–to save musicians’ lives in response to continued and elevated opioid overdoses from over a year of confinement and Covid 19 closures.

Watch the new TEMPO PSA with Forest Blakk to raise awareness in the musician community, Here and learn more about TEMPO, Here.

During the July-2019 re-launch of Gibson Gives, the foundation immediately committed to donating 1,000 guitars in 1000 days to non-profits including music education, music wellness programs and musicians in need worldwide and has climbed above and beyond that initial milestone by donating over 2800+ guitars in 700 days.

“When we announced we would donate 1000 guitars in 1000 days, I thought it was a lofty goal,” explains Dendy Jarrett, Executive Director of Gibson Gives. “We could have never predicted all the hurdles this past year presented in the music community and beyond. It’s been a humbling experience and an honor to work with so many worthy music and health programs in need, directly supporting and impacting individual people, as well as non-profits.”

Gibson Gives is committed to making the world a better place and helping those in need in the following ways:

Introduce, inspire, and amplify the power of music by working with major musician-oriented charities such as MusiCares, Keeping the Blues Alive, NIVA, NITO, Apollo Theater, the Save the Music Foundation, and more to help struggling musicians worldwide.

The Play It Forward program, established to move quickly and offer fast support to individual musicians, groups, as well as charitable organizations with immediate needs including the recent Nashville Tornado, Nashville bombing that displaced many creators. 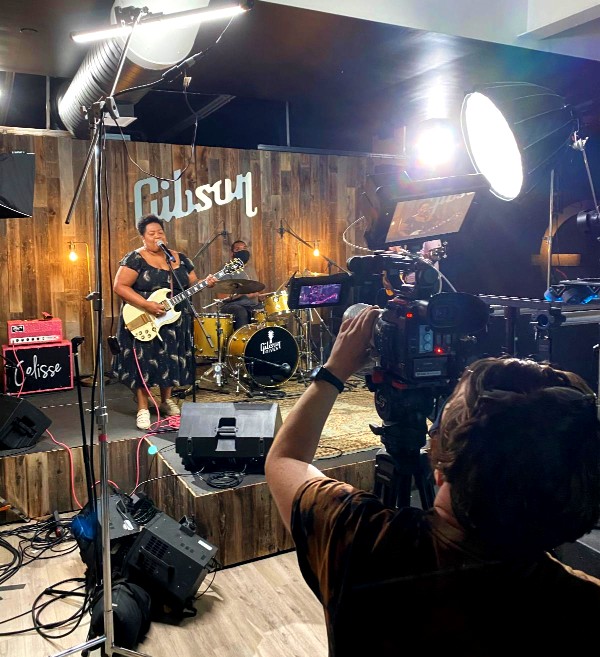 Gibson Gives and KRK Kares work extensively with other charities in a 360 degree way, raising the funds they need the most right now including MusiCares, The Recording Academy (GRAMMY’s), Guitars For Vets (helping U.S. military veterans with PTSD), Let’s Stay (In) Together Apollo Theater Benefit, Women Who Rock (raised over $45,000 in October for breast cancer research at Magee Women’s Research Institute) Ryan Seacrest Foundation (placed Gibson instruments and KRK studio gear in all of their U.S. hospitals for recovering children and offering them music-making lessons to cope with illness and PTSD), JoyRxMusic® Children’s Cancer Association (arranged music lessons for hospitalized kids and teens facing cancer and coping with serious illness) and the Do it for the Love’ Foundation (a wish-granting nonprofit organization for people living with life-threatening illnesses).

Gibson Gives partnered with the NAMM Foundation for their Believe In Music 2021 program–NAMM attendees both donated and selected the non-profit they wanted to receive their donation—raising $20,000 in three days.

As key music programs in schools continue to be cut in the U.S. and worldwide, Gibson Gives accelerated its expansion and global footprint this year.

The Covid 19 pandemic school closures made the need for access to music education and instruments even greater in our communities.

Gibson Gives will continue to supply schools with music learning resources and instruments including Manos Escuela de Guitarra in Aguascalientes, Mexico, in partnership with Sergio Vallin of Maná, Gibson sent 50 guitars to the school to support the teachers and students in Mexico.

Gibson Gives placed instruments in schools in South Africa and Armenia, and when the entire Kingdom of Tonga–170+ Polynesian islands in the South Pacific–was locked down to outsiders due to the pandemic, Gibson stepped in to provide guitars and ukuleles for a youth music-learning program at the local library.

Gibson Gives partnered with Universal Music Publishing Group in China to identify schools in need of music education assistance and partnered with the following programs and schools to gift guitars and music accessories including Playing For Change Foundation (placed 200 new acoustic guitars for their school programs in underserved communities across the globe), Notes for Notes, Life by Music, Samanlego School (Vitoria, Spain), Gallatin High School (Bozeman, MT), Maplewood High School (Nashville, TN), Give A Note, Music Heals Foundation (Vancouver, B.C.), and arranged music business workshops with the Save the Music Foundation for students to learn about jobs in the music industry.

Gibson Gives launched the Play it Forward program when Gibson helped local and national musicians in need by replacing guitars–regardless of the brand–lost in the devastating Nashville tornados of February 2020.

Play It Forward allows Gibson Gives to act fast for events like COVID 19, natural disasters, and those times Gibson learns of someone who is truly worthy of a gifted guitar.

On December 25, 2020, a bomb in an RV parked on in downtown Nashville destroyed residences and buildings.

Nationally known local musician and session player Buck McCoy was able to evacuate but lost most of his personal belongings in the blast including 12 guitars and his home studio equipment.

Gibson Gives’ Play It Forward was able to immediately replace Buck’s instruments (a Gibson Acoustic and a Gibson Les Paul electric guitar and KRK Kares provided him with a pair of ROKIT monitors and KRK headphones).

As a result, Buck was able to start working again on his weekly radio show.

Pietri’s vintage figurines and musical instruments are all “Proust’s madeleines” which are sublimated in glass boxes by the colors and the poetry of butterflies from all over the world (photos below).

Gibson Gives is planning more collaborations with Pietri and other visual artists this year.

Watch and share the interview with James “JC” Curleigh, President and CEO of Gibson Brands on the worldwide mission of Gibson Gives: Here.

Gibson Gives believes that getting instruments into the hands of those with a desire to make music is a truly life-changing event and investing in music education will yield better people, better leaders, and a better world for all.

For over 127 years, Gibson has been shaping sound across generations and genres through their guitars. Gibson, and its charitable arm Gibson Gives believe in the power of music, and that getting instruments into the hands of those with a desire to make music is a truly life-changing event.

Gibson Gives–a 501(c)(3) committed to introduce, inspire, and amplify the power of music through guitars–believes that now more than ever we must band together to support programs for music students.

Gibson Gives is committed to making the world a better place through music by creating, developing, supporting programs, and working with other non-profit organizations, in their efforts to advance youth-focused and healing music initiatives.

100% of all donations to and from Gibson Gives go towards giving the gift of music. In mid-2019, Gibson Gives committed to donating 1,000 guitars in 1000 days and exceeded that milestone, by donating over 2800+ guitars in 700 days.

Gibson, the leading iconic guitar brand, has shaped the sounds of generations of musicians and music lovers across genres for 127 years.

Founded in 1894 and headquartered in Nashville, Gibson Brands has a legacy of world-class craftsmanship, legendary music partnerships, and progressive product evolution that is unrivaled among musical instrument companies.

The Gibson Brands portfolio includes Gibson, the leading guitar brand, as well as many of the most beloved and recognizable music brands, including Epiphone, which has been on every stage since 1873, Kramer, the original MADE TO ROCK HARD guitar brand, MESA/Boogie, the home of tone, and KRK, behind great music for over 30 years.

Gibson Brands is dedicated to quality, innovation, and sound excellence so that music lovers for generations to come will continue to experience music shaped by Gibson Brands.