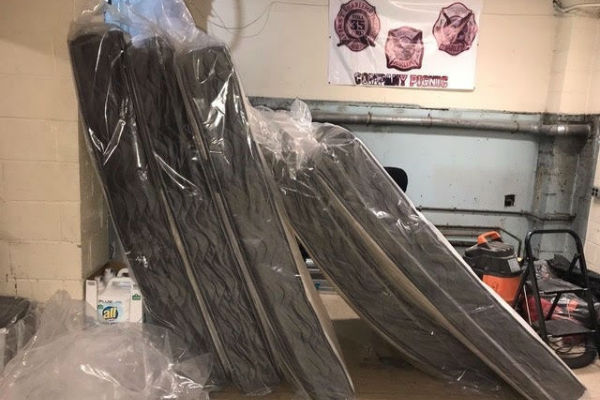 For months, even as they served on the front lines of the pandemic, the firefighters at an East Harlem firehouse have had to lounge between calls on a set of deteriorating mattresses.

On Monday, as the firehouse on Third Avenue underwent renovations, firefighter Robinson Aupont reached out to Harlem District Leader Keith Lilly to ask how they might go about replacing the aging mattresses.

Less than 24 hours later, the firemen were surprised by a special delivery: 15 new mattresses, courtesy of the Harlem-based Migdol Family Foundation.

“It’ll definitely help,” said Aupont, who asked that the specific firehouse not be named due to FDNY policies. “A bad mattress could give you a bad back.”

It won’t be the last time the firehouse and the foundation team up this week. On Thursday, the Migdol Foundation is co-hosting its 10th annual free Thanksgiving dinner, where more than 2,000 hot meals will be given out to Harlem residents in a grab-and-go distribution.

The giveaway at 1325 5th Ave., between 111th and 112th streets, will start at 12 p.m. and last until all the meals are gone. No advance registration is required.

City Councilmember Bill Perkins, the Sojourner Truth Democratic Club and Friends of Public School Harlem are also chipping in — and the firefighters from Engine 35 will help serve food.

Later this year, they plan to team up again for the firehouse’s annual holiday toy drive, whose donations come in large part from the Migdol Foundation.

Aupont said the partnership validates the firefighters’ work in the community, which encompasses much more than responding to emergency calls reports Patch.

“We don’t just go and put out fires — we definitely do care about the neighborhood,” he said.