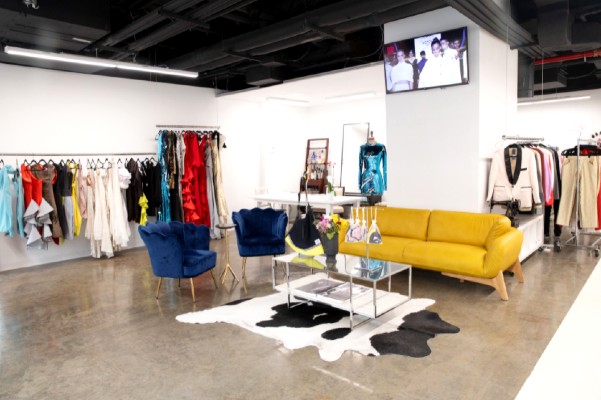 Amid a raging global pandemic and national sociopolitical unrest, D’Angelo received advice like “wait this out,” “it’s the wrong time to open a brick-and-mortar business,” or “people are not ready to open their wallets yet.” Thankfully, ever the bold optimist, D’Angelo is committed to offering the return of hope, unity, kindness, community, and buzz to Harlem and beyond.

The interior design is inspired by an industrial-style open concept studio. Complete with an in-house sample room, a 40-ft runway, and a cocktail bar, the @EdwingDAngelo Atelier is a fully immersive fashion experience for our clients.

Why now and why Harlem? Just after 9/11, D’Angelo opened his first boutique on 125th Street, hidden under a train station escalator that obscured his window displays. “I learned a key lesson—the importance of location, location, location,” says D’Angelo. “Yet, I continued to bet on NYC at a time when people were scared, and many had fled the city and its uncertain future.” He banked on the city’s resilience. Fast-forward to 2020 and COVID-19, and New York was once again grappling with uncertainty. As a true New Yorker, he put all his chips on Gotham City.

Prior to the pandemic, D’Angelo felt challenged by the new reality of the fashion industry, dreading he would have to change from a custom-made business model to an online business. He felt that he was being left behind due to his lack of a robust online presence. But the COVID-19 crisis gave him a new sense of purpose. So, he jumped back in the game, bringing that new energy to Harlem. “This is my home, the community that adopted me 20+ years ago. This is where most of my creative vision and concepts come from,” D’Angelo explains.

D’Angelo finds Harlem’s boulevards to be filled with fashion, vibrancy, and enthusiasm. On the same block one can spy a businessman in a three-piece suit, an African Muslim woman in an all-black burka, and a group of twenty-something-year-old guys showing off denim swag.

D’Angelo also admires the architecture of Harlem’s historic buildings, including the amazing cathedrals where yesterday and today meet. He sees the area as a powerful canvas that speaks to his sensibilities of fusion, formed earlier on by the cultural richness of his native Colombia.

Community means a lot to him, which is why he plans to use his open-concept studio to create an innovative immersive experience through the lens of fashion. While shoppers will have the opportunity to see D’Angelo and his creative team in action, he also intends to invite guest designers from the community and trailblazing artists to showcase their work at the Atelier.

Edwing D’Angelo is a Colombian-born New York fashion designer. His designs have been featured on a variety of national television networks and programs, including CNN, MTV, NBC’s The Today Show, ABC’s Good Morning America, CBS’s Morning News, the Associated Press and MSNBC.