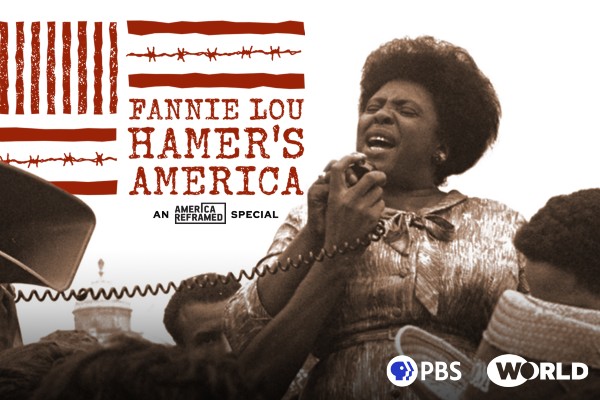 Fannie Lou Hamer’s words are a rallying cry for today’s generation, emblazoned upon placards at rallies across the country:

But was one of the most prominent voices of the civil rights era talking about the America of the ’60s or that of today? Hamer was bloodied (and disabled) in the fight for voting rights.

The daughter of Mississippi sharecroppers called out police brutality and economic inequality in America on the national stage.

But today we find ourselves again in a desperate, violent battle for the franchise, a humane criminal justice system, and for fair wages.

Now the story of one of the most powerful figures of the movement — despite a U.S. president, the media, and some of her fellow civil rights leaders trying to silence her — is coming to public television.

Fannie Lou Hamer’s America will have its world premiere on PBS and WORLD Channel on February 22, and 24, 2022 during Black History Month respectively as part of WORLD Channel and American Documentary, Inc.’s series America Reframed, kicking off the series’ 10th season.

Directed by Joy Davenport, the film — real history and inspiration for today’s activists and a new generation — is originated by Hamer’s family, particularly her great-niece Monica Land, and tells Hamer’s story in her own words with some never-before-seen photos and rare footage the family and film researchers uncovered.

Check the not to be missed documentary below: