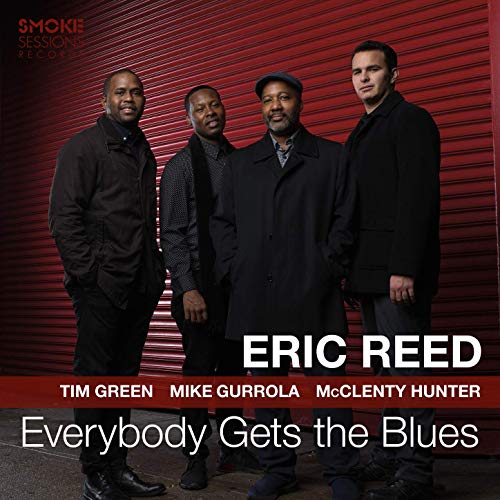 Everybody Gets the Blues is jazz pianist Eric Reed‘s strongest statement yet in a lifelong mission to revitalize the gospel roots of jazz. Joined by a thrilling quartet with Tim Green, Mike Gurolla, and McClenty Hunter, Reed finds inspiration and some unexpected connections in the music of Cedar Walton, Stevie Wonder, The Beatles, John Coltrane, Freddie Hubbard while rediscovering the gospel lifeblood that fuels his jazz passion.

Eric Reed, a commanding presence on the jazz scene since at least 1990, when he was hired to the piano post in Wynton Marsalis’ band, has always hinted at a deep vein of spirituality in his music, variously expressed in individual pieces as well as in his nods and tributes to Coltrane, Monk and others.” – Phillip Booth, JazzTimes

For the grandson of AME preachers, it was the sound of the gospel that Reed first heard and first played, and that was at the core of his earliest love of jazz. “When I first started playing jazz as a child, my fascination with the music of Horace Silver, Ramsey Lewis, or Dave Brubeck resonated with what I heard growing up in church, listening to piano players like James Cleveland and Herbert Picard and Curtis Dublin. I said, ‘Wait a minute, this doesn’t sound like the stuff I play in church, but it’s very closely connected. What’s going on here?’”

“Mr. Reed has a precise interface with the piano, and roughly the same inclinations as both an improviser and a bandleader: He favors syncopation and poise, spontaneity and control.” – Nate Chinen, The New York Times

“For too many years I ignored my own instincts,” the pianist says. “I started out playing different kinds of music with all different kinds of people, but I took a detour. This record is a turning point; it’s finally time to start doing what it is that I want to do.”

Through a range of moods and styles, Eric Reed recognizes that Everybody Gets the Blues, offering a spirited act of communion for those wanting to commiserate and a vigorous set of swing for those who’ve come out the other side.