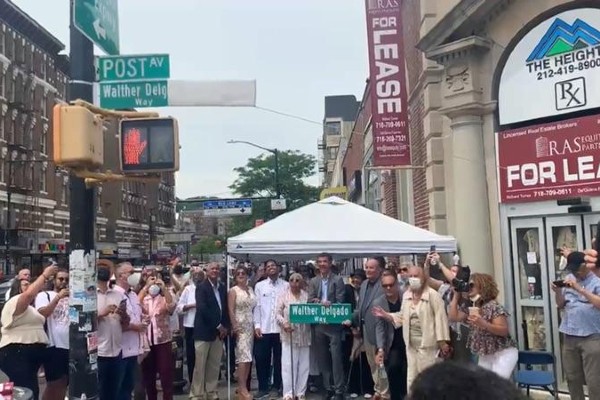 Manhattan Community Board 12 Chairman Eleazar Bueno, and community residents held a street co-naming ceremony to honor the life and legacy of Walther Delgado.

Walther Delgado was born on September 15, 1955. At the age of 11, he made his way from the Dominican Republic to Washington Heights, New York City.

Growing up in the Heights, it was hard for him to believe that a neighborhood that held so much promise and pride was equally plagued with so much inequality and lack of access to basic resources like education, housing, and economic development.

He made it his life mission to fill the gap through community actions by leading from the front and engaging Washington Heights’ best resource: its people.

He was on the steering committee that founded Alianza Dominicana and The Audubon Partnership. If not for his contribution, Alianza Dominicana would not have been the change agent it was for the community in the 1990s and to this day. It offered the first drug treatment program in the neighborhood, access to immigration lawyers, and so much more. The majority of his efforts, however, were spent on launching The Audubon Partnership based in Inwood. It allowed residents of Washington Heights and Inwood access to development services through lending and business advocacy classes.

Walther’s goal was to teach Uptown how to help themselves so that black and brown immigrants could create a fruitful, sustainable, and equitable livelihood. In 1998, the federally financed Upper Manhattan Empowerment Zone provided his organization with a $750,000 revolving loan to fund commercial development in the CB12 neighborhood. This action birthed many of the small local businesses we hold near and dear to the heart of our neighborhood today.

From 1998 to 2002, he served on Community Board 12 as a board member and eventually, as its Chairman. In 2003, Walther led the charge to create what we now know to be Sherman Creek – urging the city to provide a waterfront view to uptown residents.

He wanted the beauty and spirit of the neighborhood to be captured physically too. He dedicated his life to public service in Washington Heights and Inwood up until his death in 2013. Though he is no longer here, his legacy lives on in the lives and the community he’s helped change.

“Walther Delgado dedicated his life to fighting for the most vulnerable New Yorkers in his community. It is important that we acknowledge the contribution made by advocates and activists within our communities,” said Council Member Ydanis Rodriguez. “Walther exemplified the best of our community and he is missed everyday by his friends and family. I am proud to be standing alongside Congress Member Adriano Espaillat, Assembly Member Carmen de la Rosa, Manhattan Borough President Gale Brewer, and Community Board 12 today as we co-name the corner of 207th street and Post Avenue, Walther Delgado Way.”

“Walther Delgado was a mentor, a friend, and a champion throughout Washington Heights and to Dominicans throughout New York City,” said U.S. Congressman Adriano Espaillat (NY-13). “Walther and I served on Community Board 12 together during period when our neighborhood faced great challenges. He taught us how to develop our communities to help ourselves and our families thrive while proving that immigrants could create a sustainable and equitable livelihood while contributing fully to the success of our local neighborhoods and achieving the American dream. I am proud to stand with Councilmember Rodriguez, friends, family and community leaders today to honor the life and legacy of Walther Delgado and recognize the influence he had on each of us.”

“Walther Delgado Way is a symbol of compassion, activism, and progress for the diaspora in Northern Manhattan. Mr. Delgado devoted his life to serve the less privileged and disadvantaged in hopes to advance our communities forward to the path to empowerment, leadership, and engagement. Today we honor his legacy and make his inedible mark a perpetual one through this co-naming” said Assembly Member Carmen De La Rosa.

“Walther Delgado dedicated his life to Inwood and Washington Heights and his legacy can still be seen and felt today,” said Manhattan Borough President Gale A. Brewer. “From helping to found Alianza Dominicana, and the Audubon Partnership, to his service on Community Board 12, his exemplary service will be forever recognized through the co-naming of Post Avenue and 207th Street. I commend Council Member Ydanis Rodriguez for spearheading the effort to establish Walther Delgado Way.”

Ashley Fernandez, Assistant Chair, Business Development Committee, Manhattan Community Board 12, said, “Decades later, the seeds Walther Delgado planted; the founding of Alianza Dominicana and Audobon Partnership, chairing Community Board 12, and leading Urban Economic Development under Mayor Dinkins, Mayor Giuliani, and Mayor Bloomberg, are still in full bloom today. His legacy serves as a reminder that though we may not see the full fruition of our efforts in our lifetime, we have the power to create lasting change, just by trying. He will be forever remembered as a man of distinction, not because of his awards and accolades, but because of his commitment to the beauty and success of Washington Heights and Inwood.”

I am proud to be standing alongside @RepEspaillat, @CnDelarosa, @galeabrewer, Community Board 12, friend and family of Walther Delgado today as we co-name the corner of 207th street and Post Avenue, Walther Delgado Way! pic.twitter.com/l8QER1qVOB

Dr. Rafael A. Lantigua, Professor of Medicine Columbia University Medical Center, said, “I join Councilman Rodriguez on celebrating the life and legacy of Walter Delgado, a leader, advocate, planner and pioneer of the Dominican Diaspora in New York City; his vision as an organizer, team player was unique as he worked to position the Dominican Community as a real competitor in achieving political equity in our neighborhood; Walter was a person who pride on his Dominican ancestry; we miss his acumen and devotion to improve the quality of life of all of us.”