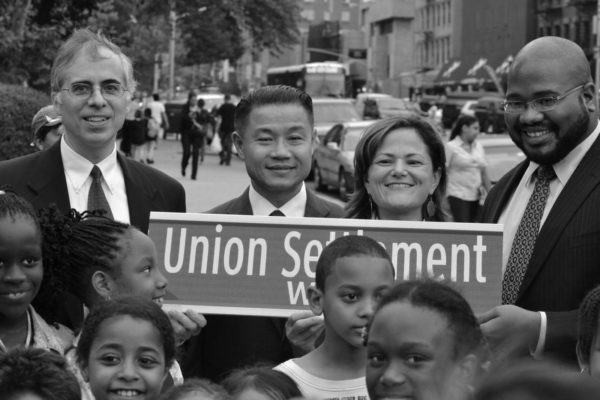 Announced today that it is suing the New York City Department of Education (DOE) to reverse a flawed contract award process that is having a severe adverse impact on young children in East Harlem, as well as their parents and the small businesses that provide early childhood services.

This included proposals for organizations to operate Family Child Care Networks (FCCNs), which are networks of individuals and small businesses providing child care services in their homes.

Union Settlement has overseen an FCCN for decades, and offered to continue operating that program, overseeing a network of providers serving children ages six weeks old to four years old, from 8 a.m. to 6 p.m. every weekday, 12 months per year (referred to as “extended day/year” services).

Contrary to the terms of the RFP, DOE instead awarded Union Settlement a contract to serve only 3-year-olds, only until 2:30 p.m. each day, and only during the school year (referred to as “school day/year” services).

This violation of the RFP process harms children, families and providers in six different ways:

The process that DOE used to make the FCCN awards violated the clear language of the rules set forth in the RFP, and Union Settlement has made multiple efforts over the past year to resolve this matter, including proposing resolutions that would eliminate all of the harms noted above, without imposing any additional costs on DOE.

Those efforts were unsuccessful, and Union Settlement has now been forced to sue DOE to prevent these harms from occurring.

“I simply do not understand why DOE wants to force litigation in this matter, where the flaws in the decision-making process are so clear, and there is an easy resolution that benefits the children, families, and caregivers, and that costs DOE nothing,” said David Nocenti, Executive Director of Union Settlement.  “I hope that Chancellor Meisha Porter, who was not involved in the original decisions, will take a hard look at this and decide to take action to benefit the children, families and small businesses here in East Harlem.”

“Our goal is to prepare community members to establish and run their own home-based child care businesses which provide a safe and caring learning environment for children,” said Denise Ramos, Union Settlement’s Interim Director of Early Childhood Education. “My heart goes out to the providers, parents, and children who are caught in the middle of this unfair situation that can be easily remedied without cost to DOE.”

“I only have one child enrolled in my program and I usually have six to seven kids.  I am struggling to pay my monthly rent of $3,800, and I was recently served a court order due to my inability to pay because my income is reduced,” said Maria Martinez, a Family Child Care Network provider. “I have successfully operated my child care business for 16 years which allowed me to provide for myself and my sons.  If the DOE does not change the award so I’m able to enroll more children, I will be forced to close my child care business.”

“I am worried about losing my job in retail because I am only able to work limited hours because I don’t have anyone to care for my son after 2:30pm,” said Wendy Diaz, an East Harlem parent.  “As a single mom, I can’t afford to pay the provider out-of-pocket and don’t have anyone else to take care of my son in the afternoons or during the summer when no care is available.”

“DOE’s failure to amend the award is adversely impacting East Harlem, one of the poorest neighborhoods in New York, as it tries to overcome the longstanding health and economic disparities it has always faced, and that have been exacerbated by the COVID-19 pandemic,” said Mr. Nocenti. “Amending the award will benefit East Harlem children and parents, because this community needs extended-day, extended-year care for children of all ages, and also will benefit the FCCN providers, who need to stay solvent and feed their own families.”

Union Settlement is an on-the-ground resource for East Harlem residents of all ages, and a passionate advocate for the needs of underserved communities.