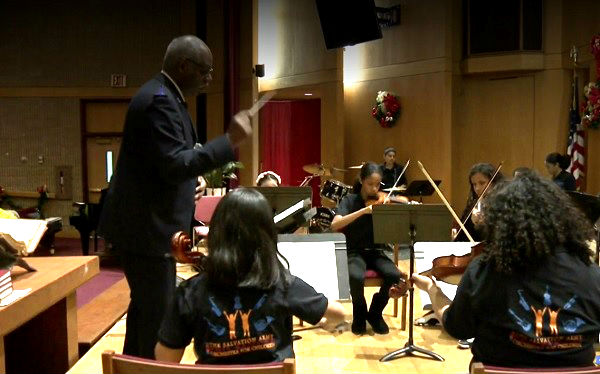 A nearly decade-old program providing the gift of music to underprivileged children in Harlem may be nearing its end.

They’re asking for help to survive.

Eleven-year-old CJ Watch has become quite the accomplished cornet player. His skills are fine-tuned after four years with the Phil Ramone Children’s Orchestra, founded by and named after the late legendary music producer.

“To be in here, it’s special for me because I get to play with other friends,” CJ told CBS2’s Hazel Sanchez.

The program, once run by the Salvation Army of Greater New York, is in danger of folding.

One year ago, CBS2 reported on its financial struggle and helped bring in funding to keep it afloat. The program provides free instrument rentals and lessons for underprivileged children, but now the Salvation Army has ended its financial support of the orchestra.

“To think of it going under would be horrible,” orchestra director Ken Burton said.

Burton worries a possible future in music for many children may be over.

“It would be disappointing because it would be like something that was taken away from me that I love,” 9-year-old Sophia Goya said.

“I’m not gonna cry because my wife told me not to cry,” Burton said.

The Salvation Army initially invested $1 million to get the orchestra started nine years ago.

Now, because of budget constraints and fewer people donating money to the program, a spokesperson says it had to cut ties.

Burton and several of the orchestra’s supporters, including Phil Ramone’s brother-in-law, are trying to run the program on their own as a nonprofit.

To learn more about the program and how you can make a donation, visit ramoneorchestra.org.