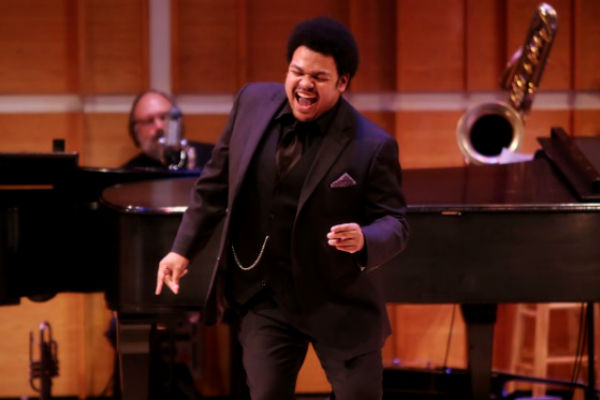 “In mid-century America, Harlem was home to a thriving subculture of gay singers and composers. Some of what they wrote was sexually explicit, but much of it was written to pass undetected into straight culture. To bring this repertoire to life, I am very happy to have reassembled the brilliant group of singers and players who made last year’s W. C. Handy concert so unforgettable. They turn every song into a rocket, and they’ll have a wide variety of rockets to launch: double-entendre numbers, gorgeous ballads, even a couple of spirituals arranged by the great Hall Johnson. I’m happy to say that my duo-piano partner Joseph Li is coming back to New York to turn the 88s into 176s, and I am preparing for a magic carpet.”

New York Festival of Song (NYFS)—the long-running “engaging, ever-curious series” (The New York Times)—premieres a fascinating new show called Tain’t Nobody’s Business If I Do: Songs from Gay Harlem, revealing the musical heart of a subculture within a subculture.

NYFOS will also introduce songs by Gladys Bentley, the most popular gay entertainer in 1920s Harlem. She is featured in this New York Times series about prominent people whose deaths were not reported by the newspaper, and there is a large banner with her photo on 125th Street, along with the ones of Langston Hughes, Alain Locke, and Claude McKay. Bentley’s songs have not been performed in 90 years and existed only as records until November 2019, when they were rediscovered by the early blues scholar Elliott Hurwitt (who provided programming assistance for this event).

NYFOS brings back the superb cast of last season’s hit production W.C. Handy and the Birth of the Blues (with the exception of Shereen Pimentel, the NYFOS and Blier protégé who was cast as Maria in Broadway’s upcoming revival of West Side Story

After the W.C. Handy concert, Opera News hailed Blier’s piano playing as “simultaneously clean and dirty”; praised the “utterly endearing” Justin Austin and his “honeyed baritone”; noted the “salty and sultry” Lucia Bradford, who “kept all her numbers fresh and real, allowing her rich, chocolaty voice to discover the hot moments”; and raved about “Joshua Blue, whose saints-raising tenor and complete embodiment of his songs were revelatory.”

Cadenza.nyc noted the “performers’ instant rapport with the audience” which “made for an evening that was stimulating and educational, but moreover, emotionally touching.” The same excitement and Blier’s knowledgeable wit will carry the audience through these stories of Harlem’s gay underground.

Now in its 32nd season, New York Festival of Song (NYFOS) is dedicated to creating intimate song concerts of great beauty and originality. Weaving music, poetry, history and humor into evenings of compelling theater, NYFOS fosters community among artists and audiences. Each program entertains and educates in equal measure.

Founded by pianists Michael Barrett and Steven Blier in 1988, NYFOS continues to produce its series of thematic song programs, drawing together rarely-heard songs of all kinds, overriding traditional distinctions between musical genres, exploring the character and language of other cultures, and the personal voices of song composers and lyricists.

Since its founding, NYFOS has particularly celebrated American song. Among the many highlights is the double bill of one-act comic operas, Bastianello and Lucrezia, by John Musto and William Bolcom, both with libretti by Mark Campbell, commissioned and premiered by NYFOS in 2008 and recorded on Bridge Records. In addition to Bastianello and Lucrezia and the 2008 Bridge Records release of Spanish Love Songs

with Joseph Kaiser and the late Lorraine Hunt Lieberson, NYFOS has produced five recordings on the Koch label, including a Grammy Award-winning disc of Bernstein’s Arias and Barcarolles, and the Grammy-nominated recording of Ned Rorem’s Evidence of Things Not Seen (also a NYFOS commission) on New World Records. In 2014, Canción Amorosa, a CD of Spanish song—Basque, Catalan, Castilian, and Sephardic—was released on the GPR label, with soprano Corinne Winters accompanied by Steven Blier.

NYFOS is passionate about nurturing the artistry and careers of young singers, and has developed training residencies around the country, including with The Juilliard School’s Ellen and James S. Marcus Institute for Vocal Arts (now in its 15th year); Caramoor Center for Music and the Arts (its 12th year); San Francisco Opera Center (over 21 years); Glimmerglass Opera (2008–2010); and its newest project, NYFOS@North Fork in Orient, NY.

NYFOS’s concert series, touring programs, radio broadcasts, recordings, and educational activities continue to spark new interest in the creative possibilities of the song program and have inspired the creation of thematic vocal series around the world.