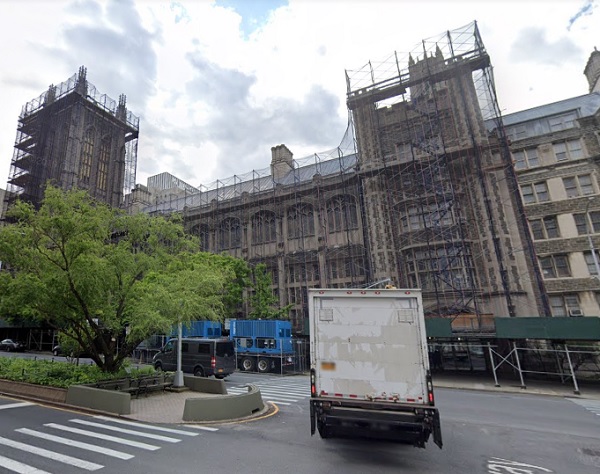 Demolition appears complete at 3041 Broadway in Morningside Heights in Harlem, the site of a forthcoming 42-story tower from Robert A. M. Stern Architects. Alternately addressed as 100 Claremont Avenue, the 350,000-square-foot project is being developed by L&M Development Partners and Lendlease with SLCE Architects as the architect of record and will yield condominiums marketed by Lendlease and L+M, as well as institutional offices, faculty housing, and classrooms for the Union Theological Seminary. The partial demolition process began last October and uses purchased air rights from the seminary.

Photographs from Tectonic show the plot where the edifice will eventually rise. Large blue waterproof membrane sheets cover the walls of the abutting historic structure. The rest of the sidewalk is surrounded by construction barriers and green wooden boards.

Some portions of the Union Theological Seminary’s eastern elevation facing Broadway have scaffolding and black netting covering the old windows and ornamental exterior elements. More curbside fences and barriers line this side of the complex.

The site is located just off of Broadway between West 120th Street and West 122nd Street, and is across the street from Riverside Church. Part of the building’s footprint extends into the landscaped courtyard, but will not result in a drastic reduction of the existing green space. 3041 Broadway incorporates a design typical of Robert A.M. Stern that is reminiscent of classic pre-war New York-style reports NY Yimby.

The upper levels of the structure will feature several setbacks topped with private outdoor terraces and a crown with a flat roof parapet. The curtain wall is lined with an even grid of windows and it appears that the building will be clad in RAMSA’s signature light-colored limestone.