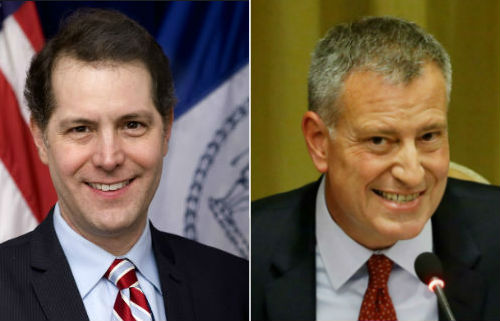 Today, the de Blasio administration filed a lawsuit against Ballyhoo Media, Inc. for repeatedly violating local laws by displaying Times Square-style billboards on a barge that travels daily along the Manhattan and Brooklyn waterfronts. The lawsuit seeks an injunction to prohibit the company from operating the billboards which, according to the complaint, violate the New York City Zoning Resolution and create a public nuisance. Ballyhoo markets its ability to reach drivers on the West Side Highway and FDR Drive as well as pedestrians, cyclists, ferry passengers, and residents along the water. The lawsuit seeks penalties of up to $25,000 per violation, per day for the company’s repeated and ongoing violations.

“Our waterways aren’t Times Square. These floating eye-sores have no place on them,” said Mayor de Blasio. “Ballyhoo is operating in direct violation of the law, and we are filing this suit to put a stop to it.”

“As detailed in our complaint, Ballyhoo continues to operate its water-based ads in defiance of local laws intended to further traffic safety and promote the various uses of waterfront areas for the public,” said Corporation Counsel Zachary W. Carter. “Ballyhoo openly promotes its large, water-based, LED billboards as specifically designed to attract the attention of drivers, necessarily posing a serious safety hazard on busy waterfront highways. We have asked the Court to impose civil penalties upon Ballyhoo and to order the company to abate its violations in the best interest and safety of the public.”

“New York City’s waterways are among our most precious public resources. Decades ago, planners had the foresight to write zoning regulations to prevent advertising on our rivers and harbor, protecting their natural beauty. Just because technology makes these ads more visible, doesn’t make them legal,” said Department of City Planning Director Marisa Lago. 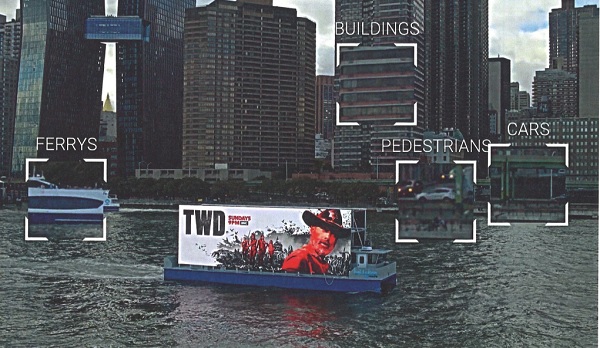 The Zoning Resolution prohibits the operation of advertising signage in waterways adjacent to any of the three major types of zoning districts in the City – residential, commercial, and manufacturing – and within view of any major highway or bridge. According to the company, the boat’s standard route begins on the Hudson River in midtown, heads southbound around Battery Park, and continues up the East River to Roosevelt Island.

Ballyhoo failed to cease its unlawful operations, despite notification from the Law Department. The case is filed in the U.S. District Court for the Southern District of New York and is being handled by Senior Counsel Brian Horan of the Law Department’s Affirmative Litigation Division under the supervision of Division Chief Gail Rubin.

“LED billboards belong in Times Square— not our waterfronts. Thank you to Mayor de Blasio for taking a stand against these eyesores on behalf of New Yorkers. We spend enough time staring at screens as it is,” said Senator Brad Hoylman.

“Let’s enforce the law and keep New York Harbor beautiful. Our historic world landmark harbor is not the place for commercial signage. I support the effort by New York City to remove these harmful signs from our shores,” said Assistant Speaker Felix W. Ortiz.

“Ballyhoo’s flagrant disregard for the law prohibiting waterway advertisements is incredibly unsafe for everyone who travels on, or by the water. I commend the Mayor for taking the necessary steps to protect our communities on New York City’s waterfront,” said Assembly Member Harvey Epstein.

“Times Square-style advertising billboards have no place on our treasured Manhattan and Brooklyn waterways, which have brought people and goods to our shores for generations. I’m glad that the city is taking action to ensure traffic safety and protect the recreational, cultural, and educational purposes of our waterways,” said Assembly Member Jo Anne Simon.

“If these guys won’t stop breaking the law by flaunting these obnoxious floating billboards in our harbor, they deserve to be sued and I applaud the Mayor for taking action. These monstrosities are ugly and illegal and soon they will be a thing of the past. At a time when every square inch of our world feels like it’s covered in advertisements, visual pollution is a real thing and our waterways should be off limits. Drivers along the water don’t need more distractions and when kids in Bay Ridge go to Shore Road Park, they don’t need to be barraged by flashing lights advertising the latest video game,” said Council Member Justin Brannan.

“These barges are more than just an obnoxious eyesore, they are a danger to drivers on the City’s arterial highways. Ballyhoo is in clear violation of City Law. This lawsuit is a good first step towards making sure ad companies like Ballyhoo can’t continue polluting the sanctity of our public spaces waterways.”

“These barges are more than just an obnoxious eyesore, they are a danger to drivers on the City’s arterial highways. Ballyhoo is in clear violation of City Law. This lawsuit is a good first step towards making sure ad companies like Ballyhoo can’t continue polluting the sanctity of our public spaces waterways.”

“Nobody wants to be walking along New York Harbor or the Rockaways only to be confronted by a 1,200 square foot TV screen running commercials on loop,” said Harlem Council Member Mark Levine. “These barges are more than just an obnoxious eyesore, they are a danger to drivers on the City’s arterial highways. Ballyhoo is in clear violation of City Law. This lawsuit is a good first step towards making sure ad companies like Ballyhoo can’t continue polluting the sanctity of our public spaces waterways.”

“We cannot allow companies like Ballyhoo to wantonly, and illegally, pollute our waterways with massive eyesores,” said Council Member Margaret S. Chin. “Over the past several months, numerous Downtown Manhattan residents called my office to alert me to the various bright and disruptive advertisements they saw on the Hudson River. I fully support the Mayor’s lawsuit against Ballyhoo. My Council colleagues and I will be complimenting City Hall’s action through the introduction of a bill increasing the fine on companies that illegally advertise on our city’s waterways from $25,000 to $100,000.”

“Thank you to the de Blasio administration for taking strong action against Ballyhoo Media, which has repeatedly violated our laws, and perhaps even more important, inappropriately commercialized our waterways. New York City’s 500-plus miles of coastline and waterways are a vital part of our shared public space—providing residents and tourists alike with year-round beauty, and an opportunity to relax and interact with nature. Floating ads have no place in our great rivers and harbor,” said Council Member Helen Rosenthal.

“New York City’s waterways are not Times Square so they should not be treated as such,” said Council Member Ben Kallos. “For good reason, we have laws on the books to protect our waterways establishing traffic and safety rules to promote public uses like recreation, transportation, and educational purposes, not shameless advertising. I stand with Mayor de Blasio in working to get these boats with neon advertisements out of our waterways.”

More information on the filing can be found here.