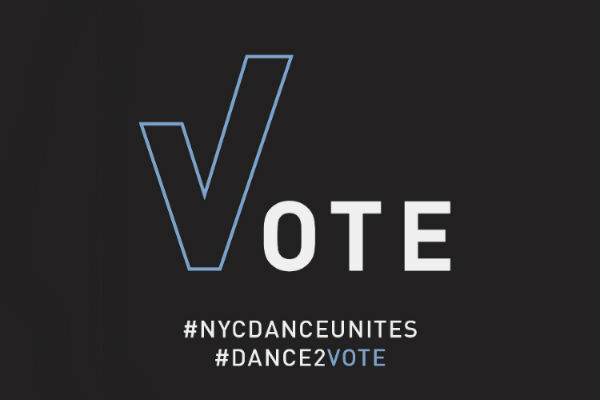 Five of New York City‘s acclaimed dance companies have joined together to create a new online initiative to urge the dance community to do their civic duty and vote: #NYCDANCEUNITES.

Launched on Friday, October 2, 2020, on each company’s social media platforms and website, the campaign is an on-going social advocacy initiative, inviting all dance artists and companies in NYC to participate. Led by Alvin Ailey American Dance Theater, American Ballet Theatre, Ballet Hispánico, Dance Theatre of Harlem, and New York City Ballet, the voices of each organization’s artists, staff, and communities will be heard.

The first iteration of #NYCDANCEUNITES focuses on voter turnout, encouraging dancers, dance makers, dance companies, dance advocates and dance supporters to make their voices heard both online and in real life, by encouraging others to vote throughout the month of October and by voting themselves in November.

The companies ask all presenting organizations, dancers and lovers of dance in NYC to elevate and participate in #NYCDANCEUNITES by cross-posting, sharing, and engaging in discourse across all platforms. Materials are available on Dance/NYC’s website here.

#NYCDANCEUNITES for the power of art to make a difference. In the challenge of this moment, we unite. Unable to make our art, be in our spaces, or connect with our community in person, we come together online to magnify our voices. VOTE. This election is for all of our futures.

Join us. Use the hashtag, create a video, raise your voice. VOTE!

In the future, #NYCDANCEUNITES will activate the NYC dance community around additional campaigns: a variety of social justice issues, access to dance education, and opportunities for the dance field in a changing world.

Alvin Ailey American Dance Theater, recognized by U.S. Congressional resolution as a vital American “Cultural Ambassador to the World,” grew from a now-fabled March 1958 performance in New York that changed forever the perception of American dance. Founded by Alvin Ailey, posthumous recipient of the Presidential Medal of Freedom – the nation’s highest civilian honor, and guided by Judith Jamison beginning in 1989, the Company is now led by Robert Battle, whom Judith Jamison chose to succeed her on July 1, 2011.

Alvin Ailey American Dance Theater has performed for an estimated 25 million people in 71 countries on six continents, promoting the uniqueness of the African-American cultural experience and the preservation and enrichment of the American modern dance tradition. In addition to being the Principal Dance Company of New York City Center, where its performances have become a year-end tradition, the Ailey company performs annually at the John F. Kennedy Center for the Performing Arts in Washington, DC, the Auditorium Theatre in Chicago, The Fox Theatre in Atlanta, Zellerbach Hall in Berkeley, CA and at the New Jersey Performing Arts Center in Newark (where it is the Principal Resident Affiliate), and appears frequently in other major theaters throughout the world during extensive yearly tours.

The Ailey organization also includes Ailey II (1974), a second performing company of emerging young dancers and innovative choreographers; The Ailey School (1969), one of the most extensive dance training programs in the world; Ailey Arts in Education & Community Programs, which brings dance into the classrooms, communities and lives of people of all ages; and The Ailey Extension (2005), a program offering dance and fitness classes to the general public, which began with the opening of Ailey’s permanent home-the largest building dedicated to dance in New York City, the dance capital of the world -named The Joan Weill Center for Dance, at 55th Street at 9th Avenue in New York City. For more information, visit www.alvinailey.org.

American Ballet Theatre is one of the great dance companies in the world. Few ballet companies equal ABT for its combination of size, scope and outreach. Recognized as a living national treasure since its founding in 1940, ABT annually tours the United States, performing for more than 300,000 people, and is the only major cultural institution to do so. 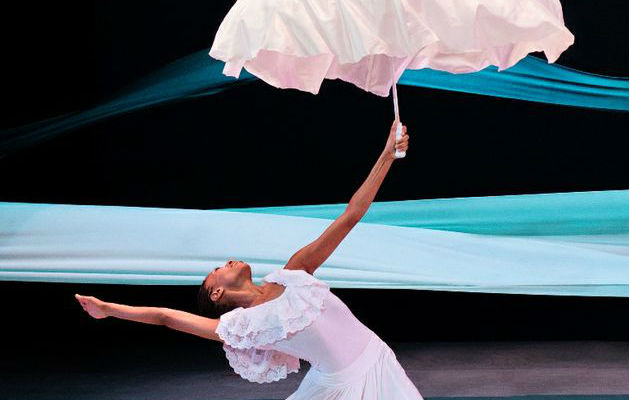 For 80 years, the Company has appeared in a total of 132 cities in 45 countries and has performed in all 50 states of the United States. ABT has recently enjoyed triumphant successes with engagements in Paris, Abu Dhabi, Singapore, Hong Kong and Oman. On April 27, 2006, by an act of Congress, American Ballet Theatre became America’s National Ballet Company®.

Ballet Hispánico, America’s leading Latino dance organization, has been an oasis of diversity and inclusion for 50 years.

Over the past five decades, Ballet Hispánico’s mission-driven ethos has been a catalyst of change for communities throughout our nation. By bringing the richness of the Latinx culture to the forefront of performance, education, and social advocacy, Ballet Hispánico is one of America’s Cultural Treasures.

The organization’s founder, National Medal of Arts recipient Tina Ramirez, sought to give voice to the Hispanic experience and break through stereotypes. Today, Ballet Hispánico is led by Eduardo Vilaro, an acclaimed choreographer and former member of the Company whose artistic vision responds to the need for social equity, cultural identity, and quality arts education for all.

Ballet Hispánico has been, and will continue to be, a beacon for diversity. The art we create explores and celebrates the culture without the trappings of stereotypes. We foster the pursuit of art as a way of providing transformation through the exploration of the human condition. Our art often defies gravity, acting as a frontline against cultural division by releasing preconceived notions of culture and instead offering our audiences new perspectives.

Dance Theatre of Harlem is a leading dance institution of unparalleled global acclaim, encompassing a professional touring company, a leading arts education center and Dancing Through Barriers®, a national and international education and community outreach program. Each component of Dance Theatre of Harlem carries a solid commitment towards enriching the lives of young people and adults around the world through the arts.

Founded in 1969 by Arthur Mitchell and Karel Shook, Dance Theatre of Harlem was considered “one of ballet’s most exciting undertakings” (The New York Times, 1971). Shortly after the assassination of The Reverend Dr. Martin Luther King, Jr., Mitchell was inspired to start a school that would offer children – especially those in Harlem, the community in which he was born – the opportunity to learn about dance and the allied arts. Now in its fifth decade, Dance Theatre of Harlem has grown into a multi-cultural dance institution with an extraordinary legacy of providing opportunities for creative expression and artistic excellence that continues to set standards in the performing arts.

Dance Theatre of Harlem has achieved unprecedented success, bringing innovative and bold new forms of artistic expression to audiences in New York City, across the country and around the world. For more information visit www.dancetheatreofharlem.org.

New York City Ballet is one of the foremost dance companies in the world, with an unparalleled repertory of ballets — most of them created for NYCB — and many of which are considered modern masterpieces. The Company was founded in 1948 by the visionary arts patron Lincoln Kirstein and the legendary choreographer George Balanchine, who served as Ballet Master of NYCB from its inception until his death in 1983.

In 1949, Jerome Robbins joined the Company as associate artistic director and, with Balanchine, created a varied repertory that grew each season. In 1964 NYCB moved to its current home at Lincoln Center’s New York State Theater (now the David H. Koch Theater), which was built especially for Balanchine and NYCB. Today the Company has more than 90 dancers, a 62-member orchestra, an official school (the School of American Ballet), and an institute for choreography (the New York Choreographic Institute).

The Company performs a 21-week season in New York City each year, in addition to annual seasons at both its summer home at the Saratoga Performing Arts Center in upstate New York and at the Kennedy Center for the Performing Arts in Washington, DC. The Company is also responsible for the management of its home, the David H. Koch Theater. In 2009 Katherine Brown was named NYCB’s first-ever Executive Director, a position created to oversee the administrative management of the Company.

In February of 2019, Jonathan Stafford was named Artistic Director of New York City Ballet and the School of American Ballet, and Wendy Whelan was named Associate Artistic Director of New York City Ballet. Widely acknowledged for its enduring contributions to dance, NYCB is committed to promoting creative excellence and nurturing a new generation of dancers and choreographers. Follow @nycballet on Instagram, Facebook, and Twitter, or visit online at nycballet.com.