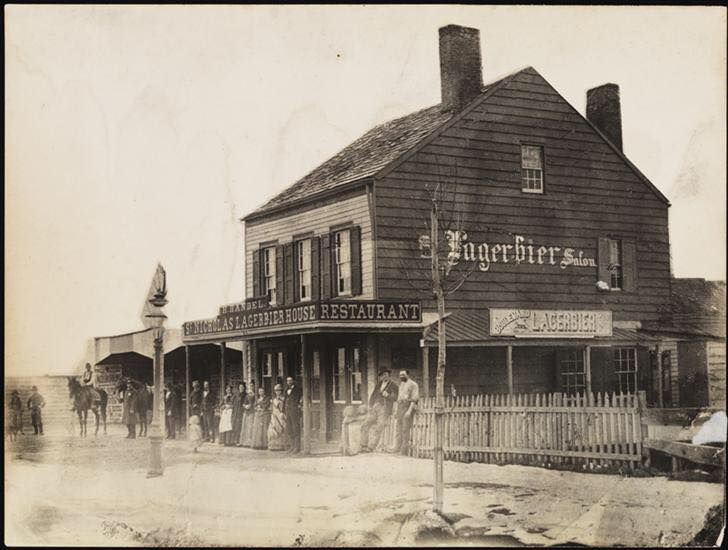 The old wood-paneled St. Nicholas Lagerbier House Restaurant And Salon just west of 113th and St. Nicholas Avenue, sometime in the afternoon after the Harlemites pulled out their best Harlem country life clothes, guys on their horses, women in their aprons, men in their boots in front of what looks like a dirt road Avenue running from left to right and without a sidewalk.

A couple of guys lean against a white wooden picket fence and all for this picture (noticed how the background of the photograph has been cropped and cut at some point in the original negative).

If you look closely on the side of the building on the right, you can see the words “Lagebier,” painted in large white italic letters. We imagine that the Salon in the 1880s was just like any other salon of the period, the New York Times writes that salons were places:

….where survivors of the Industrial Revolution could drink and debate, politick and speechify. The new American proletariat took full advantage of their relatively open political system, voting at higher rates than rich men. More than the beer, saloons provided a gathering place in a nation with little public space for working-class men to argue the issues or meet the candidates.

We’re not that familiar but down the road a bit their competition would have been the Claremont Inn at 124th Street (north of Grants Tomb) where the global gentry lived was serving food, bedding, and closeness to city life.