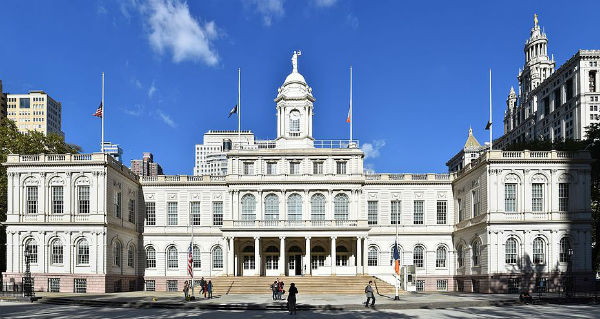 Council Members Helen Rosenthal and Ritchie Torres were joined by elected officials and advocacy organizations from Harlem to Hollis at City Hall this morning as they announced pending legislation which concerns the reporting of sexual harassment.

The group feels that the legislation is important as sexual harassment incidents involving New York City’s from Harlem to Hollis has risen to almost 400,000 employees.

Council Member Rosenthal’s new legislation will require oversight by the Equal Employment Practices Commission (EEPC) to ensure that New York City elected officials, agency commissioners and supervisors are reporting (as they are required to do) all instances of sexual harassment involving staff.

Council Member Torres’ bill will give the city’s Department of Investigation jurisdiction over harassment incidents reported by City employees.

“We are sending a strong message to all New Yorkers that the City Council and City of New York are going to lead by example,” said Council Member Helen Rosenthal, Chair of the Committee on Women and Gender Equity. “For example, if a Council Member witnesses sexual harassment they will report it to our Equal Employment Officer. That is City law. It’s absolutely not okay to just stand by and leave staff on their own, especially when you can see that they are visibly shaken, without institutional back-up.”

“The bottom line is that no employee in this city — no matter where they work– should be subjected to sexual harassment. That is why we passed the Stop Sexual Harassment in NYC Act in 2018, and why we are drafting new legislation now. We will do whatever is necessary to ensure that all New Yorkers work in environments free of harassment and abuse,” Council Member Rosenthal continued.

“To reduce the act of reporting sexual harassment to ‘snitching’ is more than offensive–it contributes to the culture of silence women have been working to break for decades. As elected officials, we should strive to set a higher standard, not give voice to a toxic office culture that silences victims and empowers predators,” said Council Member Margaret S. Chin, Co-Chair of the New York City Council’s Women’s Caucus.

“Council Member Ruben Diaz Sr.’s comments point to why public hearings are critical in achieving a harassment-free workplace for all employees. We must educate our legislators on the inherent power dynamic that exists, and they must hold themselves to the same standard as all employers. Remaining silent only fosters a dangerous culture of harassment by the very institution that should be setting the example,” said The Sexual Harassment Working Group.

Related:  Tasha Smith Talks About "When Love Kills" At Build

“Council Member Diaz’s comments would be unacceptable in any workplace,” said Amanda Farias, Community Advocate of City Council District 18. “The women of the South Bronx need an elected official who will work to dismantle the toxic workplace culture that protects predators and silences victims. Sadly, Council Member Diaz has shown he is not up to that task. Saying that reporting sexual harassment would make him “a rat” is a testament to his character. If he cannot adhere to the basic standards of holding City Council colleagues accountable for sexual harassment, then he shouldn’t have the privilege of representing the people of NYC. We are not going to take this quietly. In the era of the #MeToo Movement, staying silent when we see sexual harassment means we are complicit. I am proud to stand with Council Members Rosenthal and Torres today to say clearly that the women—and men—of The Bronx deserve better.”

State Senators Alessandra Biaggi and Gustavo Rivera issued the following statement: “At a sensitivity training for New York City Council members, Councilmember Rev. Ruben Diaz Sr. stated that he would not “rat” if he saw sexual harassment in the Council’s offices. Rev. Diaz demonstrated total and complete disregard for the safety of people in the workplace.

Since it is the obligation of City Council members and other managers to report sexual harassment, the Council must make it clear that Rev. Diaz or anyone else who refuses to perform this important duty will face substantial discipline.

It would be hypocritical for the government to enforce standards in the private sector if we cannot uphold these standards ourselves. Allowing Rev. Diaz to refuse to report workplace harassment would undermine the integrity of the Council, threatens the people who work there, and sets a terrible precedent that reporting is somehow elective rather than a responsibility.

Reverend Diaz’s behavior is unacceptable. As a City, we must continue to be clear that there is no room for willful neglect of a City official’s responsibility to maintain the safety of New Yorkers.

We support the bills proposed today by Councilmembers Helen Rosenthal and Ritchie Torres to strengthen the Council’s position on reporting harassment.”