Copper Dome Proposed For St. John The Divine Heads To Landmarks For Approval

This week New York City’s Landmarks Preservation Commission will consider proposals to help preserve and rehabilitate the massive, vaulted dome ceiling of The Cathedral Church of St. John the Divine. If approved, the structure’s existing granite dome would be encased by a bronze-hued copper enclosure reports NY Yimby.

Located at 1047 Amsterdam Avenue in Morningside Heights, the Church of St. John the Divine is one of the most recognized religious structures in the United States and one of the largest cathedrals in the world. The crossing’s dome, originally intended as a temporary roof, was built and designed by Rafael Guastavino in 1909. 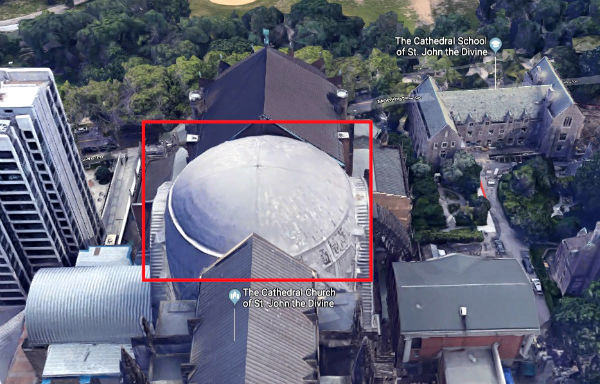 Since that time, portions of the ceiling have experienced water damage caused by a deterioration of the structure’s waterproofing membrane and foam glass insulation. As a solution, Ennead Architects has proposed the assembly of a new roofing membrane above the existing granite structure and lower portions of the roof. The proposed copper material would enclose the entire exterior of the dome.

The Cathedral Church of St. John the Divine officially opened its doors in 1941 and serves as the seat of the Episcopal Diocese of New York. In conjunction with the designation of the Morningside Heights Historic District, the Cathedral was unanimously named a significant architectural landmark in 2017. A public hearing for this phase of alterations will take place on March 26, 2019.