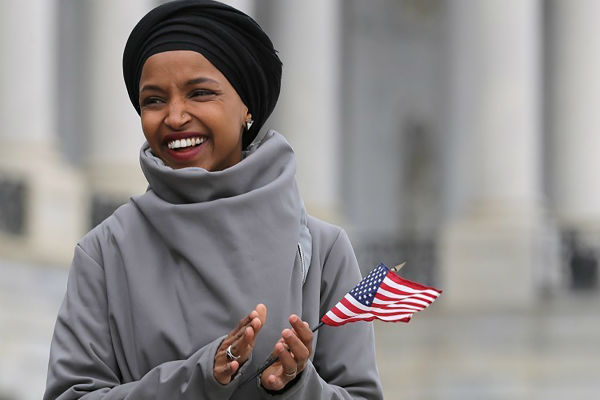 In honor of the Congressional Black Caucus Foundation’s Annual Legislative Conference, VoteRunLead and Black Millennial Convention (BMC) will be joined by Congresswoman Ilhan Omar for the Washington, DC premiere of “Time for Ilhan

”, the documentary film about Congresswoman Omar’s first run for elected office. The screening will be followed by a discussion with Congresswoman Omar and “Time for Ilhan” director Norah Shapiro. Along with VoteRunLead and the Black Millennial Convention, the “Time for Ilhan” premiere and discussion will be sponsored by Washington, DC-based companies, The Outrage and Ben’s Next Door.

Congresswoman Omar is an alumna of VoteRunLead, the nation’s largest and most diverse women’s political leadership training organization having participated in their #RunAsYouAre training program in 2014. The Black Millennial Convention is helmed by fellow VoteRunLead alumna and former Binghamton City Council member Lea Webb. The Black Millennial Convention sheds light on the policy issues impacting Black communities with the goal of connecting millennials of African descent from across the country to increase Black political leadership and inspire civic engagement. The Washington, DC premiere of “Time for Ilhan” will be held in tandem with the annual Congressional Black Caucus Foundation Annual Legislative Conference as Black millennials look to maximize their collective political impact ahead of 2020 and beyond.

Go ahead, pamper yourself when you take up to 70% off on Beauty and Spa deals at LivingSocial.

“I was encouraged by my VoteRunLead family to run for the Minnesota State Senate,” says Congresswoman Ilhan Omar. “As we look to the 2020 elections, I am heartened by the enthusiasm of younger voters who are seeing a US Congress that has become more representative of America. It’s my hope that by continuing to share my story, the more people who don’t typically see themselves in the halls of Congress will pick up the baton and run for office as well. We need elected representatives who look like America now more than ever”.

“Congresswoman Omar’s successful election to the Minnesota State Senate and now the United States House of Representatives, is a story that should be shared with anyone who is thinking of running for office,” says VoteRunLeadBoard of Directors Chair Crystal Patterson. “We are thrilled to share this documentary as VoteRunLead continues to amplify the experiences of our alumni who have run for office and won. We hope that the Washington, DC premiere of “Time for Ilhan” will encourage other young women of color to take the next step towards running for office.”

The Washington, DC premiere of “Time for Ilhan” will be an event centered on the essential civic participation of Black millennials in an intentional space to foster the next generation of Black leaders.

Related: Listen to VoteRunLead founder Erin Vilardi as she talks leadership on The Danny Tisdale Show on Harlem World Radio.

VoteRunLead is a national, nonpartisan nonprofit which trains women to run for office. And win. With more than 33,000 women trained to run for office, VoteRunLead is the largest and most diverse campaign and leadership program in the country. We work to equip women with the right know-how, trainings and how-to’s to help them enter politics with a purpose. We believe that by empowering women to run as they are, they will build a campaign based on their own passion, their own ideas, and their own values.

About Time for Ilhan On November 8, 2016, a young, hijab-wearing mother-of-three named Ilhan Omar made history, becoming the first Somali Muslim woman to be elected to state office in America. She was hailed by the New York Times as, “one of the bright lights in the post-election darkness,” and the documentary film “TIME FOR ILHAN

” intimately chronicles her hard-fought campaign for State Representative in Minnesota’s Senate District 60B, home to the nation’s largest Somali community. A fresh take on the old story of the American Dream, TIME FOR ILHAN

offers an inspiring, stereotype-busting portrait of a rising political star as she begins a bold and powerful political career.

Black Millennial Convention is a national, nonpartisan nonprofit which seeks to share and shed a light on policy issues impacting Black communities, with the goal of connecting millennials of African descent from across the country to increase black political leadership and inspire civic engagement. The BMC consists of Black millennial leaders in media, community activism, academia, policy and politics.