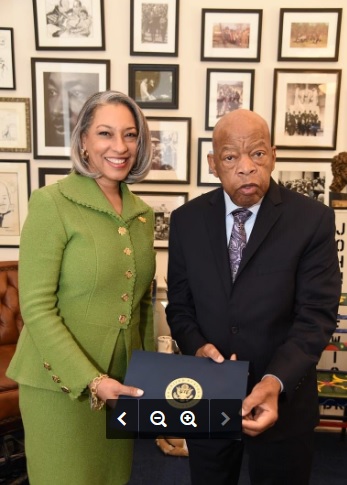 in his historic and museum-like Capitol Hill office. There, he lauded Dr. Jeffries Leonard

for her dynamic, bold leadership as the organization’s 17th national president. Moreover, he praised the premier women’s organization of more than 15,000 professional women, for its integrity, courage, and accountability. While presenting the esteemed service award, Congressmember Lewis further characterized the group’s work as “essential to bending the moral arc of the universe towards justice.” Dr. Jeffries Leonard shared that Congressmember Lewis is a fearless trailblazer whose contributions in both the civil rights and political arenas are unrivaled. “Receiving your vote of confidence, Congressmember Lewis, confirms that we are on the right track, focused on transforming lives and fulfilling our purpose,” said Dr. Jeffries Leonard.

August 6, 2019 marks the 54th anniversary of the Voting Rights Act, which was signed into law by President Lyndon B. Johnson

. With 288 chapters in 42 states, and in the District of Columbia, the Commonwealth of the Bahamas and the United Kingdom, the organization will mobilize, galvanize and utilize across its vast reach to coordinate with elected officials on state and local levels in preparation for the 2020 election. “It is incumbent that every American hold their elected officials accountable to ensure voting rights are protected for generations to come,” Dr. Jeffries Leonard stated.

The Links, Incorporated is an international, not-for-profit corporation, established in 1946. It is one of the nation’s oldest and largest volunteer service organizations of extraordinary women who are committed to enriching, sustaining and ensuring the culture and economic survival of African Americans and other persons of African ancestry. Links members contribute more than 1 million documented hours of community service annually – strengthening their communities and enhancing the nation. The organization is the recipient of awards from the UN Association of New York and the Leon H. Sullivan Foundation for its premier programs, as well as the Golden Torch Award for Corporate Community Service from the National Society of Black Engineers.