Today, New York City Comptroller Scott M. Stringer kicked off Labor Rights Week by announcing that nearly $2 million in stolen prevailing wages has been returned to more than 100 workers during the COVID-19 pandemic. Comptroller Stringer also launched a series of “Know Your Rights” virtual events in collaboration with labor rights groups, community organizations, the Consulate of Mexico and Latin American Consulates Coalition. All events commence on August 31 and the series will culminate on September 4, 2020.

The Comptroller’s Bureau of Labor Law enforces prevailing wage and benefit rates for construction and building service workers employed by contractors on City public work projects. When companies on these public contracts fail to pay the proper wages and benefits, the Comptroller enforces the law to recover the money owed to workers and ensures that they receive the money through outreach. Amid the economic fallout of the COVID-19 pandemic, the Comptroller’s office launched a phone banking campaign in April to return unclaimed wages to workers cheated out of pay. Since March, the Comptroller’s Office has returned nearly $2 million to more than 100 workers.

“I always say that in my office, every week is Labor Rights Week. I believe that workers are their own best advocates when they know their rights, which is why community-based partnerships are so important,” said Comptroller Stringer. “My office is as committed to the enforcement of prevailing wages as we are in connecting workers with the pay they are rightfully owed. The economic fallout of COVID-19 has made this work more important than ever, and I am proud that our redoubled efforts have brought justice to more than 100 workers during these past few challenging months.”

The Mexican Consulate in New York hosts Labor Rights Week every year just before Labor Day. This year’s Labor Rights Week will be a virtual event and will take place from August 31 through September 4, 2020. An MOU is signed every two years in commitment to the partnership between the Comptroller’s office and the Mexican Consulate to promote labor rights and advocate for workers. The Mexican Consulate has similar MOUs with New York State and the United States Departments of Labor. For the Comptroller’s office, the object of the MOU is to ensure workers are aware of their rights to prevailing wages on City-funded public work sites.

During Labor Rights Week the Comptroller’s Bureau of Labor Law will participate in the “Know Your Rights” virtual workshops below:

Deborah Axt, Executive Director of Make the Road New York, said: “At a time when so many families are hurting and there is a great need for emergency income for thousands of excluded New Yorkers, Comptroller Stringer’s initiative put money in the hands of workers that have been cheated out of pay regardless of their immigration status. Wage theft is a persistent and pervasive problem in New York, with employers consistently cheating workers out of money they rightfully earned. We commend the Comptroller for fighting to recoup wages for workers and sending a clear message to employers that this type of behavior will not be tolerated.”

Kyle Bragg, President of 32BJ SEIU, said: “As Comptroller, Scott Stringer has consistently stood up for the rights of workers. We strongly commend the Comptroller’s Bureau of Labor Law for overcoming challenges related to the COVID-19 pandemic to restore to more than 100 workers $2 million in stolen wages they should have received under prevailing wage, especially at a time when so many families are hurting. We strongly support ongoing efforts by his office to put lost wages back in the hands of families that need them., especially at this time.”

Steve Choi, Executive Director of the New York Immigration Coalition, said: “With immigrants representing more than half of our front line workers and thousands ineligible for relief, it is vital that workers receive every cent owed them. Even during the best of times, rampant wage theft remains a reality for all too many hard-working New Yorkers. We applaud the Comptroller’s efforts through the covid-19 pandemic recouping $2 million in stolen prevailing wages for more than 100 hundred workers regardless of their immigration status and ensuring all workers get the compensation they deserve for their labor.”

Jorge Islas, Consul General of Mexico and President of the Coalition of Latin American Consuls in New York, said: “We welcome the Comptroller’s determination and commitment to ensure that all workers, men and women, regardless of their immigration status, are compensated for their hard work. We will continue strengthening our alliance with all the City authorities in order to fight all practices of labor discrimination and abuse, and to encourage all New Yorkers to come forward to denounce them, and claim their rightful lost wages. New York City is home to a significant number of Mexican and Latin American nationals who are not only very much integrated and embedded into the fabric of American society, but also key contributors to their economy and frontline during any crisis. We are living exceedingly difficult times, but supporting the migrants in the region, will undoubtedly help New York City to recover from these extraordinary circumstances.”

Jennifer Sun, Co-Executive Director of Asian Americans for Equality, said: “We at AAFE would like to thank Comptroller Stringer for ensuring that workers receive the wages they are owed, especially during the COVID-19 crisis, when so many low-income families are struggling financially. Through good economic times and bad, employers must meet their obligations to the hard working men and women who make our city run day in and day out, often at their own peril. AAFE is happy to partner with the Comptroller’s Office during Labor Rights Week to make sure all of our communities know about their labor rights.”

Maf Misbah Uddin, Founder and President of the Alliance of South Asian American Labor, said: “The Alliance of South Asian American Labor (ASAAL) is proud to continue it’s partnership with our people’s Comptroller Scott Stringer, all labor-based groups, and our concerned citizens to fight for economic justice for workers. Wage theft is a serious crime and we all must do everything in our power to protect the workers in getting their fair share of pay that they earned regardless of their immigration status. We commend the Comptroller’s office for overcoming all challenges through the pandemic and bringing justice to more than 100 workers during this public health crisis.”

Jonathan Westin, Executive Director of New York Communities for Change, said: “Employers across the City continue to cheat workers out of their hard-earned wages. We applaud Comptroller Stringer for standing up and helping workers who are owed thousands of dollars in compensation. We will continue to work hand in hand with the Comptroller to combat wage theft across the city,” said

Jo-Ann Yoo, Executive Director of the Asian American Federation, said: “Workers, who have always been vulnerable, are hurting more than ever, and the economic fallout from the Covid-19 pandemic has barely begun. It is even more critical in this economic climate that contractors who take public dollars do right by their workers and pay their workers fairly. We thank Comptroller Stringer for championing workers, especially during these tentative economic times, and for holding publicly funded contractors accountable and commend his bureau of labor law for their tirelessly efforts that lead to returning $2 millions in prevailing wages to more than 100 workers through the pandemic. We are happy that workers have an opportunity to claim their stolen wages and we will work with our pan-Asian member agencies to spread the word to the Asian community.”

Since 2014, Comptroller Stringer’s office has assessed more than $30 million in prevailing wage violations and paid over $15 million to employees who were cheated out of their wages. It has also debarred 60 contractors who took advantage of workers – setting an office record. 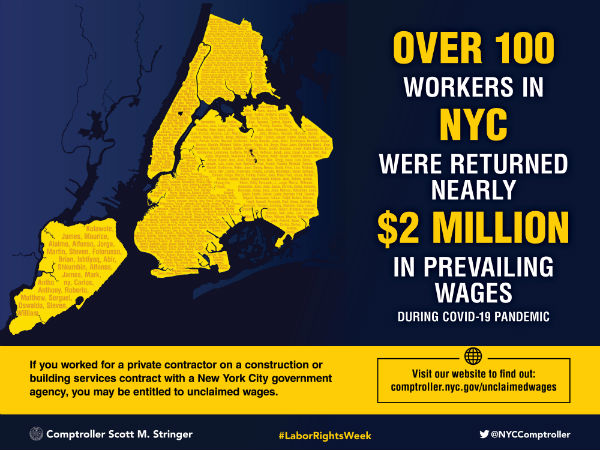