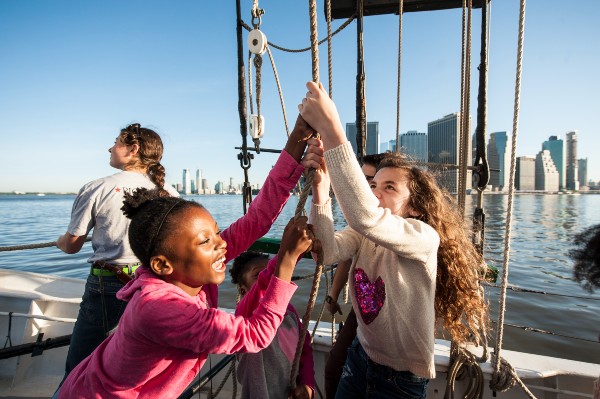 One of those tours is of the historic tall ship Wavertree and the 1908 lightship Ambrose free demonstrations by Bowne & Co. letterpress printers, an outdoor exhibition on Pier 16, cruises aboard the 1930 tugboat W.O. Decker, and the world premiere of What Lies Beneath by On Site Opera, as well as a virtual discussion of the opera.

What Lies Beneath by On Site Opera

On-Site Opera brings opera aboard the deck of the historic tall ship Wavertree with What Lies Beneath, August 28-September 2, 2021. This immersive musical experience invites small groups to travel around the ship’s main deck to hear and see vignettes intended to connect audiences to the complex and tragic stories surrounding American maritime history, both through the enslavement of African people and through novelist Herman Melville’s tragic heroes.

Tickets are available at https://osopera.org/productions/what-lies-beneath/. To make this production as accessible as possible, On-Site Opera is requesting a Suggested Donation of $40 per person in lieu of admission price.

What Lies Beneath uses opera and music to explore themes of social justice, racial inequality and history’s continuing impact on the lens through which the world is experiencing today. Combining song, story, history, and movement as the company returns to live performance, What Lies Beneath is a site-specific and immersive experience aboard Wavertree.

Wavertree is designated on the National Register of Historic Places and represents the thousands of ships that docked along New York’s waterfront over the centuries. Built of riveted wrought iron in 1885, Wavertree is an archetype of the sailing ships of the latter half of the 19th century that, during the “age of sail,” lined South Street by the dozens, creating a forest of masts from the Battery to the Brooklyn Bridge.

From the enticements used to lure Africans into enslavement to Captain Ahab’s final moments of moral reckoning aboard the whaling ship Pequod in Moby Dick, What Lies Beneath is a series of six unique vignettes featuring works from Amistad, by Anthony Davis & Thulani Davis, Ahab, a monodrama by Juliana Hall & Caitlin Vincent, 1619, a choral song cycle by Damien Geter, Billy Budd, by Benjamin Britten, E.M. Forester, & Eric Crozier, Sea Fever, by John Ireland & John Masefield and Riders to the Sea, by Ralph Vaughn Williams and John Millington Sygne.

Opera In-Depth: Exploring What Lies Beneath

Join artists and members of the creative team of in advance of On-Site Opera’s upcoming production of What Lies Beneath specifically designed for the 1885 tall ship Wavertree on Tuesday, August 17, 2021, at 7:30 pm. How do composers choose which stories they tell? What is it like to produce live performances in today’s climate? Reserve free tickets at seaportmuseum.org/osopera. 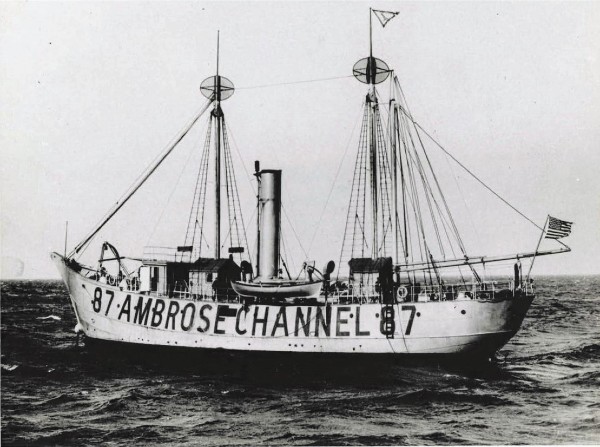 Ambrose is the first vessel to join the Seaport Museum’s fleet and the very first lightship to guard the only shipping channel in and out of the ports of New York and New Jersey—the Ambrose Channel.

As part of the Seaport Museum’s general admission, visitors can tour the multiple decks of this National Historic Landmark and see the living and working spaces once inhabited by sailors stationed on Ambrose.

The launch of the tours coincides with the anniversary of Ambrose’s August 5, 1968 arrival at the Museum.

Access to Ambrose requires walking up an angled gangway. Stairs lead to the lower decks. Mask wearing is required for visitors aboard Ambrose based on current guidance from the World Health Organization.

Entry is FREE and includes access to the ship’s outdoor areas, including the main deck and raised rear deck, and the cargo hold. To learn more and reserve tickets, visit seaportmuseum.org/visitwavertree. 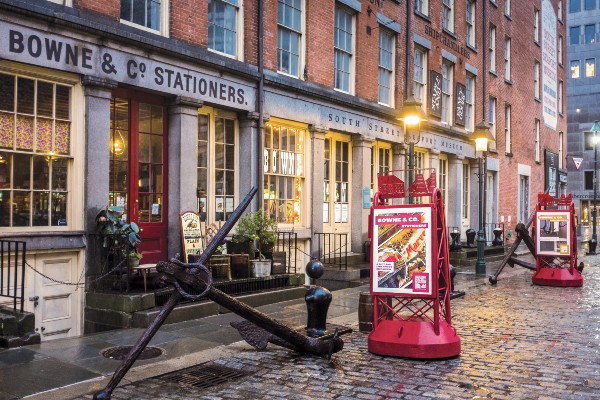 The printers will set up a selection of historic presses outdoors on the steps of 209-211 Water Street. Demonstrations will take place every hour on the hour between 11 am-5 pm and each will run from five to seven minutes long, illustrating the 19th-century printing process with a variety of presses and equipment from the Museum’s Printing History Collection. Items printed throughout the day will be given away as tangible reminders of the experience.

Alongside demonstrations, new products are now available for purchase from Bowne & Co., Stationers in the online shop at bowne.co, including new lines of letterpress-made postcards, broadsides, and boxed notecard sets.

Grab a broadside to support your favorite New York City borough or to celebrate the woodtype characters the Bowne & Co. team used previously as part of the #36DaysofType project. Items purchased online can be shipped anywhere in the country or scheduled for in-person pick up at 209-211 Water Street on Wednesdays, Fridays, and Saturdays. Visit bowne.co to browse and purchase.

The Seaport Museum is also offering a FREE outdoor exhibition on Pier 16, which will provide the opportunity to discover this chapter of New York City’s history.

This series of panels and window graphics will celebrate the people of all backgrounds who lived and worked in the South Street Seaport Historic District, and the many businesses that created the foundations for New York to thrive and become the business and culture mecca it is today.

Using historic photographs, prints, lithographs, and paintings, the exhibition highlights some of the Seaport Museum’s collection of more than 28,000 artifacts and works of art, and over 55,000 historic records.

Cruises will explore the New York Harbor, and views may include the Statue of Liberty, Ellis Island, the Battery, and Governors Island, as you set out on an adventure unlike any you’ve had before!

Advance reservations are recommended, and guests must check in 15 minutes before the scheduled tour. In accordance with current Federal and New York State COVID-19 guidance for public transportation, masks are required onboard W.O. Decker at all times.

Access to W.O. Decker requires climbing angled gangways and a step over her side from a floating deck. Participants must be age 10 or older.

Seaport Museum Members receive discounted price points on Museum activities such as W.O. Decker rides. Memberships start at $50 and help support Museum’s exhibitions, preserve the ships and the collections, grow public programs, and serve over 12,000 students through education initiatives. To join the Museum as a Member, visit seaportmuseum.org/membership.

The South Street Seaport Museum’s indoor spaces are currently closed due to the COVID-19 pandemic.

Bowne & Co. was established by Robert Bowne in 1775 and is New York’s oldest operating business under the same name. By 1900, New York City boasted over 700 printing offices.

Most were located in Lower Manhattan and the South Street Seaport Historic District to facilitate shipping, trade, and finance. Maritime trade industries-growing each year as their goods reached the entire country through the Erie Canal-found themselves in need of a flurry of printed materials for conducting business, causing the demand for stationery, invoices, advertisements, and other printed materials.

In 1975, Bowne & Co. Inc. partnered with the Seaport Museum to open a 19th-century-style print shop at 211 Water Street in the South Street Seaport Historic District.

Today, in addition to the letterpress printing collection, Bowne & Co. embodies the spirit of a turn-of-the-century store that is unique, eclectic, and like none other in the city. bowne.co

The 130-year-old Wavertree, built of riveted wrought iron, is an archetype of the sailing ships of the latter half of the 19th century that, during the “age of sail,” lined South Street by the dozens, creating a forest of masts from the Battery to the Brooklyn Bridge.

Built in Southampton, Great Britain, she circled the globe four times in her career, carrying a wide variety of cargoes.

The ship called on New York in 1896, no doubt one of the hundreds like her berthed in the city. In 1910, after thirty-five years of sailing, she was caught in a Cape Horn storm that tore down her masts and ended her career as a cargo ship.

She was salvaged and used as a floating warehouse and then a sand barge in South America, where the waterfront workers referred to her as “el gran Valero,” the great sailing ship. She was saved by the Seaport Museum in 1968 and towed to New York to become the iconic centerpiece of the “Street of Ships” at South Street two years later.

From 2015-2016, Wavertree underwent a $13 million restoration generously funded by New York City’s Department of Cultural Affairs with support from the Mayor’s Office, the City Council, and Manhattan Borough President and managed by the Department of Design and Construction.

Lightship LV-87, also known as Ambrose, was built in 1907 as a floating lighthouse to guide ships safely from the Atlantic Ocean into the broad mouth of lower New York Bay between Coney Island, New York, and Sandy Hook, New Jersey—an area filled with sand bars and shoals perilous to approaching vessels. South Street Seaport Museum’s Ambrose occupied her original station from her launching in 1908 until 1932.

In 1921 Ambrose became the first lightship to be fitted with a radio beacon, greatly assisting navigation of the channel in poor visibility. In her role as a navigational aid, she was also witnessing to the largest period of immigration in U.S. history, seeing some six million immigrants pass her station.

After her half-century career, she was donated to the newly formed South Street Seaport Museum by the U.S. Coast Guard in 1968. Ambrose is permanently moored at Pier 16 and does not sail the harbor.

The last surviving New York-built, wooden tugboat W.O. Decker was built in 1930 by the Newtown Creek Towing Company and originally named Russell I, after the towing company’s owners.

She was renamed W.O. Decker in 1946 after being sold to the Decker family’s Staten Island tugboat firm. The tugboat was initially steam-powered and later refit with a diesel engine.

She was donated to the Seaport Museum in 1986 and was refit with a diesel engine. W.O. Decker is listed on the National Register of Historic Places and is an exemplary model of the types of steam tugs that were once an abundant sight in New York Harbor.

This unique vessel is a true testament to New York City’s maritime heritage, which is a direct factor in the city’s global prominence today.

Founded in 2012, On-Site Opera is the leading presenter of site-specific operas in non-traditional venues throughout New York City. Rooted in collaboration and storytelling, On-Site Opera celebrates the connection between artist and audience through highly curated experiences led by seasoned opera artists and bold and innovative creative teams.

To date, OSO has produced 18 operas in as many unique locations to critical acclaim, including Shostakovich’s The Tale of The Silly Baby Mouse using large-scale puppets in performances for families at the Bronx Zoo; Gershwin’s Blue Monday in the historic Cotton Club of Harlem; and Rameau’s Pygmalion in Madame Tussaud’s Wax Museum, which explored new technology in opera through the use of Google Glass supertitles.

Each production invites New Yorkers to explore their city in new and unique ways, while cultivating a new generation of opera audiences. For more information, visit https://osopera.org

Founded in 1967, the Museum houses an extensive collection of works of art and artifacts, a maritime reference library, exhibition galleries and education spaces, working nineteenth-century print shops, and an active fleet of historic vessels that all work to tell the story of “Where New York Begins.” www.southstreetseaportmuseum.org