Columbia Expands Manhattanville Campus With ‘The Forum’ In Harlem 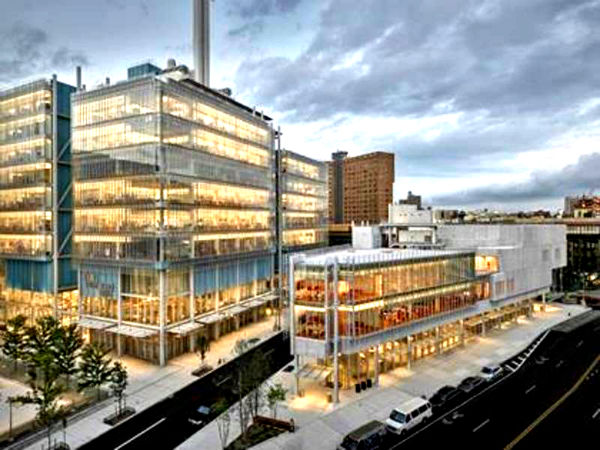 Columbia University completed the first phase of its expansion into Harlem by opening The Forum — a Renzo Piano-designed, 56,000-square-foot building — at its Manhattanville campus on West 125th Street and Broadway.

The Forum will be used for academic conferences, meetings and public discussions, Columbia University officials announced Wednsday. It is the third building to open at the ivy league institution’s Manhattanville 17-acre campus, joining the Jerome L. Greene Science Center and the Lenfest Center for the Arts.

“The Forum completes the spectacular triad of the first buildings on this new kind of urban campus, which reflects not only modern design, but modern values about how we can mutually benefit our local communities – defined by a visual openness and civic function that welcomes everyone in to participate in what only a truly great university can do,” Columbia University President Lee Bollinger said in a statement Patch reports.

The Manhattanville Campus has been “16 years in the making” Bollinger said in his statement. The initiative was launched by Bollinger in 2003 and is Columbia University’s largest capital project since the 19th century construction of its campus in Morningside Heights.

The Forum was designed by Pritzker Prize-winning architect Renzo Piano. Piano and his firm, Renzo Piano Building Workshop, also created the master plan for the Manhattanville Campus and designed the Jerome L. Greene Science Center and the Lenfest Center for the Arts.

“In designing the master plan for the campus and its first three buildings, we wanted to help Columbia as a global university in the city and for the city,” Piano said in a statement. “So New York’s streets and sidewalks are woven into the fabric of the campus. This is not like the campus of earlier centuries. All the buildings are transparent, open to the public, and have amenities for the local community at street level, including plazas and green spaces for everyone to share.”

The Forum and the rest of the Manhattanville Campus buildings will be open to both Columbia University students, faculty, guest scholars and members of the public, university officials said.