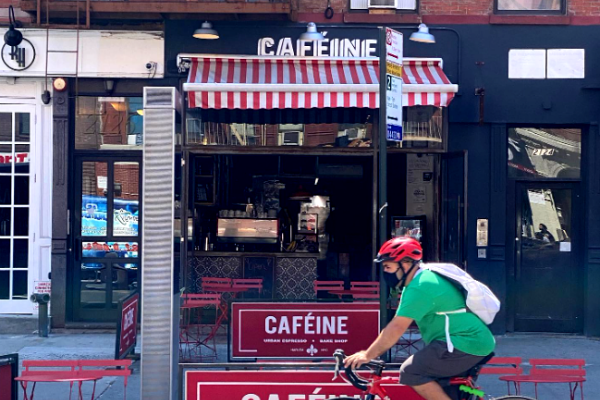 After four years on Frederick Douglass Boulevard, the coffee shop and bakery Caféine closed its doors permanently Monday, another casualty of the COVID-19 Crisis.

Owner Kfir Ben-Ari said to Patch that traffic had dropped by nearly 70 percent since March and that his landlord had refused to reduce rent even as business slowed.

Ben-Ari was also forced to close RDV-Rendezvous Harlem, his French bistro several blocks south of Caféine, back in May.

The coffee shop first opened in June 2016, on Frederick Douglass just south of 115th Street. In addition to espresso drinks, the cafe served fresh-baked French pastries and sandwiches from Rendezvous. Last year, Eater named it one of the city’s best coffee shops for working, citing its counter space and airy, open storefront during warm weather.

Ben-Ari said he expects to have a softer landing after the closures than some other business owners — since the pandemic began, he’s taken another job as a personal chef in the Hamptons, and was driving back to the city Monday after a week on Long Island.

Based on conversations with other restaurant owners in Harlem, he expects that he won’t be the last to close down as the city braces for winter.

“People are wondering whether to keep trying or to move on as I did,” he said.

Related:  Skipping The Second Shot Of A COVID-19 Vaccine May Prolong The Pandemic, Study Finds