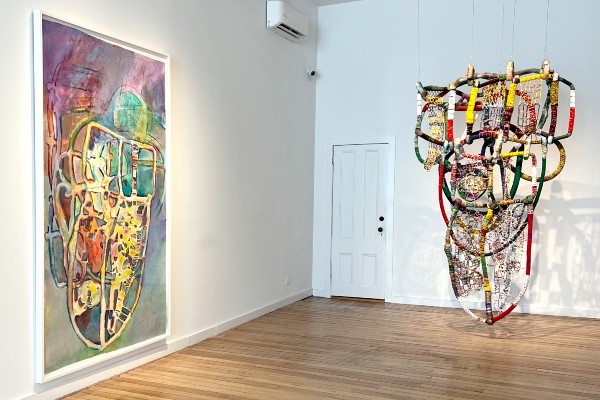 Featuring six new multi-media works, including four large scale mixed media sculptures and two paintings on paper, Across Seven Ruins & Redemptions Somo Kamarioka is an extension of the artist’s multi-year exploration of his conception of the Urban Shaman, which Benzant deploys a wide variety of media and found objects to create dynamic hanging beaded structures inspired by the Yoruba and Kongo community and the beaded regalia of African material culture.

The exhibition will be open to the public from November 11 through January 8, 2022.

“I am surrounded by the aftermath of slavery and colonialism and a people living in various stages of ruin and redemption,” states artist Leonardo Benzant. This series continues the mythology and origin story of a character I have created called the Urban Shaman. This character responds to the ongoing transformation of my own life from a boy growing up in some of the roughest neighborhoods in New York City and the self-destructive behaviors and trauma that resulted. The Urban Shaman represents an archetype that negotiates the shadows of these ruins and reflects a personal and collective struggle to find redemption. Each bead, each strand, each form wrapped and bound pulls from traditional African healing and spiritual practices.”

Benzant’s artistic practice is greatly inspired by the artist’s connection to the African-Atlantic Diaspora and the various modes of communication he has studied and encountered in African-derived rituals. 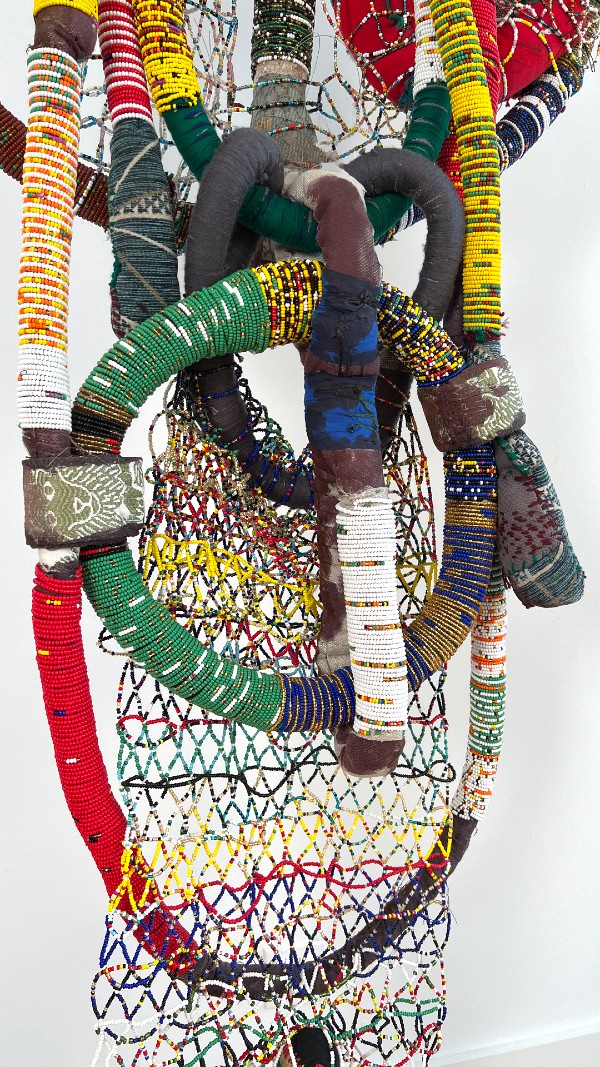 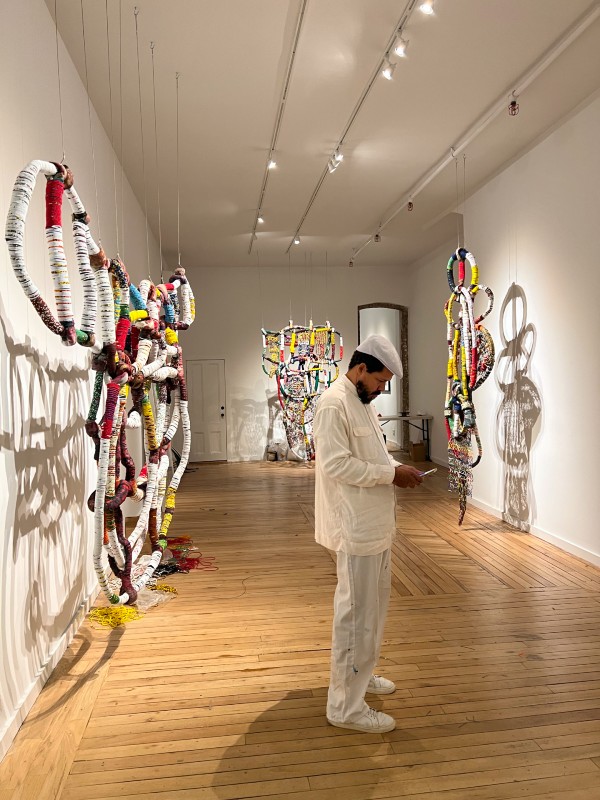 The body of work presented in Across Seven Ruins & Redemptions Somo Kamarioka comes out from a year of incredible transitions in the artist’s life characterized by separations, from his initiation into an African diasporic religion known as “Regla de Ocha” and his relocation to St. Croix in the U.S. Virgin Islands.

His recent oeuvre continues the mythology and original story of Urban Shaman, an alter-ego persona Leonardo has cultivated throughout the last years.

As an alias to the Urban Shaman, Somo Kamarioka is a creolized mixture of Spanish and Kikongo that loosely translates to “we are the chameleons.”

Each bead, strand, and form wrapped and bound pulls from traditional African healing and spiritual practices. Similar to the Central African tradition of nkisi, Benzant’s work is focused on giving power to objects created from repetitive, conjuring actions, and a series of rituals that pull together various energies and forces.

On a material level, the practice references the metamorphosis of the beads, string, and fabric and from a spiritual level, each piece reflects on the adaptive survival strategies and transformations that occur- both personally and collectively – as humans navigate the systems of oppression.

Regardless of the trauma and the violence, Across Seven Ruins & Redemptions Somo Kamarioka materializes a journey of hope, healing and self-determination that serves as the repository of the artist’s personal and collective life experiences.

Claire Oliver Gallery is located in Central Harlem in a four-story brownstone. The gallery’s exclusive commitment to the primary market promoting significant emerging artists has allowed for an intensive focus that has nurtured and grown the careers of their artists.

Many of the gallery’s artists have been included in The Venice Biennale, The Whitney Biennial, and biennales in Sydney, Pittsburgh, and Lyon and have exhibited works in major international museums including the Smithsonian American Art Museum, The Art Institute of Chicago, Center Georges Pompidou, The Philadelphia Museum of Art, and The Los Angeles County Museum of Art amongst others.

Claire Oliver Gallery artists are included in the permanent collections of many important museums worldwide including The Smithsonian American Art Museum, The Art Institute of Chicago, The Tate Britain, The Metropolitan Museum of Art, The State Hermitage Museum and MoMA.

Claire Oliver Gallery held the first American exhibition for the Russian collaborative AES+F, whose work went on to twice represent Russia in the Russian pavilion of the Venice Biennale. Gallery artists have received prestigious fellowships including Fulbright, Guggenheim, USArtist and National Endowment for the Arts.