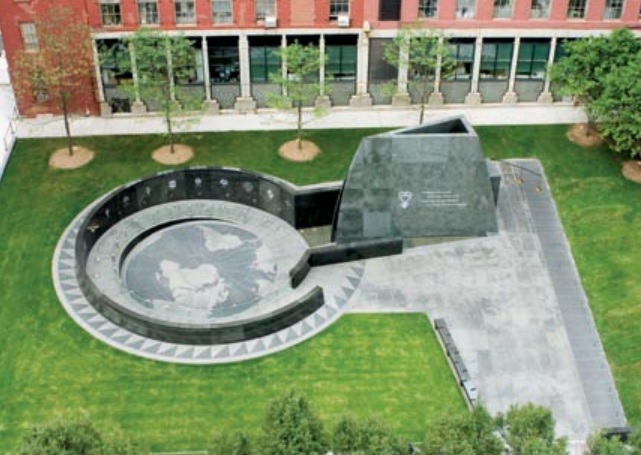 The site of a historic African Burial Ground associated with the former Reformed Low Dutch Church of Harlem dating back to the late 17th century.

The historical burial ground was discovered in the early 2000s beneath the East 126th Street Metropolitan Transportation Authority Bus Depot. The public memorial will be outdoors at the location of the historic burial ground and the cultural education center will be housed in an adjacent building. The cultural education center could include elements such as a visitor center, exhibitions explaining the history of the site, and community space for programming inspired by the Burial Ground. The cultural education center is intended to offer a variety of public programming and activities, which may include artist workshops, artists-in-residence, visiting scholars and thought leaders in arts and culture, advocacy, literacy and social justice.

“The Harlem African Burial Ground Memorial and Cultural Education Center will honor East Harlem as a sacred place of historical learning and serve as an inspiration for both residents and visitors alike,” said NYCEDC President and CEO James Patchett. “I’m pleased that we are moving closer to making it a reality, and I want to thank Council Member Ayala, the Department of Cultural Affairs, the Harlem African Burial Ground Task Force, Manhattan Community Board 11 and the local community for their ceaseless dedication and support on this project.”

“The Harlem African Burial Ground Memorial and Cultural Education Center will help our community preserve an essential piece of our history while paying homage to both the free and enslaved New Yorkers of African descent who were buried there more than two centuries ago. I look forward to a non-profit organization being selected as the operator through this RFEI and getting us one step closer to bringing this project to fruition,” said Council Member Diana Ayala.

“This marks a big step toward bringing a new historical and cultural landmark to Harlem, one that will provide public programming while commemorating the African American presence in this area dating back centuries,” said Cultural Affairs Commissioner Tom Finkelpearl. “Honoring those who came before us is essential to building a city that makes everyone feel at home, and we need a partner to help bring this extraordinary, community-driven vision to life. We look forward to working with the Harlem African Burial Ground Task Force and the selected non-profit operator to shape the Harlem African Burial Ground Memorial and Cultural Education Center into a powerful reminder of both NYC’s roots and its promise for the future.”

The Harlem African Burial Ground Task Force (HABGTF), a group of citizens working with the City and the descendant church of the Reformed Low Dutch Church, was founded in 2009 and designated by Manhattan Community Board 11 in 2011 as the group representing the interest of the Burial Ground. The HABGTF, led by co-chairs Reverend Dr. Patricia A. Singletary and former New York City Council Speaker Melissa Mark-Viverito, have called for the recognition of the historical Burial Ground and the development of a memorial and cultural center where the history of the site and of Harlem can be shared and explored with the public.

Assisting NYCEDC in the review and assessment of responses will be an advisory group comprised of HABGTF members, City officials, and local professionals and leaders in the cultural field. This group will provide critical insights from their expertise with the project to ensure that the responses are consistent with vision of the HABGTF. Convened by DCLA Commissioner Tom Finkelpearl, this group of volunteers will share their knowledge of the site’s history, organizational development, capital campaigns, cultural programming, operations, and urban design to identify strong responses.

“Notions about American life and history are incomplete without knowledge of a rich and compelling American narrative that has been lost for over three centuries,” said Sharon Wilkins, Manhattan Deputy Borough Historian and Harlem African Burial Ground Task Force member. “This history involves the sacrifices, struggles, contributions and achievements of free and enslaved Africans who played a significant role in creating the infrastructure, culture, society and economy of the United States. In continued collaboration with the NYC government and other stakeholders, the Harlem African Burial Ground Task Force is pleased to participate in the RFEI process to locate a visionary site operator that will; work to fulfill the mission of erecting a memorial to honor the cemetery where the remains of this colony builders lie and develop and cultural education space that both celebrates this history and promotes culturally and socially rich experiences for diverse population to visit.”

In 2015, NYCEDC began working in partnership with the HABGTF, Manhattan Community Board 11, and the Bus Depot Task Force which included elected officials, City agencies, and community stakeholders (including the HABGTF), and established goals for the redevelopment of the now decommissioned East 126th Street Bus Depot, which occupies an entire city block. After approval of the proposed land use changes through the City’s Uniform Land Use Review Procedure in 2017, the project will include the memorial and cultural education center, new housing, 80 percent of which will be designated as permanently affordable housing, community facility space, as well as job-generating commercial space and a plan to train and hire East Harlem residents.

The permanent public memorial will be approximately 18,000 square feet in size and open to the sky at the location of the historic Burial Ground. To encourage the long-term success of the Memorial and Cultural Education Center, the City has committed to requiring an annual contribution from the future developer to offset operating costs. Additional archaeological and preservation work will take place at the site before any new development occurs and the City has committed to ensuring that the memorial and cultural center are the first completed components of the redevelopment.

NYCEDC will be hosting two information sessions about the RFEI to provide an overview of the procurement and answer questions related to the project. The first session will be held at One Liberty Plaza and the second session will be held at Silberman School of Social Work at Hunter College on October 29, 2019. All proposals are due on December 10, 2019, and questions regarding this RFEI should be directed to HABG_RFEI@edc.nyc.

Tom Finkelpearl, Commissioner, DCLA – Tom Finkelpearl is the Commissioner of the New York City Department of Cultural Affairs. In this role he oversees city funding for nonprofit arts organizations across the five boroughs and directs the cultural policy for the City of New York. Prior to his appointment by Mayor Bill de Blasio, Commissioner Finkelpearl served as Executive Director of the Queens Museum, P.S.1 Contemporary Art Center, working on the organization’s merger with the Museum of Modern Art, and served as Director of the Department of Cultural Affairs Percent for Art program.

Reverend Dr. Patricia A. Singletary – Rev. Dr. Patricia A Singletary is the Pastor of the Elmendorf Reformed Church and the Co-Chair of the Harlem African Burial Ground Task Force. The Elmendorf Reformed Church, originally established in 1660 as the Low Dutch Reformed Church of Harlem, is the oldest church in Harlem and the church that established the Harlem African Burial Ground. Rev. Dr. Singletary has led the charge to reclaim, preserve and recognize this sacred cemetery and honor the memory Harlem’s colony builders, enslaved and free Africans who were major contributors to the growth and success of New York’s economy, infrastructure and society.

Melissa Mark-Viverito – Melissa is the former Speaker of the New York City Council and current Co-Chair of the Harlem African Burial Ground Task Force. She represented the 8th District, which includes East Harlem, El Barrio, and the South Bronx. Melissa played an instrumental role in City’s broader acknowledgement of the historical significance of the Harlem African Burial Ground site. Before being elected to the City Council in 2005, Melissa worked for over a decade in local activism and nonprofit organizations.

Justin Garrett Moore, AICP – Justin Garrett Moore is an urban designer and the executive director of the New York City Public Design Commission. He has extensive experience in urban design and city planning—from large-scale urban systems, policies, and projects to grassroots and community-focused planning, design, and arts initiatives. He is the co-founder of Urban Patch, a social enterprise based in Indianapolis that focuses on community revitalization in American inner cities and a member of the NYC-based collective BlackSpace.

Patricia Cruz – Patricia Cruz is the Executive Director of Harlem Stage, where she oversees programming, administrative management, and fundraising. Cruz has also served as a board member of the Urban Assembly, the Andy Warhol Foundation, Art Table, and was formerly the president of The New York Foundation for the Arts. In 2014, Harlem Stage was awarded the Charles Dawson Award for programmatic excellence and sustained achievement in programming from the Association of Performing Arts Presenters.

Michael Lythcott – Michael Lythcott is the Chairman of the Board for the National Black Theatre in Harlem, the first revenue-generating black theatre arts complex in the Unites States. Michael also serves as the Vice Chairman of Uptown Grand Central, a 501c3 nonprofit organization dedicated to delivering programs through collaborations with businesses, residents and neighborhood organizations across East Harlem.

Joy Glidden – Joy is an organizer, art advocate and curator with 25 plus years of senior admin experience providing guidance to cultural organizations through her expertise in capital campaigns, fundraising, organizational development and outreach strategy. Joy is the founder of the DUMBO Arts Center, and the DUMBO Art Under the Bridge Festival in Brooklyn, NY, Host and Director of the WLAE PBS TV series Art Index TV and former Director of Louisiana ArtWorks, in New Orleans. She is currently the Senior Advisor for a new legacy project serving under-known artists.

New York City Economic Development Corporation is a mission-driven, non-profit organization that creates shared prosperity across New York City by strengthening neighborhoods and growing good jobs. NYCEDC works with and for communities to provide them with the resources they need to thrive, and invests in projects that increase sustainability, support job growth, develop talent, and spark innovation to strengthen the City’s competitive advantage.