significant strides toward the Mayor’s goal to create 300,000 affordable homes by 2026 through the Housing New York (HNY) plan.FY 2019 saw the highest production of units for homeless, seniors, and supportive housing of any year on record.

“We are making tremendous progress in our goal to expand affordable housing in our city, and this year we’ve produced a record number of homes for our most vulnerable friends and neighbors,” said Mayor de Blasio. “Each affordable home secured is a family served, and we’re going to continue to push forward on our goal to make New York a fairer city for all.”

“All New Yorkers deserve safe and stable housing opportunities that are not only within their means, but meet their needs. Creating homes for seniors, the homeless, and those in need of supportive services has always been a priority, and this year we’ve reached a milestone that makes our commitment to the most vulnerable among us crystal clear,” said HPD Commissioner Louise Carroll. “I want to thank our many partners on all levels of government, as well as our deep bench of committed development partners who have worked with us to deliver on our goal to create 300,000 affordable homes for New Yorkers.”

“HDC is proud to have contributed $1.8 billion in bond financing towards affordable housing this fiscal year,” said HDC President Eric Enderlin. “With a deep commitment to meeting the diverse needs of our communities, we are delivering more housing to our lowest income individuals and families, formerly homeless households, aging seniors, and those in need of supportive services. The ongoing success of the Housing New York plan is made possible thanks to the steadfast leadership of the administration, as well as the countless contributions of our many dedicated partners. As we celebrate this latest milestone, I’d like to congratulate everyone who continues to work tirelessly to make New York City a more affordable place to live.”

Since its inception, Housing New York has prioritized stabilizing the lives of New Yorkers in need by increasing access to affordable housing opportunities. In the past Fiscal Year, the City financed the construction and preservation of more permanent housing for formerly homeless New Yorkers than any other Fiscal Year on record.

The City financed nearly 2,000 affordable homes for seniors in this fiscal year alone, for a cumulative total of 8,476 senior restricted units financed since the beginning of the de Blasio administration. HPD also recently launched its Affordable Independent Residents for Seniors (AIRS) program which will leverage the zoning code to accelerate the creation of affordable, rent-stabilized homes for seniors throughout the five boroughs.

Of the 25,299 homes financed this past Fiscal Year, which ended June 30th, 54 percent will serve very low-income families earning less than $48,000 per year, including more than 5,300 homes for families of three earning less than $28,800 per year. Over 4,000 of the 25,299 affordable homes financed this year, and over 36,000 of the total 135,437 HNY units financed to date will remain affordable permanently. All other units are subject to binding regulatory agreements that ensure affordability for at least a generation.

A snapshot of HNY production to date: 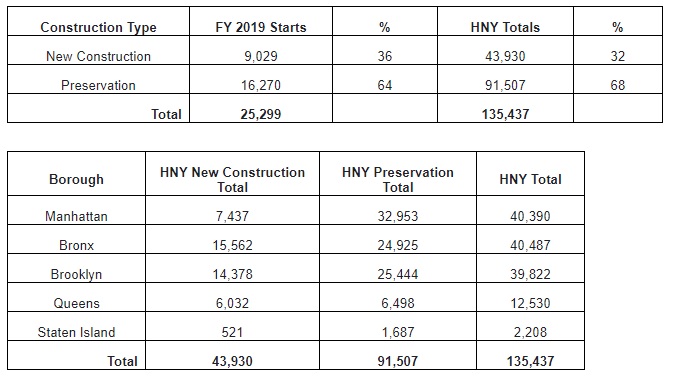 The full numbers for FY 19 are available here.

“The City has made significant strides in increasing access to affordable and supportive housing, particularly for those most vulnerable in our communities. We must keep this momentum moving forward and ensure that agencies like HPD have the support they need to ensure the availability of deeply needed housing resources,” said Council Member Robert E. Cornegy Jr., Chair of Housing and Buildings Committee.

“As Chair of the Assembly’s Housing Committee, I’ve been proud to work in partnership with the de Blasio administration in preserving and creating affordable housing at a rate that’s been never before seen in New York City,” said Assembly Member Steven Cymbrowitz. “The programs we have implemented have given hope and security to so many families, individuals and seniors, including our most vulnerable New Yorkers, and I look forward to working with the city to continue this momentum in the coming year.”