Childs Restaurants “Old Algiers” In Harlem, The McDonald’s Of The 1800’s 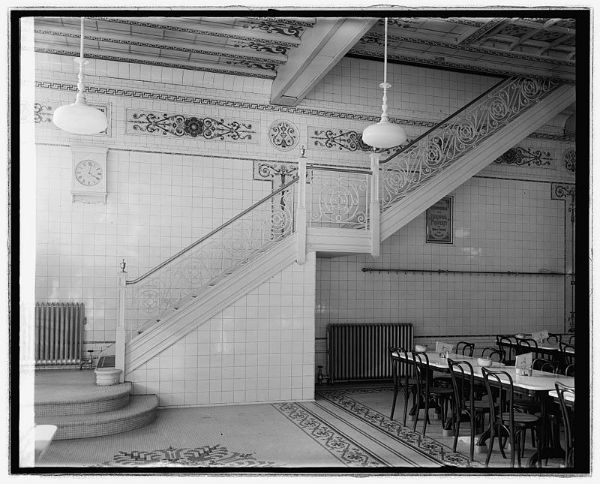 In 1929, William Childs announced that the family had taken over the Archambault Restaurant at 2678 Broadway, and would relaunch it as “Old Algiers”.

Childs Restaurants was one of the first national dining chains in the United States and Canada, having peaked in the 1920s and 1930s with about 125 locations in dozens of markets, serving over 50,000,000 meals a year, with over $37 million in assets at the time. Childs was a pioneer in a number of areas, including design, service, sanitation, and labor relations. It was a contemporary of food service companies such as Horn & Hardart, and a predecessor of companies such as McDonald’s.

The first Childs Restaurant was launched in 1889 by brothers Samuel S. Childs and William Childs, on the ground level of the Merchants Hotel (current site of One Liberty Plaza, also previously the Singer Building), at 41 Cortlandt Street (between Broadway and Church), in New York City’s Financial District. The brothers’ concept for the establishment was to provide economical meals to the working class, quickly, with an unusually high emphasis – for the period – on cleanliness and hygiene. Their novel design format included white tiles, white uniforms, and waitresses instead of then-common waiters. In addition to these signature characteristics, Childs locations also featured their pancake griddles in the front window. Within five years, Childs had grown to five profitable locations. They also are credited as inventors of the “tray line” self-service cafeteria format, which they introduced in 1898 at their 130 Broadway location.

In 1898, the brothers, confident and ready for more aggressive expansion, combined with several investors to legally incorporate The Childs Unique Dairy Company, with a capitalization of $1,000,000, and the stated intent to “establish and operate restaurants in New York City and elsewhere”. It was widely speculated and finally confirmed in 1912, that several officers of the Standard Oil Company were investors in the restaurant chain, including Henry Morgan Tilford and Charles Sweeney. At some point, “DuPont interests” also gained a significant stock position, which would eventually cause problems for the family owners.

In 1899, F.O. Hendrick, a nephew of Samuel and William Childs, launched a casual luncheon restaurant at 142 Fulton Street, practically across the street from his uncles’ first location on Cortlandt Street, which was by then 10 years old and highly successful. After a short period of family competition, Hendrick ultimately brought his restaurant under the Childs umbrella and remained an operating executive of Childs Restaurants until the family lost control.

In 1906, fifteen similar restaurants (called “green doors”) which were independently owned and operated by Ellsworth Childs (brother of Samuel and William) were consolidated into the company. Thereafter, Ellsworth remained an executive of Childs until his death in 1929 and is cited as a driving force behind the physical expansion during that period.

In September 1919, the company launched an employee stock ownership plan for its restaurant managers, and three years later, extended the plan to all employees. Within 10 years, employees would own almost 25% of the company’s common stock.

By 1925, the chain operated 107 locations in 29 cities, served 50,000,000 meals every year, and was reporting consistent annual profits of $2,000,000. The company also grew to include other real estate interests. In March 1925, company President Samuel S. Childs died, although he had not been personally involved in the business for some time, instead focusing on his political career and many other civic and business activities. Operation of the restaurants had long been delegated to his brother and co-founder William, as Vice President and General Manager, and other family members.

The late 1920s witnessed a roller-coaster of events for the company. In November 1925, the Childs company became a major partner in the development of the landmark Savoy-Plaza Hotel, at Fifth Avenue and 59th Streets. Around 1927, William Childs began to impose his vegetarian dietary preferences on the chain’s menu, which generated significant backlash from customers and his fellow managers and investors. The company’s stock reached a low of $44 in 1928, and during a board meeting on December 12, 1928, William was pressed into resigning as President but remained Chairman of the Board. At the following board meeting on January 30, 1929, William attempted to turn the tide by firing several executive officers and company directors, replacing them with family members. A proxy battle ensued, but on March 7, 1929, William and his supporters lost the fight to retain control of the company he co-founded 40 years before, by then valued around $37,000,000. He did retain a modest non-controlling equity position, which he eventually sold and/or bequeathed. 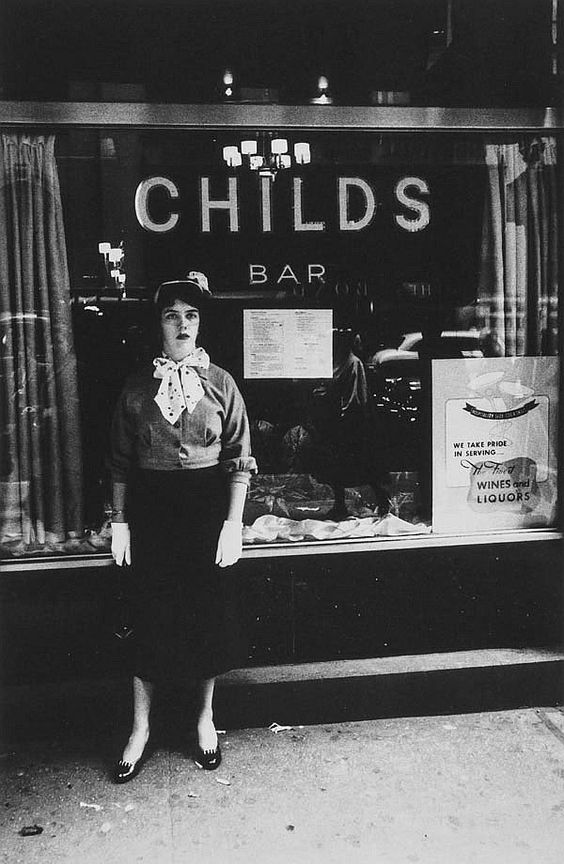 In the 1930s, no longer under the direction of the Childs family, the chain returned meat to its menus, introduced alcohol at many locations (after the repeal of Prohibition), and launched a new subsidiary division called “The Host”, meant to be lower-priced than Childs. The company also obtained the hot dog vending license for the 1939 World’s Fair in Flushing Meadows, which turned out a financial mistake.

In August 1943, under pressure of significant debt maturity, the company filed for bankruptcy reorganization. Childs emerged from bankruptcy in 1947 and continued to operate through the 1940s and 1950s.

By 1950, the company had shrunk to only 53 locations and was losing money. Nonetheless, it managed to acquire the candy and ice cream maker Louis Sherry Inc., and announced several significant operational changes, including “returning to its old custom of flap-jack making in the windows” and the introduction of prepared meats, to eliminate the need for butchering on-site.

In 1955, a young hotelier named A.M. “Sonny” Sonnabend assumed the presidency of the Childs company and pointed the enterprise in a new direction. In a series of coordinated transactions, the company’s name was changed to Hotel Corporation of America, it acquired the Plaza Hotel in New York (across the street from the Savoy-Plaza Hotel, which Childs had developed), and entered into long-term leases for three other hotels in Boston, Cleveland, and Chicago. The company was then structured into three divisions: restaurants, manufacturing, and distribution of packaged foods (via subsidiaries Recipe Foods, Fred Fear, and Louis Sherry), and hotels.

In 1961, substantially all of the remaining Childs restaurant operations, now greatly diminished in number and considered part of the company’s past, were sold to the Riese Organization (National Restaurants Management Inc.), which as of 2009 operates more than 100 restaurants throughout New York City, including franchised units of Dunkin’ Donuts, KFC, Pizza Hut, T.G.I. Friday’s and Houlihan’s. A number of the Riese properties are former Childs Restaurants.

In 1970, Hotel Corporation of America (formerly Childs) was again renamed, to Sonesta International Hotels Corporation (NASDAQ: SNSTA). As of 2009, the company operates 25 hotels on 3 continents, and owns several cruise ships, and is still led by the Sonnabend family. 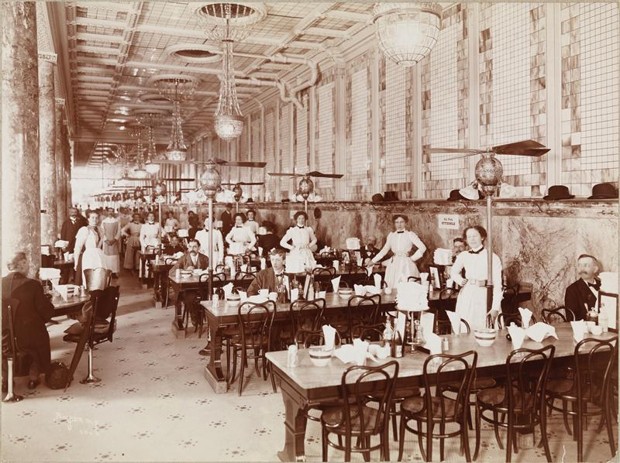 Although legally separate from the core Childs Restaurants chain, the founders and various family members operated a number of other businesses throughout the 20th century. Below are brief summaries of those operations.

In 1929, William Childs purchased a historic property near his home in Basking Ridge, NJ, and converted it – without making any structural modifications – to an inn and restaurant. The Olde Mill Inn and The Grain House Restaurant. This upscale operation was distinctly different from the traditional Childs Restaurants, yet it also met with great success. The family continued to operate it for some time, but The Olde Mill Inn and Grain House Restaurant was eventually acquired by The Bocina Group, which continues to operate it as of 2009.

In December 1929, after being ousted from the core company, William Childs announced that the family had taken over the Archambault Restaurant at 2678 Broadway, and would relaunch it as “Old Algiers”

In December 1929, after being ousted from the core company, William Childs announced that the family had taken over the Archambault Restaurant at 2678 Broadway, and would relaunch it as “Old Algiers” – the first in a series of “old-world” themed restaurants. In this business, he partnered primarily with three nephews, Ellsworth E. Childs, William S. Childs, and Wallace A. Childs. The new company was soon organized under the corporate name Old London Inc., which was also the theme of their second 1,000-seat location, launched in 1931 at 130 West 42nd Street. This enterprise did not expand much further, likely due to William’s advancing age. He died in 1938 and is buried behind the Basking Ridge Presbyterian Church near his New Jersey estate, with a large number of other Childs family members.

As of 2009, the original F.O. Hendrick location is still an operating diner, now called the Anytime Cafe.