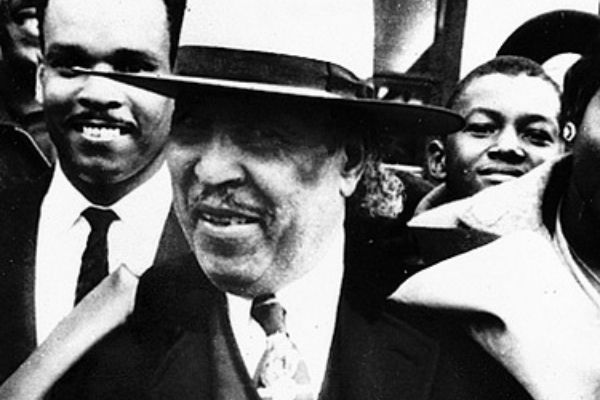 “Sweet Daddy” Grace was the founder and first bishop of the predominantly African-American denomination of the United House of Prayer For All People.

He was a contemporary of other religious leaders such as Father Divine, Noble Drew Ali, and Ernest Holmes. Daddy Grace, an innovative Christian evangelist, faith healer, pastor, and bishop, used his unique worship style to birth a distinctive religious institution on the American scene. Many of his followers claimed miraculous acts of faith healing while attending services and others saw his ministry as a sign from God of the imminent return of Jesus Christ. 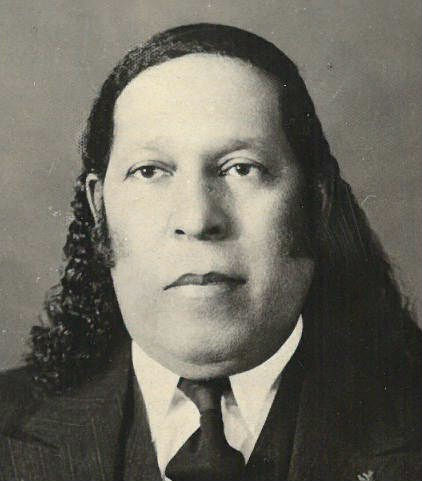 Marcelino Manuel da Graca’s parents were Manuel (1837–1926) and Gertrude (1847–1933) da Graca. Marcelino da Graca’s sibling group consisted of one brother, Benventura, and three sisters: Eugenia, Slyvia and Louise. He was born January 25, in Brava in the Cape Verde Islands, then a Portuguese possession off the west coast of Africa. There is no verifiable information to confirm Grace’s exact birth year, but most sources either state 1881 or 1884.

The family of Manuel da Graca, the father of Marcelino, arrived in America at the port of New Bedford, Massachusetts, aboard a ship called the Freeman in May 1902. It is unclear whether Marcelino was aboard the ship in 1902, but ship manifests show that he visited America in 1903, and in 1904 he came as a cabin passenger aboard the schooner called Luiza.

Marcelino Grace married twice. His first wife was Jane “Jennie” Lomba, a Cape Verdean woman also known as Jennie Lombard. They were married in 1909. She bore Grace a daughter, Irene, in 1910 and son, Norman in 1912. Norman died in 1947. Whether they officially divorced was disputed. His second wife was Angelina (Montano) Grace, of Mexican descent, whom he married in 1932. She bore him a son, Marcelino, in 1935. They divorced in 1937.

In her book Daddy Grace, Marie W. Dallam notes that the entire da Graca family were Roman Catholics in their homeland and opened up to different forms of the Christian experience once they immigrated to the United States. The USA-based Protestant Church of the Nazarene was the first non-Catholic Christian church to establish a mission in Cape Verde in 1900. 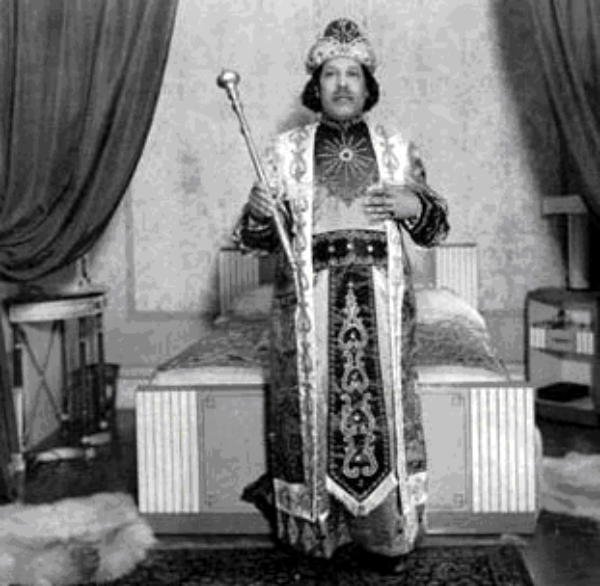 Benventura da Graca, the brother of Marcelino, would later become a Church of the Nazarene pastor in the USA. Marcelino, however, was said inside the da Graca family (according to the research done by Dallam) to have always been a “special child”. Unlike the conventional ministry of his brother, he went on to establish a unique and independent Christian ministry. After becoming a famous bishop it was recounted that as a youth he had received a commission to preach directly from God.

Throughout the 1920s and 1930s, Bishop Grace traveled America preaching and establishing the United House of Prayer for All People like the one in Harlem on 126th Street.

After leaving his job as a railway cook, Marcelino Manuel da Graca, using the anglicized version of his name, Charles Manuel (Emmanuel) Grace, began using the title “Bishop”. In 1919, he built the first House of Prayer in West Wareham, Massachusetts at the cost of thirty-nine dollars. He later established branches in Charlotte, North Carolina and Newark, New Jersey. Throughout the 1920s and 1930s, Bishop Grace traveled America preaching and establishing the International Peace Mission Movement Harlem headquarters on 126th Street.

The Constitution and By-Laws of The United House of Prayer, promulgated in 1929, stated that the purpose of the organization in pertinent part was “to erect and maintain places of worship and assembly where all people may gather prayer and to worship the Almighty God, irrespective of denomination or creed.” He traveled extensively throughout the segregated South in the 1920s and 1930s preaching to integrated congregations years before the civil rights struggles of the 1950s and 1960s and the religious ecumenical movements which followed.

One of the principles that Bishop Grace taught which provoked controversy was the concept of one man leadership. Grace used the Bible as his reference and taught that God only used one man at a time (e.g. Noah, Moses, and Jesus) for divine leadership and that he, Bishop Grace, was God’s choice for the only ‘divine leader’ of today. In light of the foregoing one of the many criticisms made against Grace is the following statement which Grace is to have allegedly made in the early 1940s: “Salvation is by Grace only. Grace has given God a vacation, and since He is on vacation, don’t worry about Him. If you sin against God, Grace can save you, but if you sin against Grace, God cannot save you.” At the Church in Newport News, Virginia, someone asked Daddy Grace if he is God? He said: “No! I wouldn’t be God.”

The most extensive research done, that by Edward E. Curtis IV and Danielle Brune Sigler in their book “The New Black Gods” on this widely repeated statement, one that appeared in the book “Black Gods of the Metropolis” by Fauset shows that “Nonetheless, the “interpretation of this point – that Grace claimed he himself was God – has been almost completely definitive in both academic and popular literature, and only a handful of writers have ever questioned it, usually as an aside”.

Furthermore, the book “Black Gods of the Metropolis” by Fauset shows, according to the research by Curtis/Sigler, that “Mr. Fauset selectively quoted certain parts of the original message which changed the context.” The original statement as explained in “The New Black Gods” was spoken by a United House of Prayer members and not by Bishop Grace. Thus showing that both the members and Bishop Grace thought that he was not “God himself”, but merely an “intermediary” and “the path to salvation” for and to God.

Related:  Grants Available To Mark Legends & Lore Locations From Harlem To The Hudson

For Bishop Grace and his followers, the miraculous stories as told of the Apostles in the New Testament of the Bible did not end with their deaths. Grace asserted that such miracles were available again, through him. As “Daddy Grace”, the bishop and leader of the United House of Prayer, he was well known and respected by his followers as a faith healer and miracle worker.

According to researcher Marie W. Dallum, in her book Daddy Grace, Bishop Grace also claimed that by the power of the Holy Ghost he could raise the dead. One such person who claimed that he did was his younger sister Jeannie (Eugenia), who reportedly died and was raised again by Grace. She would accompany Grace in his missionary tours and testify to the fact.

“I am come as the power of the Gospel to heal the sick, cleanse the lepers, raise the dead, cast out devils..(I) do these things in (Jesus) name.”

This account and others by followers of Bishop Grace and recorded in the United House of Prayer publications were picked up and reported by the outside press. In a 1926 news article the New Bedford Standard-Times Bishop Grace was quoted as saying: “I am come as the power of the Gospel to heal the sick, cleanse the lepers, raise the dead, cast out devils..(I) do these things in (Jesus) name.”

Video of Daddy Grace in Harlem:

According to researcher Marie W. Dallum, Grace was an early prototype of what is now understood in western culture as the “celebrity preacher”. Active during the early and mid-20th century, Grace used attention-getting maneuvers such as wearing loudly colored suits with bold, different-colored piping and shiny buttons, along with glitzy, expensive jewelry and long fingernails painted red, white, and blue to draw attention.

Standing 5 foot 8 inches tall and bronze of skin color Daddy Grace wore shoulder-length hair and some onlookers compared his countenance to one that some would say resembled what Jesus Christ may have looked like in subjective popular opinion according to the Charlotte News of Sept 11, 1938. 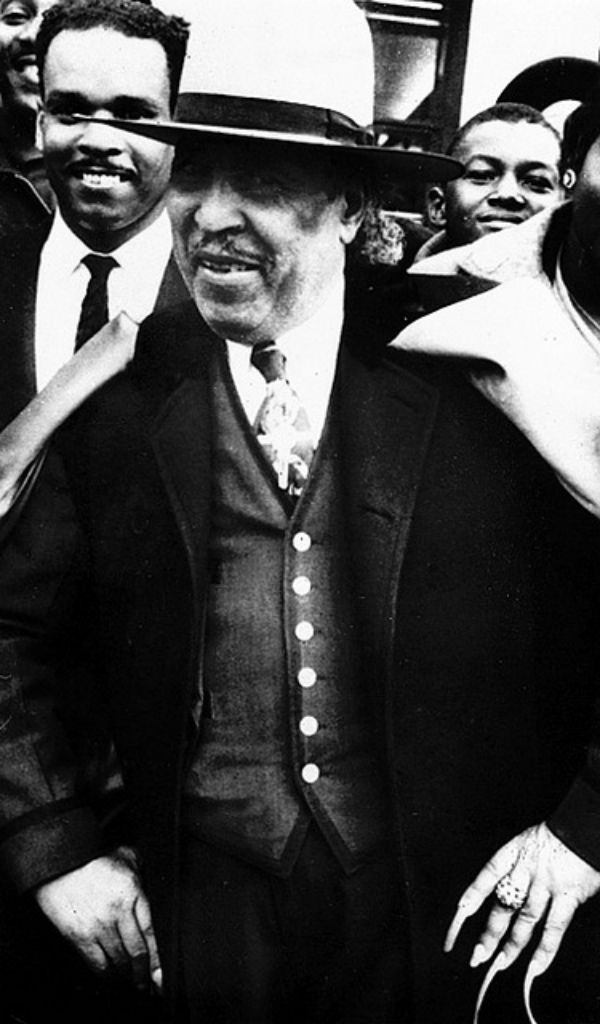 Bishop Grace lived and traveled in style. For travel, he had a Packard, a Pierce-Arrow, and a Cadillac, all chauffeur-driven, while he would be accompanied by bodyguards, assistants, United House of Prayer elders, staff, and secretaries. Grace collected up to 42 very large and expensive mansion homes, filled with expensive furniture, works of art, and amenities in various states across the USA, as well as a 25-room mansion in Havana, Cuba that he purchased in 1936. He also accrued several income properties across the USA. One such notable purchase was of The Eldorado, an iconic twin-towered apartment complex facing Central Park in the Upper West Side of Manhattan, New York City in 1953.

Grace culminated his real estate purchases with a massive palatial 85-room home in the historic Berkeley Square, an exclusive part of the West Adams, Los Angeles, California, area for the very wealthiest African Americans in 1958. In a time of legal housing discrimination in the pre-1950s USA, much of Bishop Grace’s purchases were no less than revolutionary and were appreciated as such by his largely African-American followers.

Grace also extended his property acquisition campaign to his religious rivals as well, evicting Father Divine from his International Peace Mission Movement Harlem headquarters after he had bought it from under him in 1938.

The purchase of trophy properties was not limited to large parsonages, landmark apartment complexes, and swanky hotels. Grace also extended his property acquisition campaign to his religious rivals as well, evicting Father Divine from his International Peace Mission Movement Harlem headquarters after he had bought it from under him in 1938. Detroit’s James F. Jones (minister), known as Prophet Jones, lost his signature 54-room Arden Park-East Boston Historic District parsonage, as well as the headquarters cathedral building of the sect he had founded, the Church of Universal Triumph, Dominion of God, to Bishop Grace in 1957.

Bishop Grace’s property acquisition campaign can be seen in the context of his duty, as the leader, to build up the United House Of Prayer For All People according to the constitution and by-laws of the organization. Those rules also stipulate that the bishop is designated as the trustee of all church property on behalf of the members.

The most notable organizational outcome of the 40-year ministry of Bishop Grace in the United States of America is the religious denomination known as the United House of Prayer For All People. The United House of Prayer is active across the country and is characterized by its lively gospel music shout bands, affordable soul food restaurants, annual “Christian Saints” marching parades replete with marching bands and baton-twirling majorettes as well as its public street baptisms, sometimes performed by a fire hose.

Each successive leader/Bishop of the United House of Prayer for All People continues in the one-man leadership style initiated by Bishop Grace and each successive Bishop is called “Daddy” in turn.