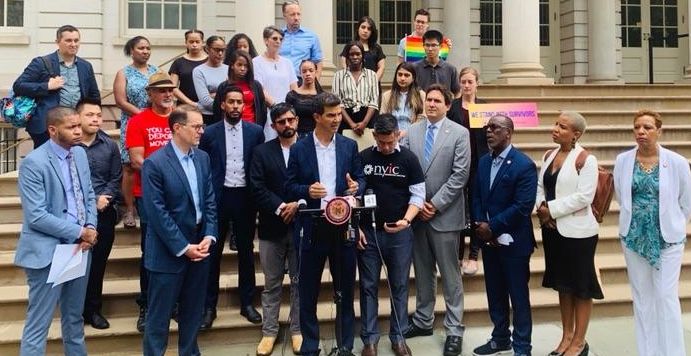 Today the Co-Chair of the Black, Latino and Asian, Caucus, uptown Council Member Ydanis Rodriguez …Chair of the Immigration Committee Carlos Menchaca, The Progressive Caucus Co-Chair Council Member Ben Kallos, Public Advocate Jumaane Williams, Ravi Ragbir of The New Sanctuary Coalition, The New York Immigration Coalition, Sanctuary for Families, Immigration Equality, Council Members and other advocates, made a calling to all New Yorkers to stand firm in their rejection of the Trump Administration’s attempts to disenfranchise the immigrant community and to remain assured of their rights to access public services. Electeds reaffirmed their commitment to escalate their efforts in fighting the current Administration’s attacks through acts of civil disobedience and called on their colleagues at all levels of City government to join in the efforts. The Trump Administration will be releasing the rule officially today, Wednesday, August 14th, which will go into effect on October 15th, 2019.

The Public Charge Rule has become the administration’s latest move to prevent documented and undocumented immigrants from entering the U.S. or adjusting their immigration status. The recent news has caused many immigrants to leave social programs out of fear of repercussions. Today, the coalition of advocates and electeds offered New Yorkers valuable information and resources to help them make informed decisions about accessing or retaining indispensable medical, food and housing assistance.

The Rule is slated to impact lower income immigrants that access health coverage through Medicaid, Supplemental Nutrition Assistance Program (SNAP or Food stamps), Low-income subsidy (LIS) Part D Medicaid prescription drug costs, public housing, and section 8 housing rental assistance (vouchers), among others.
Recent studies suggests that people have already begun to abstain or withdraw from public programs like food stamps and housing vouchers. The rule would significantly affect immigrants whose income is below $31,000 a year for a family of four.

“Lets call this what it is, a racist and anti-immigrant rule, that will exclude the poor and marginalized from gaining their legal status. This rule unfairly targets immigrants that are poor and fleeing from their countries,” said Council Members Ydanis Rodriguez and Council Member Daneek Miller, Co-Chairs of the Black, Latino and Asian Caucus “We will not allow this administration to dictate our values in this matter, and we will always speak up for all our immigrants.”

“Believe me when I say, that as a Mexican American, as a native of El Paso, I know New York City has your back,” said City Council Member Carlos Menchaca, Chair of the Committee on Immigration. “The City has prepared for this attack on our immigrant communities for years, particularly since I joined the Council during the Obama Administration. The infrastructure we put in place is why you see so many organizations and immigrant New Yorkers rising up and unafraid to fight back. Remember: there is time to check your status and see if this rule applies to you. I encourage everyone to call 3-1-1 or the ActionNYC Hotline (1-800-354-0365) and say ‘public charge’ to talk to a City-funded and trusted lawyer.”

“President Trump is looking to change the Public Charge rule to hurt immigrant families,” said Council Member Ben Kallos, Co-Chair of The Progressive Caucus “It is sad to see the extent his administration is willing to go to make life difficult for hard-working immigrants families. I stand against this change because I understand and believe in the words etched into the Statue of Liberty’s base in bronze. ‘Give us your tired, give us your poor’. America is the land of opportunity, President Trump is doing his best so that only the well to do have access to that opportunity. That is not in the spirit of true American ideals and we intend to fight it.”

Ravi Ragbir Executive Director of the New Sanctuary Coalition said, “The New Sanctuary Coalition and people of faith will fight the occupant in the White House, the administration and ICE to stop their inhumane policies. This public charge policy change is another way for this administration to attempt to break our spirits. People came to this country to make it better for their families and their children. They work long hours and two maybe three jobs to make this possible. Yet there are times they will need help and they should not be punished for it. Our faith leaders will work with each other, our allies, and with our elected officials to stop a racist President from destroying our communities.”

“This is just another cruel and inhumane policy put out by the Trump administration with the goal of dividing us,” said Council Member Stephen Levin. “New Yorkers should rest assured that we will do everything in our power to fight back against these attacks and protect our social safety net. Our friends and neighbors in the immigrant community need to know that they are welcomed here and that New York City supports them.”

Councilwoman Carlina Rivera said, “This rule is just the latest attempt by the Trump administration to sow chaos and fear in our immigrant communities and New York will not let it stand. By weaponizing essential healthcare, housing and nutrition programs, this rule intentionally strips fundamental human rights from the three million immigrants who call the Five Boroughs home and so many more across the country. I will fight alongside my colleagues in the Council and the Attorney General’s office to take legal action against this unjust rule and combat this culture of hate,”

Council Member Brad Lander said, “No family should be forced to choose between taking care of their families and staying together. The Trump administration’s despicable attempt to turn public assistance for the people who need it most into a trap to tear families apart will not go unchallenged. New York City will do everything we can to make sure that communities have accurate information and access to the services they need to keep their families healthy, fed and housed.”

Council Member Farah N. Louis said, “As the daughter of Haitian immigrants who now proudly represents a primarily immigrant district in the New York City Council, I am outraged that immigrants remain under the scope of the Trump Administration. Immigrants are not a threat to American society or our way of life; they are hard-working individuals whose sole priority is to achieve the American Dream. Known worldwide as the land of opportunity, this right has become a privilege for a select few. The systemic xenophobia and racial discrimination from the Trump Administration has villainized immigrants who now live in fear within the shadows of our community. The proposed public rule change will disenfranchise thousands of immigrants, exacerbate homelessness and poverty, while forcing many families to go hungry or forego medical treatment to gain lawful status. These impossible choices are only indicative of the cruelty of this policy and the burden that it unfairly places on immigrants who are already struggling to survive. The 45th Council District, like many communities throughout the City of New York, is heavily comprised of immigrants who have made incredible sacrifices to rebuild their lives in a foreign land. No one should be penalized for their reliance on public assistance, particularly when their national origin is used to bar them from opportunities for advancement. I urge lawmakers to expand rather than restrict the path towards citizenship for the millions unheard and unseen,”

Executive Director for The Northern Manhattan Improvement Corporation, Maria Lizardo said “The Public Charge rule will result in thousands of our community residents being denied access to the most basic services, including access to healthcare and food. NMIC stands ready to provide support to immigrants in our community by making all our programs, including access to a mobile food pantry and legal advice and representation, available to everyone regardless of immigration status.”

Alisa Wellek, Executive Director of the Immigrant Defense Project said, “President Trump’s Public Charge rule manufactures new ways for the Administration to discriminate against and narrow opportunities for immigrants, including access to important state initiatives that promote safety and stability for all New Yorkers. We will fight back against this rule and continue to help Immigrant New Yorkers stay in their homes and out of the deportation pipeline.”

Nabah Ikram, Immigration Specialist with Sanctuary for Families’ Immigration Intervention Project said “The proposed Public Charge Rule is a heartless attack on the well-being and health of vulnerable communities. At Sanctuary for Families, we are seeing this first-hand as a significant number of survivors of domestic violence and sex trafficking, confused by the new rule’s language and its arbitrary standards, are already canceling critical public assistance benefits to which many are legally entitled. There is an extremely evident chilling effect on communities and we have been speaking one-on-one with clients trying to ease their fears in an already hostile environment towards immigrants. The change in the definition of public charge from ‘primarily dependent’ to ‘likely at any time to use or receive one or more public benefits’ is vague and leaves too much discretion to officers who will arbitrarily weigh factors at their own will not taking into account the totality of the circumstances. We urge everyone to fight against this draconian new rule which further solidifies the notion that the US is only for the wealthy and villainizes immigrants and people of color.”