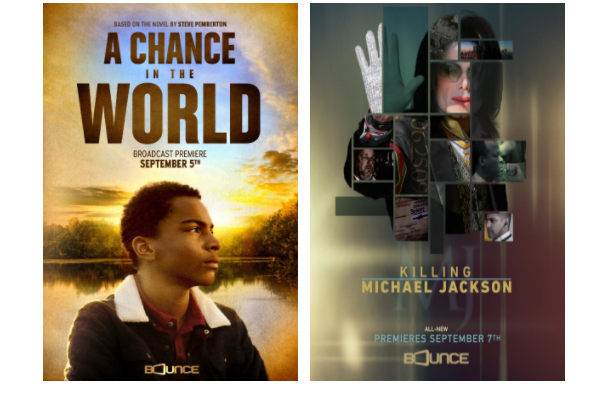 Bounce, the first and only broadcast and multi-platform entertainment network serving African Americans from Harlem to Hollywood, will make a Labor Day splash with a pair of exclusive U.S. premieres. On Saturday, September 5, 2020, Bounce world premieres the original motion picture “A Chance In The World” based on the moving life story of Steve Pemberton.

Then on Labor Day, Monday, September 7, 2020, Bounce will debut “Killing Michael Jackson,” an explosive documentary revolving around the death of the pop music icon.

A Chance in the World – The true, inspiring and unbelievable story of Steve Pemberton (Terrell Ransom, Jr.), an orphaned boy who endures the abuse of his foster parents (Kelly Owens, Lawrence-Hilton Jacobs) and siblings.

While searching for his biological family, he meets a caring teacher (Tom Sizemore) who will change the course of his life. U.S Exclusive World Premieres Saturday, September 5, 2020, at 6:30 pm (ET).

Killing Michael Jackson -This ground-breaking documentary special, featuring never-before-seen images of that fateful day, is told through the eyes of detectives Orlando Martinez, Dan Myers, and Scott Smith, all three of whom were involved in the investigation that ultimately leads to the arrest and conviction of Jackson’s doctor Conrad Murray. U.S. Exclusive Premieres Monday, September 7, 2020, at 7 pm (ET).

Bounce (@bouncetv) is the first and only broadcast and multi-platform entertainment network serving African Americans, with programming seen over-the-air, on cable, on DISH channel 359, over-the-top on Roku®, on mobile devices via the Bounce and Brown Sugar apps, and on the web via BounceTV.com.