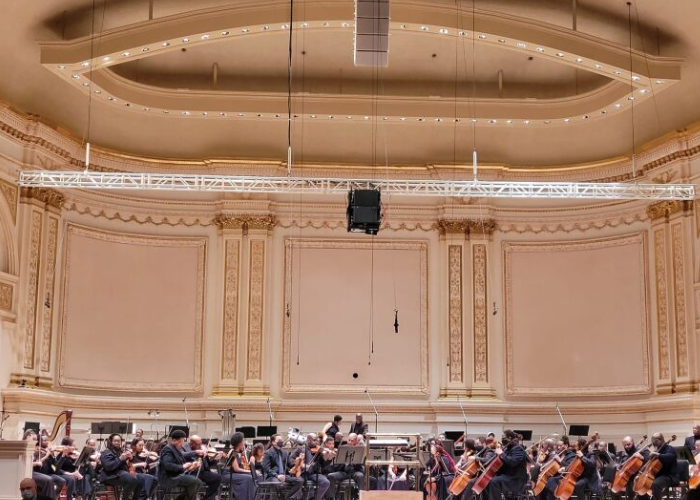 BON is a collective of Black orchestral musicians dedicated to creating an inclusive and equitable environment for Black people in the orchestral field.

The group was built on the motto, “if we increase our connection to one another, we can harness our creativity and develop initiatives that benefit Black musicians.”

BON will galvanize the industry, break down barriers to inclusion, and confront long-standing inequities in treatment and process.

On Monday, May 2, 2022, BON launches its first public-facing campaign focused on advancing equity and inclusion in American orchestras. Through an open letter — “Dear American Orchestras”—BON calls for American orchestras to take decisive action against racial injustice in the industry.

The campaign provides a platform for allies who seek a race equity culture to commit to change in the orchestral community.

Funders—both institutional and individual—invest in the long-term viability of organizations already committed to Black orchestral artistry and think big about the possibilities for American orchestras in our changing culture and society.

Unions, particularly the American Federation of Musicians and related conferences (ICSOM, ROPA), to stand in solidarity with Black members by honoring the values of fair workplaces and addressing barriers to fair and equitable audition and tenure practices.

For more information, watch the call to action or read the open letter here.

Artists, audience members, educators, music lovers, culture bearers, and enthusiasts are invited to co-sign this letter by adding your name to the list of Black orchestral musicians calling on American orchestras for change. Co-sign the letter here.

The official campaign hashtag is #DearAmericanOrchestras.

On Monday, May 9, 2022, BON calls for a Day of Solidarity, an opportunity for allies, champions, and supporters, within the music industry and beyond to amplify the call to action of “Dear American Orchestras.” Supporters are asked to amplify the campaign by posting a single graphic—provided by BON— to their Instagram, Facebook, or Twitter timelines. The graphic will be a mosaic of the thousands of Black orchestral musicians integral to the fabric of the American orchestral community.

They have collaborated with Gateways Music Festival and Working IDEAL and have received community support from the Black Music Action Coalition. The Black Orchestral Network is generously supported by the Andrew W. Mellon Foundation.

“We are committed to calling out the structures, systems, policies, and practices that have had harmful impacts on the American orchestral industry,” said Violist Jennifer Arnold. “Achieving equitable solutions requires questioning and dismantling of existing norms and taking collective action. We are at an unprecedented time where there are a large number of open positions in orchestras. If there is any time to attract, hire, and promote Black musicians, it is now.”

“A concert hall doesn’t just amplify sound – it’s a place of cultural affirmation,” said Clarinetist Alexander Laing. “Being a Black orchestral musician or audience member shouldn’t require additional doses of isolation. We’ve seen in our own lives and practices what can happen when we increase and sustain our connection, and we’re going to scale that. We know what emerges will support Black artists and improve the state of the American orchestral industry.”

“I had a deep desire to do something that would create a radical shift in our industry. On realizing I wasn’t alone with these thoughts, BON was born,” said Oboist David A. Norville. “Black orchestral musicians thrive when we connect with one another, evaluate experiences, commiserate, and make a plan for intentional change. There are already many extraordinary Black orchestral organizations, and BON will serve as a highway or proxy that finds points of connection between these organizations. If we can continue to unite, the resulting agency would be transformative.”

“After training and working tirelessly to be competitive in the field, I found the industry severely lacking in fundamental ways, resulting in toxic work environments, inequitable practices, and organizations that struggle to connect with the broader communities they are a part of. The art form deserves better than what is currently on offer, as do all the young musicians who aspire to become professionals,” said Cellist Joy Payton-Stevens.

“The Black Orchestral Network brings together a community that will strengthen and align support for people who have historically had to endure in isolation. There are so many incredible Black musicians who have much to say with the music and even more to contribute to the field,” said Oboist Shea Scruggs. “I am excited to play a role in bringing them together to elevate and sustain their careers and stewardship of the art form.”

“We see a world where Black classical artists are connected and form a rich, expressive, and culturally affirming network. The Black Orchestral Network is a vehicle for securing that future,” said Trombonist Weston Sprott. “Connection within the Black orchestral community is vital to our sense of belonging and well-being. The understanding and improvement of our experience are critical not only to our future in orchestral music but also to the future of orchestral music as a practice and the music industry as a whole.”

“This is the moment the industry steps up and really pushes the truth to our audiences and confronts long-standing inequities in treatment and process,” said Oboist Titus Underwood. “BON’s declaration is centered around reforming the industry into an American orchestra because it can’t be that while sidelining Black artistry.”

The Black Orchestral Network will amplify the needs and perspectives of Black musicians and pressure the industry to center the Black experience (“lifting our voices”), host a series of virtual community conversations for various sectors of their community (“cultivating community”), and produce a podcast titled “Black Music Seen” that features Black orchestral musicians in their own voice (“telling our story”).

The Black Orchestral Network (BON) started with a theory: if we increase our connection to one another, we can harness our creativity and develop initiatives that benefit Black musicians.

In the tradition of organizations like the National Association of Black Journalists and the National Society of Black Engineers, BON seeks to create an inclusive and equitable environment for Black people in the orchestral field.

We see a world where Black orchestral artists easily find reflections of themselves and their complexities in the history and future of orchestral music.