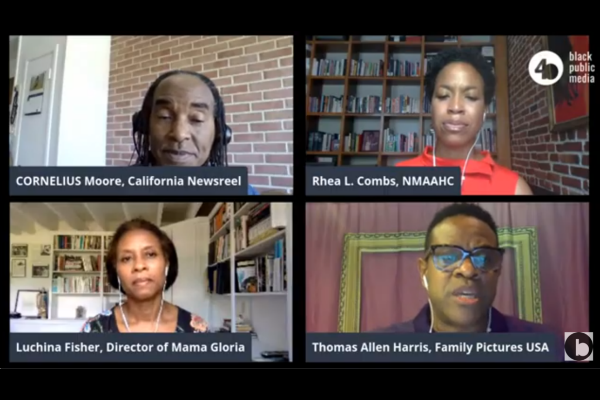 Black STORIES Matter! This was the subtext of the recent biennial National Black Media Story Summit.

Black Public Media (BPM) convened the Black creative community around strategies for creating a more equitable content distribution ecosystem for the event as a civil rights movement 2.0 emerges and the COVID-19 crisis rages on. The three-day virtual summit was held June 23 through 25 as part of the 40th-anniversary celebration of BPM, the country’s oldest nonprofit media arts organization dedicated solely to supporting media content about the global Black experience.

“The COVID-19 pandemic and the renewed call for justice by the #BlackLivesMatter movement have highlighted not only the inequities faced by the Black community here in the U.S. and globally but those of storytelling itself,” said Leslie Fields-Cruz, executive director of BPM. “Black creatives and executives in media must be a part of the decision-making on what stories are told and how these stories are being distributed to ensure they reach their intended audiences and share the full breadth of diversity of our experiences.”

Keynote remarks were delivered by Phillip Agnew, a nationally recognized cultural critic, strategist and speaker, who co-founded the Dream Defenders community organizing group in the wake of the murder of Trayvon Martin and Black Men Build. “We stand on the legacy of Ida B. Wells and Samuel Cornish, W. E. B. Du Bois and Sojourner Truth, Frederick Douglass, John Brown Russwurm, Peggy Peterman and millions more, remembered and forgotten, who declared truth in the dark, who scribbled a most bittersweet prescription to America’s great case of amnesia. You are the seers,” Agnew charged the assembled Black artists. “Every time blindness affects the eyes of this country you bring sight to our lives, to our deaths, to our lineage.”

“The Pandemic Pivot” town hall explored how organizations and storytellers are making adjustments to stay afloat and engage audiences in response to the pandemic. The conversation featured panelists Ryan Wilson of the Gathering Spot and Jason Steer of the Apollo Theater, and was moderated by Junebug Productions’ Executive Artistic Director Stephanie McKee-Anderson. Each speaker described how their respective institutions are developing online events during the COVID crisis.

“It’s a level playing field for everybody now and it’s what can you produce and what stories do you want to tell and how can you make sure you can engage your audience in a very intimate way?”

“For us it was really looking at materials we already had and how we could now present it … We developed a digital platform, Apollo Digital, to actually present that work,” said Steer. “It’s a level playing field for everybody now and it’s what can you produce and what stories do you want to tell and how can you make sure you can engage your audience in a very intimate way?”

Day two of the summit featured a two-part panel session titled “Rebuilding the Distribution Ecosystem.” Part one featured Maori Holmes of BlackStar Film Festival and Dr. Yaba Blay of Professional Black Girl, while the second half featured Michelle Materre of Creatively Speaking and Aymar Jean Christian of OTV-Open Television. The panelists examined how the traditional distribution system across media has been upended recently and ways in which Black content makers and creatives can use this challenge to level the playing field.

“I like the freedom involved with independent platforms: YouTube, Facebook, Instagram,” said Blay. “I don’t have any experience with big networks but it is that question — based upon the short experiences that I have had — of how much would I have to adjust of the story, how much would I have to adjust of myself. Because I am committed to making sure that we see ourselves in a particular way and I’m not sure that everybody gets that or that I would be given the freedom to tell the story in the way that I do.”

Christian described OTV as a platform for intersectional television, which produces, develops and distributes independent projects, helping media makers through staff consultations and connecting them to those who can supply discounted equipment and services. “I think we have to think creatively about marrying production and distribution and thinking about systems of mutual support so it’s not just, ‘I get famous and rich and screw everybody else,’ but that my success leads to the success of others behind me.”

Rhea Combs of the Smithsonian National Museum of African American History and Culture joined filmmakers Thomas Allen Harris (Family Pictures USA) and Luchina Fisher (Mama Gloria) discussing Riggs’ legacy and impact on their work in telling the stories of those in the LGBTQ and Black communities. The panel was moderated by Cornelius Moore of California Newsreel.

A salute to trailblazing filmmaker Marlon Riggs, called “Clips and Conversations” on Thursday included a selection from the pioneering director’s film Tongues Untied and a clip from an archival interview with Riggs. Rhea Combs of the Smithsonian National Museum of African American History and Culture joined filmmakers Thomas Allen Harris (Family Pictures USA) and Luchina Fisher (Mama Gloria) discussing Riggs’ legacy and impact on their work in telling the stories of those in the LGBTQ and Black communities. The panel was moderated by Cornelius Moore of California Newsreel.

“When I first saw the film [Riggs’ Tongues Untied], it was just completely liberating. I was really able to identify an authentic voice. It also challenged me to be more authentic,” Harris said. “I did not have to hide my queerness or my activism, coming from an activist family. They could be integrated into my filmmaking.”

Harris also acknowledged BPM for its role in supporting digital creatives. “Black Public Media has been pioneering in opening up this digital storytelling space for Black filmmakers since 2005, if not before,” he said.

The Black Media Story Summit was supported by the National Endowment for the Arts, New York City Department of Cultural Affairs, the Corporation for Public Broadcasting, the John D. and Catherine T. MacArthur Foundation, Acton Family Giving, and the New York Council for the Arts, and in partnership with the National Multicultural Alliance, WORLD Channel, ITVS, POV and Saltbox.

Black Public Media (BPM), formerly the National Black Programming Consortium (NBPC), is committed to enriching our democracy by educating, enlightening, empowering and engaging the American public. The nonprofit supports diverse voices by developing, producing and distributing innovative media about the Black experience and by investing in visionary content makers. BPM provides quality content for public media outlets, including, among others, PBS and PBS.org and BlackPublicMedia.org, as well as other platforms, while training and mentoring the next generation of Black filmmakers. Founded in 1979, BPM produces the AfroPoP: The Ultimate Cultural Exchange documentary series and manages the 360 Incubator + Fund, a funding and training initiative designed to accelerate the production of important Black serial and interactive content.

Missed part of the summit? Visit the BPM YouTube Channel to see video of the conversations and panels.