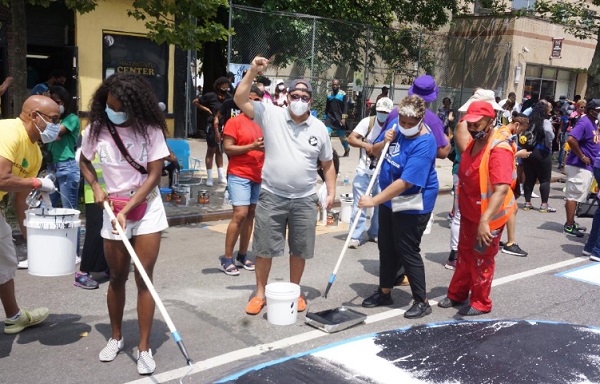 The Black Lives Matter Harlem Street Mural project kicked off on Friday, July 3, with a full presentation of speakers including Rev. Al Sharpton, Attorney General Letitia James, State Senator Brian Benjamin, Manhattan Borough President Gale Brewer and Mayor Bill DeBlasio, among others. While it was assumed, based on the Mayor’s presence and remarks, that city played a role in financing or presenting the mural, Harlem Park to Park and its affiliates want to clarify that the Black Lives Matter Harlem Street Mural is presented and 100 percent funded by Harlem Park to Park in partnership with Got to Stop Social Impact Agency. There were no funds or additional financial or in kind help provided by the Mayor, Department of Transportation, or any city entities to create the mural. “It is important to the Harlem community that we understand this project is a love letter to Harlem from Harlem.

We as a nonprofit organization in Harlem felt strongly that if a Black Lives Matter mural was coming to Manhattan, it should be in Harlem. With the help and advocacy of State Senator Brian Benjamin and Borough President Gale Brewer, we were able to successfully win permission from the DOT to secure the location and we moved forward by raising the funds, soliciting voluntary help and creating what we believe will be the world’s most photographed Black Lives Matter street Mural,” said Harlem Park to Park Executive Director, Nikoa Evans-Hendricks. 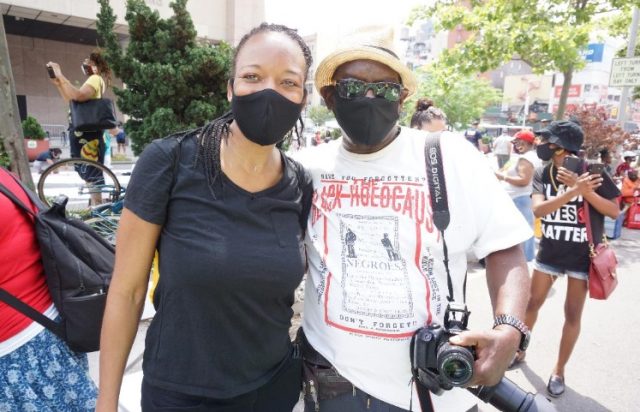 The organization wants to make this declaration in particular because the mural has been attacked already by a group called Streetriders NYC that brought 4000 bicyclists to ride over the newly painted mural on Saturday with the deliberate intent of destroying the mural they believed was a project of the city. The group was aggressive and disrespectful. The Streetriders NYC were pushing and shoving the mural organizers, the majority of whom are women, while declaring they would not discuss the matter with a woman. They removed the metal barricades and insisted that the riders roll over the murals with the intent to destroy them.

It should be noted that while this group’s leadership has not yet contacted Harlem Park to Park with an apology, several riders in the group have reached out to express their dismay in the way the bike leaders treated the organizers and to confirm that they left the ride after the act. This is not what the Black Lives Matter movement is about. It was an egregious act for a group like Streetriders NYC to make a point of coming to a black community to destroy a Black Lives Matter project created by and for this community while chanting the message “Black Lives Matter.”

The mural stretches down both sides of the median of Adam Clayton Powell Boulevard between 125th and 127th streets. The northbound side features works of 8 Harlem artists, including LeRone Wilson, Jason Wallace, Omo Misha, Guy Stanley Philoche, LesNY Felix, Thomas Heath, Dianne Smith and Joyous Pierce. The southbound was painted by 22 of Harlem’s community organizations.

The mural will be completed, with an unveiling now scheduled for Wednesday, July 8, at 10 am at the site of the mural.