Black Folks Worshiped In Own Spaces Before Slavery’s End From New York To Alabama, 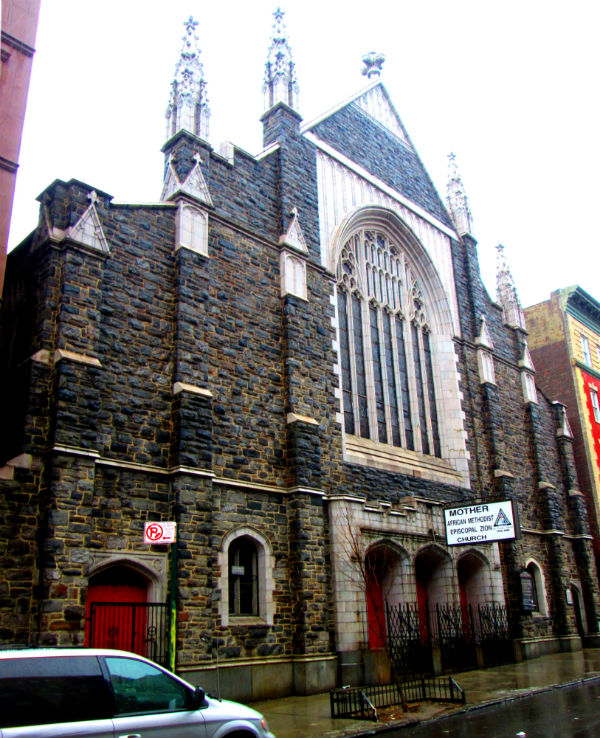 On a narrow street in Harlem sits the oldest black church in New York state, one of many black congregations that developed in the decades before slavery ended nationwide and that worked for its abolition.

“Mother AME Zion Church is without question, insofar as New York City is concerned,” says its new pastor, the Rev. Malcolm Byrd, “the grand depot of the Underground Railroad.”

As the nation marks the 400th anniversary of the forced arrival of Africans in Virginia — and New York notes the centennial of the Harlem Renaissance — this “Freedom Church” joins others that have represented the enduring faith of slaves, free blacks and their descendants. Historians say the total number is hard to determine but there were likely more than 100 black churches in existence before the 1865 ratification of the 13th Amendment, which officially abolished slavery.

A who’s who of black history figures worshiped and spoke at Mother African Methodist Episcopal Zion Church — including abolitionists Frederick Douglass and Sojourner Truth — when it was at earlier locations after its founding in 1796 or at its current neo-Gothic site on 137th Street in Harlem.

Truth joined Mother AME Zion in 1829 after leaving predominantly white John Street Methodist Church, where scholars say people of African descent could not serve in leadership and had to wait to take Communion until whites had partaken of the sacrament.

A group of black members left that white congregation in 1796 to form a separate church that included black licensed preachers such as James Varick, who later became the first bishop of the African Methodist Episcopal Zion Church, a denomination formed 25 years later.

“Put yourself in their situation,” said the Rev. William McKenith, historian for the 1.4 million-member AME Zion Church. “Here you are a human being, but by virtue of your circumstance, you’re being treated less than human, even in the church, and you want to express your humanity.”

McKenith said their quest for freedom from oppression was fueled by an amalgam of current history and personal experience: the American Declaration of Independence from Great Britain, the Haitian Revolution’s goal of conquering slavery and French rule, and their own African traditions that affirmed their humanity.

“The church from the very beginning was always talking about a liberation motif,” he said of the theological linking of salvation and freedom. “The gospel resonated with them and they saw the liberation aspect of the gospel and that inspired them. That was their inspiration — like the declaration was the inspiration of the country to form a new nation.”

Other prominent black churches where free blacks, former slaves and slaves worshiped in the 1700s and early 1800s include First African Baptist Church of Savannah, Ga.; Mother Bethel African Methodist Episcopal Church in Philadelphia; and Mother Emanuel AME Church in Charleston, S.C. Some, such as Mother Emanuel, had to worship underground when laws in their states were passed to prevent blacks from gathering on their own for worship or having their own preachers.

But, whether in established buildings or secret spaces, their congregants’ faith persisted along with their desire for freedom.

“The states are passing laws against behavior that already exists,” said the Rev. Cheryl Townsend Gilkes, professor of sociology and African American studies at Colby College.

“African Americans did not become Christian by default but they came out of slavery with a Christianity that was critical of the people who enslaved them.”

Blacks joined independent Baptist congregations and new denominations like the AME and AME Zion churches, leaving behind white churches and eventually white preachers, whose sermons to slaves — in sanctuaries and on plantations — often focused on Scripture passages about slaves obeying masters or left out portions of the Bible that told stories of exodus.

“All you have to do is look at the spirituals to see where African Americans were connecting with the Bible in spite of the fact that you had white missionaries who had a truncated Bible that they were sharing with slaves because they didn’t want them to know about Moses,” Gilkes said. “They didn’t want them to know about some of the liberative aspects of the Christian doctrine.”

Under the supervision of a free black man, a group including several slaves relocated the building — by rolling the building on logs, according to the church’s official history — to the site on the edge of the city where the congregation began in 1852, said Montgomery historian Richard Bailey.

A decade later, its first black minister, still a slave at the time, replaced white clergy who had previously served in its pulpit. And, as the AME Zion Church began its expansion into the South after the Civil War, Old Ship, known at one time as Clinton Chapel, joined the denomination.

Just like its AME Zion counterpart in New York’s Harlem, Old Ship attracted a range of prominent speakers over the years — including Douglass.

The 1974 history of the denomination, “The African Methodist Episcopal Zion Church: Reality of the Black Church,” notes that the New York church was one of the places where a large crowd of blacks welcomed him back to the U.S. in 1847. He had left for England two years before as a fugitive slave and returned a free, and much more well-known, man.

“What contrast is my present with my former condition? Then a slave, now a free man,” wrote Douglass of his return, as quoted in the AME Zion history book, “my name unheard of beyond the narrow limits of a republican slave plantation; now, my friends and benefactors people of both hemispheres, to heaven the praise belongs!”