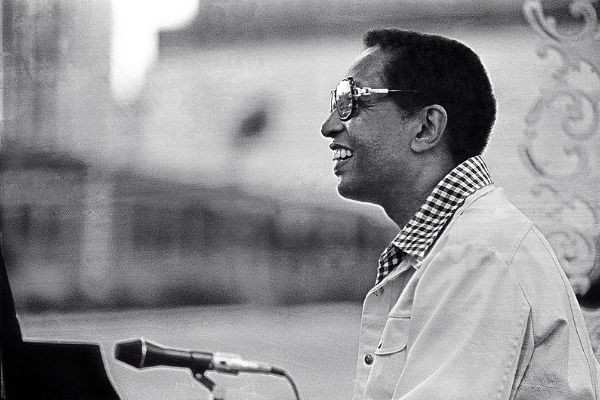 Dr. Billy Taylor, a jazz pianist, composer, educator and broadcaster, encompassed that rare combination of creativity, intelligence, and vision — qualities that made him one of our most cherished national treasures. He was born on July 24, 1921 in Greenville, NC to William Edward Taylor and Antoinette Bacon Taylor. When Billy was five, the family moved to Washington, DC where he began studying music with Elmira Streets. Billy attended Dunbar High School; he then attended and graduated from Virginia State College with a B.S. in Music in 1942, and later earned a Masters and Ph.D. in Music Education from the University of Massachusetts-Amherst. He also served as a Duke Ellington Fellow at Yale University.

Billy’s professional career began in 1944. He arrived in New York City on a Friday evening and immediately made his way to Minton’s Playhouse in Harlem. One of his idols, Ben Webster, happened to hear the young pianist play in what was then the hottest jam session in town. Webster invited Billy to audition for his group and, two days later, Billy became the pianist with Webster’s quartet at the Three Deuces on 52nd Street, alternating sets with the Art Tatum trio. Billy soon became a protégé of Art Tatum. From 1949-1951, Billy served as the house pianist at Birdland, the legendary jazz club, where he performed with such celebrated masters as Charlie Parker, Dizzy Gillespie, and Miles Davis. Starting in 1952, Billy Taylor led his own Trio and went on to perform with the most influential jazz artists of the twentieth century.

Billy’s recording and performing career spanned more than six decades. He composed over 350 songs, as well as works for theatre, dance and symphony orchestras. Among his most notable works is “I Wish I Knew How It Would Feel to Be Free”, achieving great popularity during the Civil Rights Movement. Nina Simone covered the song in her 1967 album Silk and Soul. After many years of recording for leading record labels, Billy started his own “Taylor Made” record label in 1989, releasing four albums, and in the late ‘90s, “Soundpost Records,” releasing his two final recordings.

As ambassador of jazz to the world, Billy coined the phrase that “Jazz is America’s classical music.” He was a pioneer in jazz education using every medium available to him to educate the world about jazz. In 1958, he served as Musical Director of the first television series ever produced about jazz, The Subject is Jazz. In 1964, Billy founded Jazzmobile, bringing jazz to the streets of Harlem and ensuring that jazz became a part of New York City schools. He also hosted and programmed jazz shows for such radio stations as WLIB and WNEW in New York, and created several award winning series for National Public Radio. In 1969, Billy became the first African American to serve as musical director for a national TV talk show, the David Frost Show, assembling arguably the best jazz band ever on TV. In the early 1980s, Billy became the arts correspondent for CBS Sunday Morning with Charles Kuralt. As CBS jazz correspondent for more than 20 years, Billy profiled over 250 members of the jazz community. He was one of only three jazz musicians appointed to the National Council of the Arts, and, since 1994, Billy served as the Artistic Advisor for Jazz to the Kennedy Center for the Performing Arts.

With over 23 honorary doctoral degrees, Dr. Billy Taylor was also the recipient of two Peabody Awards, an Emmy, a Grammy and a host of prestigious and highly coveted prizes, such as the National Medal of Arts, the Tiffany Award, a Lifetime achievement Award from Downbeat Magazine, and, election to the Hall of Fame for the International Association for Jazz Education.

Dr. Taylor passed away on December 28, 2010. His survivors include his wife of 64 years, Theodora, his daughter, Kim Taylor-Thompson, and his son-in-law, Anthony Thompson. A son, Duane, passed away in 1988. Dr. Taylor is also survived by his brother, Rudolph Taylor, and his sister, Joyce Hymes. He also leaves behind a sister-in-law, Valerie Fisher, and countless cousins, nieces and nephews

Marcus Miller began his studies in saxophone at age nine and, with the help of World Renowned Saxophonist Bruce Williams (Roy Hargrove, World Saxophone Quartet), he developed a passion that put him on stage professionally at 13. With gifts extending beyond the music, he graduated from Harvard University with a degree in Mathematics. After a short stint at a multi-billion dollar hedge fund he moved to New York City to pursue music. He soon developed a reputation as a versatile and virtuosic player, while studying music production and engineering under Grammy-winning Engineer “Bassy” Bob Brockman (Notorious B.I.G, Herbie Hancock, D’Angelo).

Marcus has performed at the Obama White House, Madison Square Garden, The Late Show with Stephen Colbert alongside Jon Batiste, Carnegie Hall, as well as recorded with Benny Blanco and Ryan Tedder. He regularly performs at major jazz venues like The Blue Note and Dizzy’s, is featured at the Daybreaker series of morning raves, and has toured internationally with various groups ranging from New Orleans Hot Jazz to Indie Rock. In addition, he is a speaker at the New Jersey Association of Music Educators, discussing music production and education, and was noted as an Artist of Distinction by the state of New Jersey.

The event is presented by the Harlem Cultural Archives Historical Society and Riverton Square Houses Management as part of the Jazz concert paying a birthday tribute to Dr. Billy Taylor – open to the public. The event will take place on Saturday, July 28th, 2018, from 4:00 p.m. to 6:00 p.m., at Riverton Square Complex – entrance on 135th St. between 5th and Madison Avenues closest to 2225 5th Avenue in Harlem.