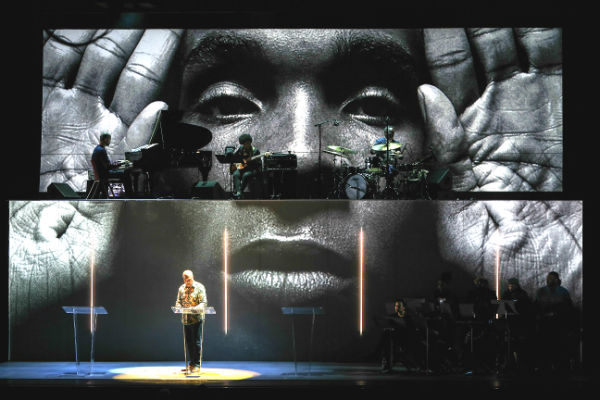 “For this staged adaptation, I really wanted to infuse the voices of Black changemakers and members of our community that would not only illuminate the language written by Ta-Nehisi, but also underscores the urgency in our communities surrounding the important and ongoing issues,” said Kamilah Forbes, Apollo Theater Executive Producer.

Throughout the development process of the Between the World and Me, Coates has been collaborating with the Theater, and he will now call the Apollo—widely considered the epicenter of Black culture—a home for the next three years as its inaugural Master Artist-in-Residence. The initiative kicked-off with a sold-out evening featuring Coates in conversation with Oprah Winfrey about his latest work, The Water Dancer , on the day on which it was chosen to re-launch Oprah’s Book Club. Subsequent programs in the residency will take place on the Apollo’s iconic stage and in the new Apollo spaces in the Victoria Theater in Fall 2020, further deepening the relationship between Coates and the Apollo.

Prior to the Harlem run, Between the World and Me will play for two performances at Atlanta Symphony Hall on Tuesday, October 22, presented by The Collective Culture in collaboration with the Apollo. With additional stops to be announced at a later time, the tour takes difficult but necessary conversations around Black life and death and places them center stage.

Related:  Hey Harlem, You Gotta Certify With The City

Harlem residents, employees, business owners, and students can save 50% on tickets to performances of Between the World and Me. Half-Off for Harlem tickets can be purchased in person at the Apollo Theater Box Office. Ticket buyers must provide proof of residence or work ID. Offer available only while supplies last. Half-Off for Harlem for this production is supported by JL Greene Arts Access Fund in The New York

With music at its core, the Apollo’s programming extends to dance, theater, spoken word, and more. This includes special programs such as the blockbuster concert Bruno Mars Live at the Apollo, 100: The Apollo Celebrates Ella, the annual Africa Now! Festival, and the New York premiere of the opera We Shall Not Be Moved . The Apollo is a performing arts presenting organization that also produces festivals and large-scale dance and music works organized around a set of core initiatives that celebrate and extend the Apollo’s legacy through a contemporary lens; global festivals including the Women of the World (WOW) Festival and Breakin’ Convention, international and U.S.-based artist presentations focused on a specific theme; and Special Projects, multidisciplinary collaborations with partner organizations.

Since introducing the first Amateur Night contests in 1934, the Apollo Theater has served as a testing ground for new artists working across a variety of art forms and has ushered in the emergence of many new musical genres—including jazz, swing, bebop, R&B, gospel, blues, soul, and hip-hop. Among the countless legendary performers who launched their careers at the Apollo are D’Angelo, Lauryn Hill, Machine Gun Kelly, Miri Ben Ari, Ella Fitzgerald, Sarah Vaughan, Billie Holiday, James Brown, Michael Jackson, Gladys Knight, Luther Vandross, and Stevie Wonder; and the Apollo’s forward-looking artistic vision continues to build on this legacy.