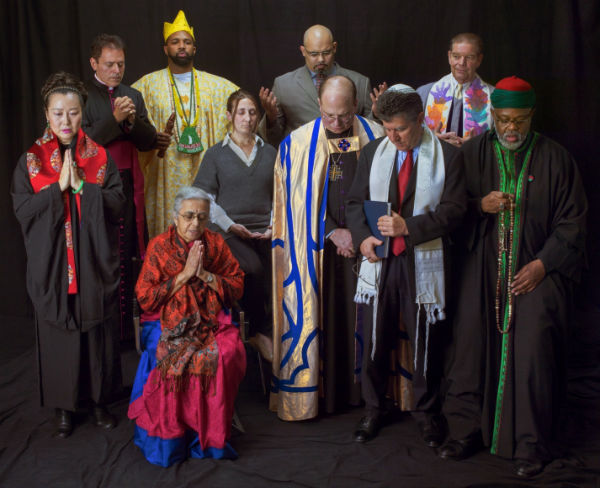 The BELIEF: The Prayer Project, an exhibition by photographer Neal Slavin, beginning Tuesday, March 10, 2020 at the Cathedral of St. John the Divine in Harlem, NY.

The works in this exhibition are taken from Slavin’s ongoing series exploring the practices and traditions of global faiths. Through the photos in this series, Slavin explores the fundamental need of people to gather together and connect spiritually in order to face life events beyond their individual understanding.

Slavin’s photographs capture sacred spaces and different prayer styles and customs around New York City, ranging from Islamic prayer services to Buddhist temple dedications. His interest is in the private spiritual experience captured on each face in a crowd of hundreds or even thousands: the moment of personal transcendence that can only be accessed as part of a larger community. The images invite perusal and meditation on the varied forms and meanings of prayer—a perfect project for the Lenten season.

The Cathedral has a long history of presenting art exhibitions, from meditative to challenging, historical to contemporary. Past exhibitions include The Value of Sanctuary:

BELIEF: The Prayer Project will be on view through May 2020.

His photography has been seen in publications including The Sunday Times magazine, Stern, Town & Country, Esquire, and The New York Times magazine. Slavin’s grants and awards include a Fulbright Fellowship in Photography, grants from the National Endowment for the Arts, and a number of awards from Communication Arts Magazine. In 1986, he was named as the Corporate Photographer of the Year by the American Society of Magazine Photographers. He was also awarded the 1988 Augustus Saint-Gaudens Medal and the 2005 President’s Citation by his alma mater, the Cooper Union. His photographs are included in the permanent collection of the Museum of Contemporary Photography in Chicago.