Barbados, Emory, Harvard, Rice, USC And Others Join Forces To Advance The Study Of Transatlantic Slavery 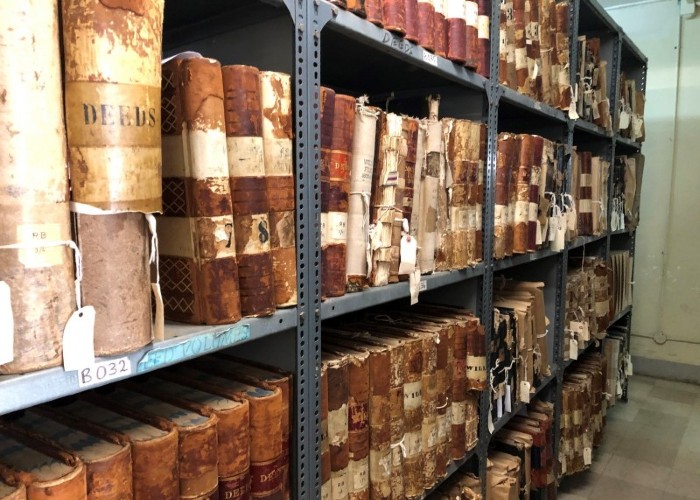 The University of the West Indies has joined with Emory, Harvard, Rice, University of California, the National Museum of African American History and Culture.

This also includes the Omohundro Institute of Early American History and Culture as a consortium member of SlaveVoyages, the preeminent online resource for the study of the trade-in enslaved Africans across the Atlantic.

The database, which is managed and operated by the consortium, has played an integral role in broadening access to archival materials–including ship registers, sales ledgers and recorded names of freed African people, among many other documents–relating to the traffic.

The University will work with SlaveVoyages to advance research and study of the Barbados Archives, comprising tens of millions of documents tracing the gut-wrenching stories of individuals captured in Africa, brought by ship to Barbados, and sold to colonial enslavers on the island and throughout the Americas.

Designed by David Adjaye (who designed the new Studio Museum in Harlem), the Barbados Heritage District will include a memorial and a major global research institute to house the archives within a museum located in Newton Plantation outside of the country’s capital.

Planning has begun to retrofit an existing facility that will support the massive digitization process of these archival records, anticipated to take five years to complete, in collaboration with global digitization technology partners.

The archives will then be moved for permanent storage and ongoing conservation at a new Heritage Centre planned for the Barbados Heritage District.

The Barbados Heritage District is being developed at the direction of Prime Minister Mia Amor Mottley, QC, MP, under the auspices of the ROAD (Reclaiming Our Atlantic Destiny) Project, a multifaceted initiative designed to transform the identity and economy of Barbados, providing unparalleled access to the history of the island nation, creating job growth and catapulting research and technological innovation.

“The inclusion of the University of the West Indies as the first non-US consortium member of SlaveVoyages marks an important next step in the advancement of the ROAD Project and of the Barbados Heritage District,” said Prime Minister Mottley. “The ROAD Project was conceived to deepen awareness and education surrounding the history of Barbados as it advances broader socio-economic goals. The work completed through SlaveVoyages will bring to light new insight into these difficult, yet immeasurably significant, histories as we continue to chart the future for our new republic.”

Stated consortium member Dr. Henry Louis Gates Jr, who serves as the Alphonse Fletcher University Professor and Director of Harvard’s Hutchins Center: “The remarkable breadth of the SlaveVoyages database has grown exponentially since it launched over a decade ago. It is now poised to expand its records even further from this globally significant endeavor by Barbados. The impact of the ROAD Project will be seismic, in its provision of detailed records of the trade-in enslaved people both on the island nation and throughout the Americas.”

“It is entirely fitting that the Cave Hill campus of the University of the West Indies located in Barbados should be invited as a first external member of this significant body of American universities with a dedicated focus on the history and pedagogy of the Transatlantic Slave Trade. Barbados was among the earliest and largest markets for enslaved African labor in the Americas; the first colony to be home to Africans as the largest social demographic, and the first country to enact a comprehensive Slave Code in which Africans were deemed as non-human and property forever,” stated Sir Hilary Beckles, Vice-Chancellor of the University of the West Indies. “The Cave Hill campus was built in the mid-20th century within an environment historically developed as plantations using enslaved African labor and the campus today is home to the only building in the Americas inspired by the West African architectural motif of the Ashanti Golden Stool, the resting place of the spirits of departed ancestors.  This constitutes an affirmation by the campus that the roots and legacies of the SlaveVoyages have been taken to the highest level of spiritual reflection and representation.”

“The University of the West Indies Cave Hill Campus is very pleased to be invited as a member of the SlaveVoyages consortium, the first non-US institution to be so honored. This comes at an opportune moment in the history of Barbados, as the world’s newest republic takes on global leadership roles in the slavery and reparations discourse,” said Prof Clive Landis, Pro-Vice-Chancellor and Principal of The University of the West Indies Cave Hill Campus. “UWI’s Cave Hill Campus will work collaboratively in deploying its research expertise to help analyze, publish and disseminate slavery records and artifacts housed in the Barbados Department of Archives and our own special collections. Our research will add value to the ambitious digitization project being undertaken as part of the ROAD Project.”

“Anyone who performs a search on the SlaveVoyages website about the traffic to and from Barbados will find that the sources documenting that forced movement comes almost exclusively from archives in Europe and North America,” said Dr Daniel Domingues da Silva, Associate Professor of History at Rice University and Host of the SlaveVoyages website. “This situation must not last. Now that Barbados has transitioned to a republic, it wants to open its archives and make its contents known to the world. SlaveVoyages offers an ideal means to that end, but that work will carry meaning only if Barbadian researchers participate in it.”

The origins of SlaveVoyages trace back to the 1960s as historians began researching data on the numbers of enslaved Africans to have crossed the Atlantic between the 16th and 19th centuries.

These data were eventually compiled to a CD-ROM published in 1999 and, in 2008, launched as a website hosted by Emory University.

In March 2021, the SlaveVoyages Consortium was formed, dedicated to preserving and developing what has become the most widely used online resource for the study of slavery across the Atlantic World.

Consortium members include the Emory Center for Digital Scholarship, the Hutchins Center for African and African American Research at Harvard University, the National Museum of African American History and Culture, the Omohundro Institute of Early American History and Culture at William & Mary, Rice University and three campuses at the University of California that will assume a joint membership: UC Santa Cruz, UC Irvine and UC Berkeley.

The website is currently hosted at Rice University, powered by Oracle for Research.

The Barbados Archives encompasses tens of millions of pages of documents of the Trans-Atlantic Slave Trade that trace the gut-wrenching stories of innumerable women, men, and children captured in Africa, brought by ship to Barbados and sold to colonial enslavers on the island and throughout the Americas.

Articulating Barbados’ national identity and dating back nearly 400 years, these materials–which include ship registers, sales ledgers, marriage licenses, and manumission papers, among many other documents and records–comprise one of the world’s largest catalogs of the British Trans-Atlantic Slave Trade.

Its digitization will enable Barbados to authoritatively map its history in lasting, healing and powerful ways, unearthing the as-yet untold heritage embedded in centuries-old artifacts revealing Barbados’ history and trajectory into the future.

The ROAD Project and the Barbados Heritage District

Commissioned by the Office of the Prime Minister of Barbados, the ROAD (Reclaiming Our Atlantic Destiny) Project is designed to transform the identity and economy of Barbados, providing unparalleled access to the history of the island nation, create job opportunities, stimulate tourism and help catapult research and technological innovation so as to deepen ties of the new parliamentary republic with other nations around the world.

Prime Minister Mia Amor Mottley, QC, MP, has described the ROAD Project as “a moral imperative and an economic necessity” for Barbados, and one of the most significant projects ever undertaken since the country’s Independence.

The ROAD Project is led by the Prime Minister’s Office in tandem with the ESAIYO/LMI Consortium, consisting of experts in relevant disciplines together with Barbadian institutions, including the University of the West Indies, the Archives Department, and the Barbados Museum and Historical Society.

The Barbados Heritage District is being developed at the direction of Prime Minister Mottley, under the auspices of the Road Project, and is dedicated to accurately recounting the historic and contemporary impact of slavery on Barbados and on the lives of individuals, cultures, and nations of the Western hemisphere.

Announced in December 2021 in the wake of Barbados’ transition to the Parliamentary Republic, the District is being designed by David Adjaye (who completed the new Studio Museum in Harlem) and will comprise a memorial, a major global research institute, and a museum, located in Newton Plantation outside of Bridgetown.

Collectively, the resources and institutions that are part of the District will serve as a cornerstone and catalyst for the ongoing development of Barbados’ independent identity, culture and place on the world stage.

Photo credit: A selection of materials from the Barbados Archives, which will become publicly accessible online as part of SlaveVoyages.