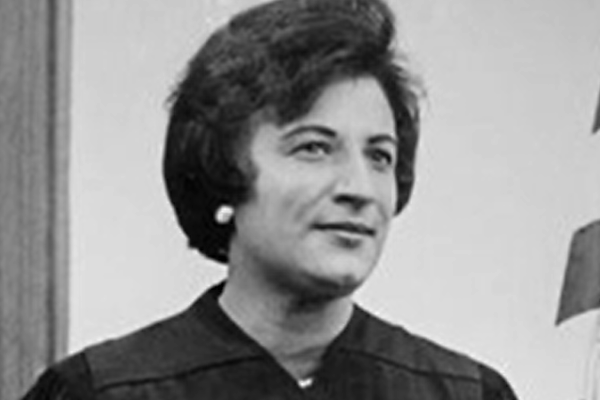 They do this by dedicating a conference room in the B.P.’s Municipal Building offices in Motley’s name and installing a plaque ahead of the new Juneteenth holiday this weekend. Motley’s son, Joel Motley, also attended the ceremony.

Constance Baker Motley served as Manhattan Borough President February 24, 1965–September 8, 1966, the first woman– and the first Black woman — to do so.

The Constance Baker Motley Conference Room is where press conferences and monthly meetings of the Manhattan Borough Board take place in the Manhattan Municipal Building.

Motley was hired by the NAACP Legal Defense Fund after her graduation from Columbia Law School, working for Thurgood Marshall, and wrote the original complaint about Brown v. Board of Education.

She was the first Black woman to argue a case in front of the Supreme Court (James Meredith’s case against the University of Mississippi).

In 1965, she was elected Manhattan Borough President, which then had a vote on the city’s Board of Estimate, and the next year was appointed the first Black woman to serve as a federal judge by President Lyndon Johnson.

“Constance Baker Motley was a fighter, a pioneer, and a role model for Black women in New York and all over the country with a distinguished career in public service and jurisprudence,” said former Manhattan Borough President C. Virginia Fields. “I hope that today’s dedication of the Constance Baker Motley Conference Room will inspire people to learn more about her legacy at the NAACP, at the Manhattan Borough President’s office, the State Senate and the federal judiciary.”

“Constance Baker Motley’s life–and her three careers– is one of those amazing stories,” said former Borough President Ruth Messinger. “A first-rate lawyer at the forefront of the civil rights movement, who then became an elected Borough President and member of the City Board of Estimate and then was appointed the very first Black woman Federal judge. I’m thrilled to help honor this true pioneer today.”

Juneteenth commemorates June 19, 1866, when the enslaved people of African descent in Galveston, Texas, were told more than two years after President Abraham Lincoln signed the Emancipation Proclamation and months after the 13th Amendment was ratified by the states.