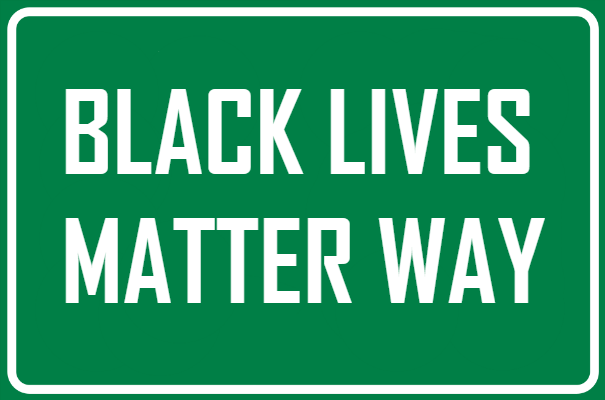 Manhattan Borough President Gale A. Brewer and Council Member Margaret Chin commended the administration for responding to their request in agreeing to name and paint a section of the Civic Center “Black Lives Matter Way.”

“Renaming and repainting a street is a modest testament to the massive challenge ahead of us, said Manhattan Borough President Gale A. Brewer. “But in so doing we will, literally, set down a marker for our current goals and mark this era for future generations. I’m a history buff; as New Yorkers and visitors walk downtown past some of America’s most historic landmarks, ‘Black Lives Matter Way’ will add to that history.”

“‘Black Lives Matter.’ We have seen the best of New York City when people come together and take to the streets to affirm these words boldly and courageously, and now we will be able to see this every time we walk downtown to some of the most important buildings and landmarks in our city’s government and history,” said Council Member Margaret Chin. “At a time when monuments to eras of racism all over the country are being taken down, we need to be putting up symbols of racial justice, resistance, and pride that unequivocally affirm the value of Black lives in our city. I am proud to join my colleagues in the New York City Council to pass our long-overdue package on police reform and am committed to fighting for a budget that includes meaningful reductions to the NYPD budget and reinvestments in our communities. We must continue the work to turn these words into action and real systemic change.”

New York City’s African American heritage of resistance dates back to the city’s origins in the 1620s,

Borough President Brewer is today to the NYC Council Committee on Public Safety in support of Int. 536-A designating the use of chokeholds and other deadly techniques like placing a knee on a person’s neck as a misdemeanor, and Int. 1309, adopting a disciplinary matrix for the police department and requiring that these guidelines be made publicly available.

In addition, Brewer is calling to reduce the NYPD budget and to reallocate those funds for youth programming and social workers, and for the following additional reforms: