Azealia Banks Got Into A Twitter Fight With Sarah Palin, And Now Palin’s Suing Her Update: Well this just became even more of a s**tshow. Sarah Palin is suing Harlem’s Azealia Banks, according to People.

“I think this time I don’t just sit back and swallow it, but put the fear of God in her by holding her accountable,” she told People. “As many of you have for years implored me to do, I’m finally going to sue.”

“I’ve had enough of the unanswered threats and attacks against my family and me,” Palin continued in a statement. “So, for the first time I’m going to enjoy the only retribution some protected ‘celebrities’ seem to understand – I’m suing Azealia Banks and can’t wait to share my winnings with others who have gone defenseless against lies and dangerous attacks far too long.”

Her statement continues to note that it’s so unfair how “if a white girl were to say what this black girl is saying, the screams for the entire white population’s head would be louder than the nonsensical rap that Azealia Banks spews all the way to the bank.”

Banks has posted a letter to Palin on her Tumblr account. It’s half apology, and half explanatory burns. Read it here.

Harlem born firebrand rapper Azealia Banks got in a fight on Twitter with… [spins lottery wheel] … Sarah Palin, the former governor of Alaska. Sure, why not?

What happened was that the Slay-Z artist read a hoax article on an Onion-wannabee satire site that falsely claimed that Palin had said “slavery wasn’t forced onto African-Americans, they accepted it willingly.” Now, the one-time vice presidential candidate has said some pretty reprehensible things, but this quote wasn’t one of them. Nevertheless, a misguided Banks fired back in a series of now-deleted tweets. (Screenshots via Paper). 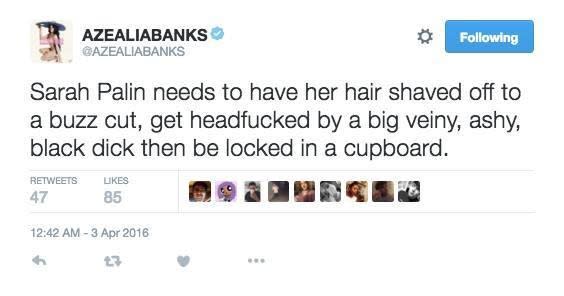 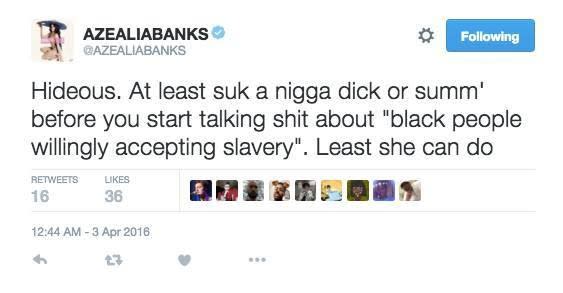 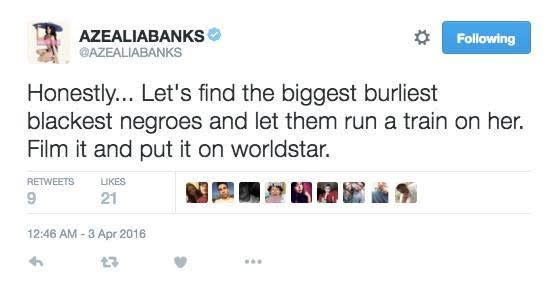 Once Banks realized that the quote was bogus, she deleted her, uh, strongly worded tweets, though the “212” rapper continued to post links and messages criticizing Palin’s real-life actions and words.

On Tuesday, Palin finally responded to Banks’ offensive tweets. In a Facebook post, Palin addressed the 24-year-old artist only as “Female Rapper,” and went on to implore Banks to use her “influential platform” so they can “work together on something worthwhile – like condemning racism, along with empowering young women to defend themselves against a most misogynist, degrading, devastating assault perpetrated by evil men – rape.”

However, in her original posting (which can be seen via Facebook’s view edit history feature), Palin actually wrote “like condoning racism,” instead of condemning. It was probably just a typo.

If there ever was a fight that had no winners, this is it. Check out Palin’s response below.

Hey Female Rapper – listen up, little darling. No one has any idea what you’re wigging out about in these bizarre,…