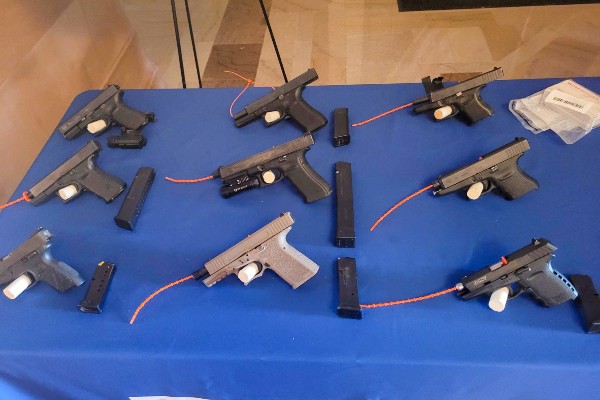 New York Attorney General Letitia James today announced the indictment of 47 individuals for their roles in two major drug and firearm distribution networks from Harlem to the Hudson.

These networks trafficked heroin, cocaine, oxycodone, and firearms in the Capital Region.

As alleged in the indictments, unsealed in Albany County Court today, this year-long investigation seized nearly 1.2 kilograms of cocaine, 140 grams of heroin mixed with fentanyl, oxycodone, $40,000 in cash, and nine firearms, including one “ghost gun.”

“For the past year, Albany and the surrounding areas have been plagued by violent crime that has terrorized our communities and claimed too many lives,” said Attorney General James. “These individuals have allegedly flooded our streets with dangerous narcotics and are responsible for many of the shootings that have been at the center of this devastation. Today’s takedown is yet another major action to combat violent crime and hold accountable those who seek to endanger our communities. We will continue to take every action possible to get guns off our streets, and I thank the Albany Police Department, and all our partners in law enforcement, for their support in protecting our communities.”

“Dangerous drugs and weapons have no place in our communities,” said Albany Police Chief Eric Hawkins. “Today, we’re sending a strong message that we will use all available resources to address violent crime in our neighborhoods and remove any offenders responsible from our streets. Through operations, such as ‘Cross Town Quarantine,’ we remain committed to working collaboratively with our law enforcement partners to ensure that our communities remain safe. I’d like to commend Attorney General James for her leadership, as well as her unwavering support to our agency and overall safety of the Albany community.”

Today’s takedown was the result of a joint investigation between the Office of the Attorney General’s (OAG) Organized Crime Task Force (OCTF), the Albany Police Department, and the FBI Safe Streets Task Force. The investigation — dubbed “Operation Crosstown Quarantine” — centered on two rival crosstown gangs in Albany and included the use of physical surveillance, electronic surveillance, and undercover operations. During the course of the investigation, in addition to communication by cell phones, the defendants repeatedly relied on social media, specifically Facebook and Snapchat, to sell and procure drugs and brazenly brag and display illegal firearms.

The first conspiracy centers around the “Uptown Associates” gang and the leader of this drug distribution network: Jamar Brayboy, a/k/a “Un.” Brayboy employed a vast network of individuals to sell his drugs and had numerous reseller customers that brought heroin and cocaine from New York City to sell in and around the Capital Region, as well as New York and Orange counties, and even had resellers bringing drugs to Vermont. Brayboy also relied on Facebook to illegally sell his narcotics.

The second conspiracy centers around the “Downtown Associates” gang and the leader of this drug distribution network: Tyshawn Morris, a/k/a “Mac.” Morris also employed a large network of sellers and resellers who primarily operated in Albany, Fulton, Montgomery, Rensselaer, Saratoga, and Schenectady counties. Morris is being charged with Operating as a Major Trafficker, which carries a mandatory life sentence in state prison. The defendants and their co-conspirators frequently utilized coded and cryptic terminology in an attempt to disguise their illicit activities. In addition to the usual codes — such as referring to crack cocaine as “hard” and powder cocaine as “soft” — Morris used common street terms for marijuana and to refer to cocaine, in an attempt to confuse law enforcement, in the event they were monitoring his activities. For instance, Morris and his associates referred to crack cocaine as “Sour” and powder cocaine as “Kush,” both common names for marijuana.

During the course of the investigation, OCTF was able to establish that numerous members of the “Downtown Associates” were utilizing Snapchat in order to traffic illegal prescription drugs, namely oxycodone. Keion Kirkley, El Shaquille Douglas, and Daion Morris regularly sold illegal prescription medication (oxycodone and others) over Snapchat by posting pictures and/or videos of pill bottles marked “Oxycodone” with captions, such as “Boots! Rp 10s Rp 20s & Green 15s GWM,” referring to prescription pills (“boots”) for sale, “GWM” (get with me), and what milligram strengths were available, 10mg pills, 20mg pills, etc.

Other members of the “Downtown Associates,” known as the “50 Gang” — a reference to the high-capacity magazines that they attach to their firearms, which allow them to hold up to 50 rounds of ammunition — were utilizing Snapchat to post videos and pictures of illegal weapons, which they and their fellow members used to carry out their gang violence activities. Members regularly posted videos and pictures of themselves possessing handguns, rifles, and machine guns, usually with high-capacity magazines protruding from the gun. Members of the “50 Gang” range from 18 years old to 25 years old, and they are considered by law enforcement to be responsible for numerous drive-by shootings and homicides that have been plaguing the City of Albany over the past year, including the recent fatal shooting of an 18-year-old in downtown Albany.

Today’s takedown marks the latest major drug bust in the OAG’s Suburban and Upstate Response to the Growing Epidemic (S.U.R.G.E.) Initiative, a law enforcement effort that brings together state and local law enforcement to target New York’s growing — and often violent — heroin, opioid, and narcotics trafficking networks. Since launching in 2017, SURGE has taken 644 alleged traffickers off the streets.

The first indictment contains 521 counts and charges 33 people with crimes in relation to their involvement in the narcotics trafficking operation, including Operating as a Major Trafficker (class A-I felony), Criminal Sale and Criminal Possession of a Controlled Substance (class A, B, and C felonies), as well as Conspiracy in the Second degree (class B felony). 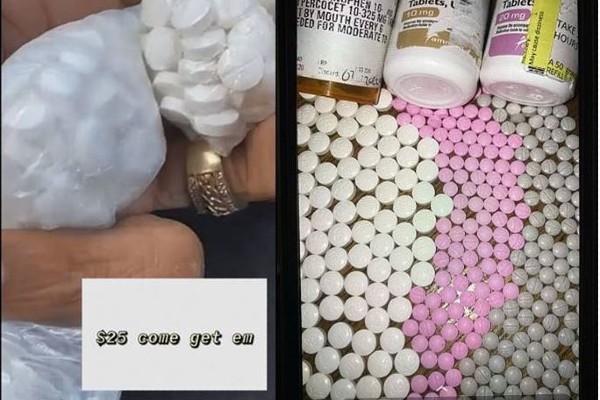 Those charged in Indictment One include:

The remaining indictments contain 196 counts and charge 14 people with crimes in relation to their involvement in the narcotics trafficking and weapons possession, including Enterprise Corruption (class B felony), Criminal Sale and Criminal Possession of a Controlled Substance (class B felony), and Criminal Possession of a Weapon (class C, D, and E felonies).

Those charged in the remaining indictments are:

“I thank Attorney General James and her staff for dedicating time and resources to these cases,” said Albany County District Attorney David Soares. “The influx of illegal weapons and drugs in our communities has left many people scared to even be outside in Albany. These indictments illustrate a message that criminal activity will be investigated and prosecuted. I am grateful for this partnership and the dedication to making our communities safe for all.”

“I commend the hard work of the attorney general’s Organized Crime Taskforce, the FBI Safe Streets Task Force, and the Albany Police Department in helping to put a stop to the violent crime we have been experiencing in the City of Albany,” said State Senator Neil Breslin. “Partnerships such as this provide the justice and resolve that city residents have been calling for.”

“Anytime we remove large amounts of illegal drugs and firearms from our streets we save future lives and improve the public’s safety,” said State Assemblymember Patricia Fahy. “I commend and thank Attorney General Letitia James and her office’s Organized Crime Task Force agents, the FBI’s Safe Streets Task Force members, and Albany Police Department officers for their work in bringing those who flood our local communities with illegal weapons and firearms to justice.”

“Our community, like many others, has struggled with an uptick in violence and too many innocent lives have been taken by gun violence in the Capital City,” said State Assemblymember John T. McDonald III. “This violence is a direct result of the illegal drug and firearm trade that has been rampant in communities. I am glad to see the results of the coordinated efforts by the New York attorney general’s Organized Crime Task Force, the FBI Safe Streets Task Force, and the Albany Police Department to arrest these individuals who have caused significant trauma, not only to the families who have lost a loved one, but also to the many individuals and families who live in our neighborhoods and have concerns for their own safety. Thank you to the attorney general for her leadership and to all involved who work towards bringing those who cause harm to justice.”

“My message to violent criminals continues to be clear: If you possess an illegal gun in Albany, we will do everything in our power — including partnering with federal, state, and local law enforcement authorities to find you, arrest you, and put you in jail for a very long time,” said City of Albany Mayor Kathy Sheehan. “These arrests are further proof that our partnerships with New York Attorney General Letitia James and the FBI are helping enhance public safety, and that we will continue to work alongside one another to bring violent individuals to justice.”

In addition to law enforcement partners, Attorney General James would also like to thank Albany County District Attorney David Soares for his assistance in this investigation. 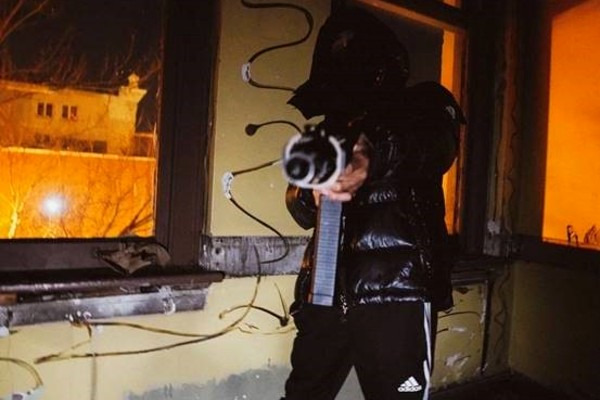