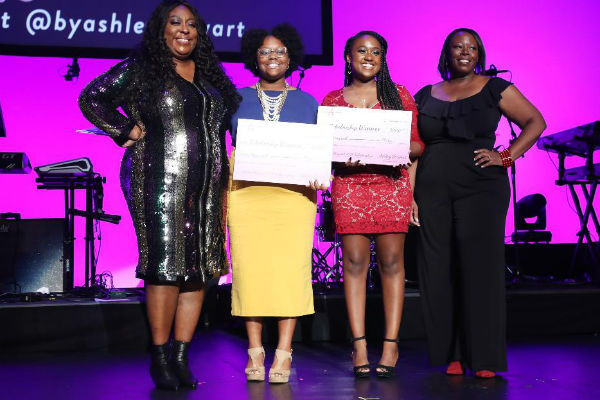 Ashley Stewart, a leading lifestyle, fashion and social commerce brand, announced today its 2020 initiatives for taking the neighborhood girl global. As part of the company’s ongoing mission to further women’s empowerment, inclusivity and body positivity, Ashley will be kicking off its fourth annual 2020 Finding Ashley Stewart tour and #AshleyCollegeTour initiatives. Additionally, Ashley Stewart will be teaming up with Emmy Award winning comedian, Celebrity Host of The Real

and longtime friend, Loni Love, throughout 2020 for both fashion collections and the Finding Ashley Stewart tour.

This year marks the fourth year in which Ashley Stewart is both searching for its brand ambassador through the nationwide Finding Ashley Stewart tour and investing in the future through the #AshleyCollegeTour Scholarship Leadership Program. Loni Love will continue to demonstrate her loyal support for the brand and the tours by hosting the renowned Finding Ashley Stewart Finale for her third consecutive year, which is taking place at a new home, the iconic New Jersey Performing Arts Center in Newark, NJ, on Saturday, September 12th,, 2020. Performers and celebrity judges will be announced over the course of the spring. Tickets for the Finale on September 12th will become available this spring both in select New Jersey and New York Ashley Stewart stores (like the one in Harlem) and online via Ticketmaster.

In addition to her role supporting and hosting the Finding Ashley Stewart Tour, Loni Love will expand upon the success of her first-ever fashion partnership during Holiday 2019 by working with Ashley Stewart once again to curate three new collections throughout the coming year. To show Loni’s continued dedication to providing stylish clothing to Ashley customers, the collections will consist of trend-focused pieces curated by the comedic icon herself, offering consumers a peek into Loni’s Ashley Stewart closet.

“As someone who has been wearing Ashley Stewart for years, I couldn’t be more excited to continue and expand upon my partnership with the team to begin this new adventure,” said Loni Love. “Ashley Stewart’s commitment to investing in women of all curvy shapes, sizes and backgrounds through their partnerships, initiatives and programs is truly empowering and a personal mission I hold close to my heart. Ashley Stewart is much more than a fashion retailer – they are a powerful ecosystem with whom I’ve become deeply connected. I am Ashley Stewart, and I am honored to continue to support this brand and neighborhood girls around the world.”

Kicking off this month, the nationwide Finding Ashley Stewart Tour searches for the brand’s 2020 ambassador – a woman who effortlessly embodies what Ashley Stewart stands for: kindness, resilience, confidence, leadership and, of course, fashion – and culminates in the highly-anticipated and sold-out Finding Ashley Stewart Finale, featuring special celebrity guests, live music and so much more. To get involved, contestants can enter the search online at Finding Ashley Stewart. All women are encouraged to also attend one of the six physical tour stops: Atlanta, Georgia on February 22nd, Dallas, TX on March 21st, Detroit, MI on April 25th, Bowie, MD on May 16th, Philadelphia, PA on June 20th and Brooklyn, NY on July 11th. Last year, over 1 million votes were cast to decide on the eight finalists, chosen from tens of thousands of hopefuls, who attend the live Finale.

“Ashley Stewart is committed to empowerment, self-expression and community building. Together with our customers, we have built a powerful community with outsized influence” said James Rhee, Ashley Stewart Executive Chairman and CEO. “Continuing our friendship with Loni Love is a natural progression of our years of partnership, and we couldn’t be happier to showcase her with our Ashley community.”

Ashley Stewart is a global fashion and lifestyle brand that has propelled itself to be on the vanguard of social commerce and purpose-driven business. Since its founding in 1991 in Brooklyn, New York, Ashley Stewart has always stood for uncompromising style, fashion, confidence & empowerment for the woman who flaunts her curves. Today, Ashley Stewart offers the hottest looks with 88 stores across the United States, a leading and global e-commerce presence at www.ashleystewart.com, a powerful social media presence @byashleystewart and a growing multimedia and events arm at AshleyTV. Every year, through the Finding Ashley Stewart Tour, Ashley Stewart traverses the country looking to recognize women who embody the ideals of the Ashley Stewart women: kindness, resilience, confidence, and community leadership. Through #ASGives, Ashley Stewart engages in programs such as the #AshleyCollegeTour to make long-term investments into the communities that have supported the brand for close to 30 years.