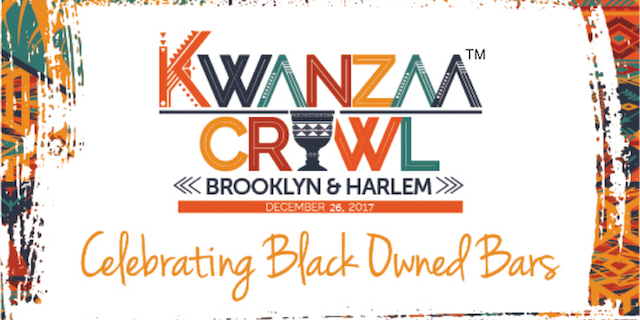 Kwanzaa, the week-long holiday celebrating black culture, heritage, and family, is the theme for the yearly bar crawl that takes place in New York City in the neighborhood of Harlem and the borough of Brooklyn. New York’s fourth annual Kwanzaa Crawl kicked off with a ceremony recognizing the holiday’s seven core principals of African heritage that include unity, self-determination, and purpose.

The Kwanzaa Crawl was conceived by sisters Kerry Coddett and Krystal Stark who aim to demonstrate the black buying power while operating under the seven principles of Kwanzaa. It also brings awareness to black-owned businesses while supporting the local black economy in the process.

The Kwanzaa Crawl takes place on the first day of the holiday based on the principle of Umoja: Unity: To strive for and to maintain unity in the family, community, nation, and race. This year’s theme was “Black to the Future.”

“Half of the business we collaborate with are women-led. Last year, we had over 4,100 Crawlers generate over $250,000 in one day for participating businesses. This year we expect about 5,000 participants to take the streets to build community and economic empowerment in real time.”

Picture this: crawlers are divided into 65 teams each led by a “turnt” tour guide with a music-playing bullhorn, 5,000 people round-robin from bar to bar, in two different boroughs, at the same exact time. Teams split up, crisscross, and join up to make bigger ones in an 8-hour day full of fun.” Coddett and Stark told The Root.

“We think it’s important to keep the ‘Kwanzaa’ in the Kwanzaa Crawl, because it’s not just a bar crawl, it’s not JUST about partying,” says Krystal. “So we start with setting intentions, letting [the crawlers] know about Kwanzaa, letting them know how this crawl relates to Kwanzaa, and how they can carry out the principles throughout the rest of the year and not just a one-day event,” adds Stark.