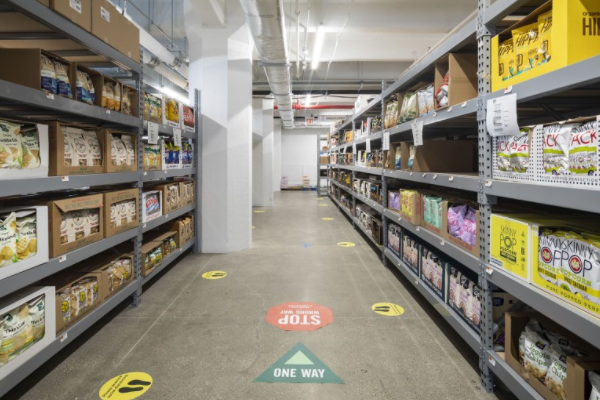 With many Harlemites shopping more and more from home during the COVID crisis, it is great to hear that Amazon has taken the wraps off of its concept for the supermarket of the future.

Amazon Fresh stores will be like just about any other grocery store except that it will be built around technology.

The first Amazon Fresh store, named for Amazon’s grocery delivery service, is in the process of opening its doors in Woodland Hills, in the Los Angeles metro.

Amazon is already firmly planted in the grocery business, owning Whole Foods Market. That chain is designed to appeal to consumers who prefer natural and organic products. Shoppers won’t find Coca-Cola or some other mainstream products in its aisles.

For example, how many times have you wandered the aisles of a large supermarket trying to find a particular item? At Amazon Fresh, shoppers will find Amazon Echo Show smart displays throughout the store, guiding them to the proper aisle for whatever they might be looking for.

The shopping carts are also packed with technology. The stores will feature the Amazon Dash Cart that scans items as you put them in the basket, links to online shopping lists, and provides checkout services.

Shoppers will use their Amazon app to “log in” to their cart. As they pick up items and put them in the cart, onboard scanners record the items using bar codes. For produce, the cart weighs the item and calculates the price.

“Grocery is a very large consumer sector; by most measures, it’s $800 billion in the U.S.,” Jeff Helbling, vice president of Amazon Fresh stores, told CNN. “And collectively, we’re relatively small in the space.”

But Amazon has plans to get bigger. In addition to its Whole Foods chain, the company has pioneered a number of cashless convenience stores called Amazon Go that are also heavily dependent on technology.

Amazon opened its first Amazon Go store in Seattle in early 2018. Shoppers are able to move down the aisles, pick up items, and then go on their way without having to pass through a checkout line.

Cameras and sensors placed on items and around the store will carefully track what consumers take, then charge their credit cards. That requires consumers who want to shop at the futuristic store to have a smartphone and to download the Amazon Go app.

The new Amazon Fresh stores will employ a similar concept. After the Los Angeles area store opens, Amazon has plans to open six more — three more in California and three in Illinois.