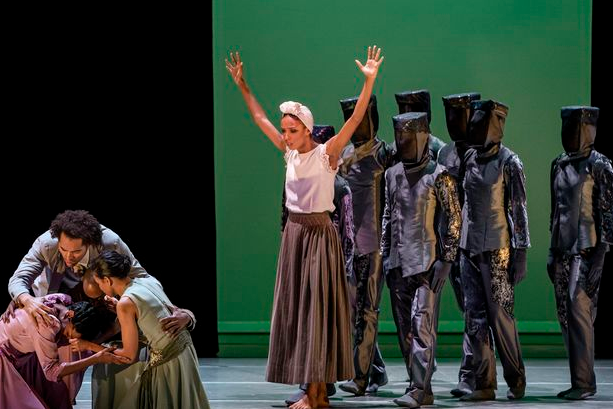 The Ailey organization continues to use dance to inspire, educate, and unite all in a universal celebration of the human spirit through Ailey All Access.

A series of online offerings including free streaming of performance broadcasts, conversations, Ailey Extension dance and fitness classes, and more.

Alvin Ailey American Dance Theater was born out of the Civil Rights Movement when visionary founder Alvin Ailey saw the need to celebrate the lives and stories of African-Americans and understood the power of dance as a weapon for social change.

“The Greenwood Story” program on Wednesday, May 26 at 7 pm EDT features excerpts from Donald Byrd’s riveting ensemble work, that draws on the 1921 Tulsa Race Massacre as a source,  the documentary “Black Wall Street Remembered,” and a deeper look into the creative process with a behind-the-scenes video.

Set to music by Israeli violist and composer Emmanuel Witzthum, Greenwood navigates through one of the worst incidents of racial violence in US history and explores the story through different lenses of those who were affected.

Coinciding with this year’s “Remember & Rise” activities planned by the 1921 Tulsa Race Massacre Centennial Commission, the broadcast is augmented by Ailey’s blog containing further details and resources to expose this shocking history that had been covered up for generations.

There is still a limited time to enjoy the broadcast of a new film adaptation of Jacqueline Green interpreting the extraordinary solo Cry through May 23.

Now celebrating 50 years, the work was created as a birthday present for Alvin Ailey’s mother Mrs. Lula Cooper and is dedicated to “all Black women everywhere – especially our mothers.”

For further updates on the spring series of free online performances, visit Ailey All Access and www.alvinailey.org.

Ailey Extension is increasing its virtual options for students of all ages with two new classes for adults and a four-week session for kids as young as 5 years old.

Starting June 2, ballet lovers can build on their existing skills and dance terminology in Intermediate Ballet with Noriko Hara each Wednesday at 11 am EDT.

Dancers can spend each Monday at 6:30 pm EDT exploring fun and free-spirited urban street style when Afro’Dance with Angel Kaba returns starting June 7 to teach students how to move to the latest music trends coming from West Africa.

Children ages 5-17 can get moving during the Kids & Teens Online Summer Session which runs from Saturday, June 5 – Sunday, June 27.

The four-week session offers a diverse roster of age-appropriate classes for kids to explore different dance styles in a judgment-free zone surrounded by their peers.

These new offerings are part of more than 30 weekly classes available from Ailey Extension, which allow students all over the world to explore different dance styles seven days a week.

Ailey All Access replaces the performances that would have been seen during Ailey’s National Tour.

The 2021 North American Tour is supported, in part, by the National Endowment for the Arts.

This production of Cry was made possible with generous support from Judith McDonough Kaminski &
Joseph Kaminski.

The original production of Cry was made possible, in part, by a grant from Ford Foundation.

In addition to being the Principal Dance Company of New York City Center, where its performances have become a year‐end tradition, the Ailey company performs annually at the John F. Kennedy Center for the Performing Arts in Washington, DC, the Auditorium Theatre in Chicago, The Fox Theatre in Atlanta, Zellerbach Hall in Berkeley, CA and at the New Jersey Performing Arts Center in Newark  (where it is the Principal Resident Affiliate), and appears frequently in other major theaters throughout the world during extensive yearly tours.

The Ailey organization also includes Ailey II (1974), a second performing company of emerging young dancers and innovative choreographers; The Ailey School (1969), one of the most extensive dance training programs in the world; Ailey Arts in Education & Community Programs, which brings dance into the classrooms, communities and lives of people of all ages; and The Ailey Extension (2005), a program offering dance and fitness classes to the general public, which began with the opening of Ailey’s permanent home—the largest building dedicated to dance in New York City, the dance capital of the world —named The Joan Weill Center for Dance, at 55th Street at 9th Avenue in New York City.